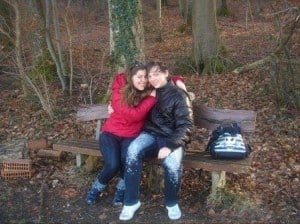 I guess I will start by introducing your readers to the members of my family.

My name is Uila, I am married to the love of my life, Anton. Before I tell you our cat's story, I have to tell you a little of ours.

We met on-line, in October of 2008, I was planning to visit relatives in Switzerland for two months and had no friends in Europe, so I added some random people on skype, from Switzerland and Germany, (guys and girls, I really was only after friendships), one of those random contacts turned out to be Anton.

We spoke for 2 months before I went from warm Brazil to cold Switzerland, by that time, we had decided to meet in person. I tried to convince my aunt and uncle that he wasn't a serial killer, and failed. They wanted to meet him, and so they did, the same day and moment as I did, mind you. They interrogated him, got the address and name of five generations back on both his mother and father side (there might be a little exaggeration here on my part) and finally got to the conclusion the internet might have nice people, sometimes. Either that, or this Anton kid was the exception to the serial killer/stalker/weirdo rule.

We started dating the same day we met in person, 27th of december of 2008, after almost one month exactly, on 26th of january of 2009, we officially became boyfriend and girlfriend.

In february I returned to Amazon, where I am from in Brazil and where I lived my whole life. Five months after I came to Germany to visit Anton for one month (during which we had an amazing time, including a  trip to Paris, which he surprised me with as a gift to celebrate our 6 months together) and returned to Brazil again. Six months after, in january of 2010, I moved to Germany and we moved in together.

I will skip a lot here, after all, we got to the point of the story where we are both in the same country, and I have yet to talk about our cats!

He asked me to marry him, it was really romantic. He popped the question with the aid LED lights he made in the garden. Here is the link to a video, if anyone wants to see it:

We moved to a bigger flat in april of 2012, already with plans to adopt a pet. It turned out our landlord doesn't allow dogs, the animal I had during my whole life, but he did allow cats. I never had cats, because my father has asthma, so I started my research.

During my periods of research, someday I googled cuddly cat breed, or something like that, and one of the first results was a website talking about ragdolls.

Ever since I read the first words about this breed, and ever since the very first picture I saw of a ragdoll cat, I knew this was the cat for me. I like bigger pets, so I can hug them better without being afraid to break them, so to discover ragdolls are a large breed cat was bonus points. The next step was to find a ragdoll breeder in Germany. I was craving the sound of paws running around the flat, but took my time to choose the breeder, after all, this was a commitment of maybe 15 plus years, I had to make sure it was the right breeder.

The breeder in case is Tramuntana Ragdolls, in Cologne, Germany. 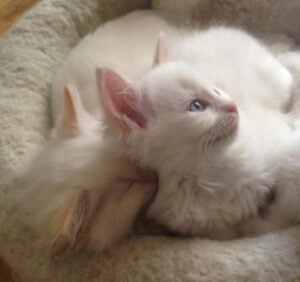 My husband and I went on a road trip to meet the kittens and choose the ones that would be ours. The choice was made for us, two kittens of the same litter chose us. We just had to name them, but we had already chosen the names: Elvis and Einstein.

A picture from the first time we saw them, Einstein is the one sleeping in the picture and Elvis is the one with eyes wide open.

Another picture from the first time we saw them, Einstein is the one laying down and Elvis is the one sitting. 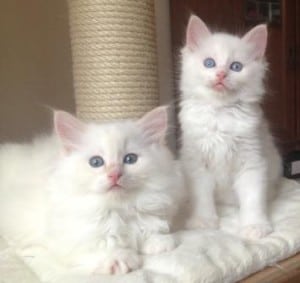 I started a blog, mainly to have a place to vent while the days until we would bring them home went by incredibly slow, but after that I continued to post things about them, about me, about my mission to make my flat a home that will please not only me and my husband, but also the kittens. The floppy cats website and moderncat.net gave me great tips on this on-going journey.

The breeder would send us pictures of them and tell us how they were. My husband and I would hang onto every tiny bit of information about our babies. We could see during our visit that Elvis was more active and Einstein was more shy (or reserved, even? if you can say that about a tiny kitten), so their personalities were shining through since they were very young. They were around 8 weeks the first time (and only so far) we saw them. 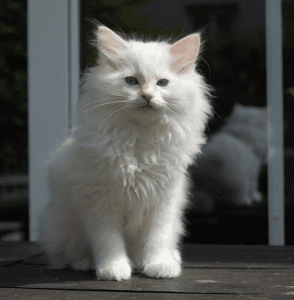 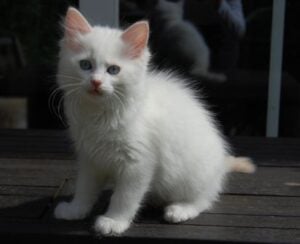 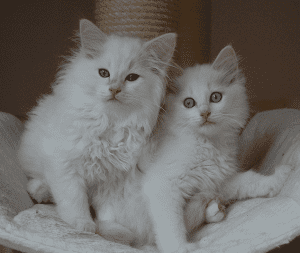 They got home and each day since has been a blessing, as corny as that sounds. My husband and I are really lucky to have them in our lives. They are beautiful, floppy, cuddly, follow us around, beg for scratches... they are simply much more than we could ever hope for. 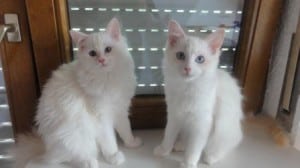 I just noticed that in all the pictures of them together that I submitted, Einstein is the one on the left and Elvis on the right. Coincidence?

It is funny to look at pictures of them while growing up and see the awkward times when they look thin, because they were growing as weeds, the times they were so small I could carry both of them with one arm... now they are big and have grown into their own skin.

Einstein used to be the furry one out of the two, now Elvis caught up.

One of the things I loved/love the most is to see their markings showing slowly, like a hidden secret, waiting to be discovered. 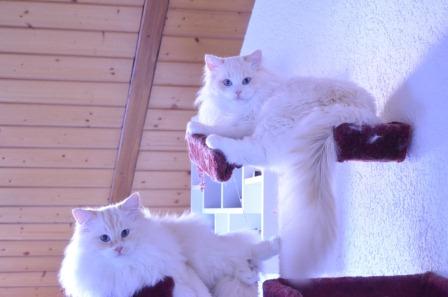 This picture was taken in december of 2012, they were around 9 months and a half in here, and yet, you can already see how much their markings have developed already. Einstein is the one on the left and Elvis is the one on the right (like on all the previous pictures I sent! I really had not noticed that pattern until putting all those pictures together, so forgive me for mentioning it twice! lol )

Elvis and Einstein really are more than pets to my husband and I, they are family. They are our kids, our first kids together, for that matter. We spoil them rotten, as much as we can, and they spoil us back in return, with love and happiness watching their antics. After our journey of long distance relationship, tears of being apart, our lives are just how they should be, our little family already started with our ragdoll twins.

I am happy to answer any questions you guys can have either here or on my blog. Thank you for the time you spent reading all that and thanks to Jenny here on floppy cats for this chance to show off my babies.