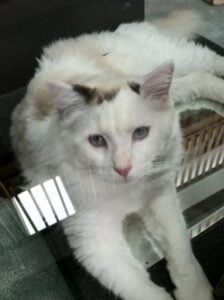 My name is Martha.  I love Ragdolls.  I have two bi-color Ragdolls but this story is about Whitie, my seal bi-color male.  Whitie is an “in-door” only cat.

I researched the temperament of various cat breeds and although had initially considered a Maine Coon, decided that the Ragdoll temperament would be more suitable for me – especially since Maine Coons are known not to like being alone without other companionship for more than 3 hours.  I looked into adopting but was unable to encounter any Ragdolls for adoption, younger or older.

I searched the internet for months until I discovered an impressive Ragdoll breeder's site from Long Island, N.Y..  I reside in the Bushkill area of the Pocono Mountains in Pennsylvania.  I was not excited about any of the breeder sites closer to where I reside nor in the states of New Jersey or Connecticut.  I recommend LuveleeDolls wholeheartedly as you not only get a quality kitten but one that has been well taken care of, socialized and treated as part of their own family. 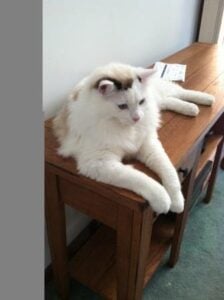 When I went for a visit to pick out my kitten I became charmed by a friendly older kitten moving about so I inquired as to who he was.  I was told that he was the kitten pictured on their website (he was about 6 months old and had not found a forever home at the time).  I had seen the kitten on the internet (he had a long slim face when he was younger) but wanted a younger kitten.  This kitten (called “Whitie” by the breeder) was so mellow.  I asked if I could take his photo (I was informed that they don’t usually name the kittens but since he had been there longer than usual, they had to call him something.  I practically fell out laughing when I was told that his name was “Whitie”).  When I opened my handbag to retrieve my camera, Whitie tried to place his paw into where I had unzipped my handbag – without extending his claws.  At this point I became more interested in the male kitten than in the female kitten born December 12th that I was there to claim.  Whitie was born on July 14, 2012; he was a year old this year.  I decided to keep the name “Whitie” as it seemed to fit him even though he is not as totally white in color as he had once been. 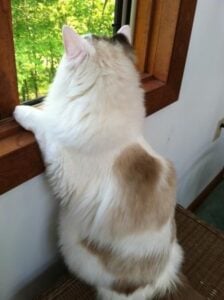 It was on my drive from Long Island back to Bushkill that I made up my mind that I wanted both kittens and contacted LuvleeDolls as soon as I arrived home.  They were delighted and were able to accommodate me by keeping both kittens until the younger one and I were ready so that they could leave together.  I could tell that the breeder genuinely cared about the feelings of Whitie because when I was there for that visit, she expressed verbally (and non-verbally) that Whitie had seen kittens come and go and still he remained.  She said that everyone else that had come to pick out kittens had had a similar reaction as me.  It is possible that others had not been in the same position to suddenly purchase two cats when they had been planning on one.  The funny thing is to hear myself say that I had actually “connected with a cat.”

Whitie weighed in at my vet slightly under 14 pounds a couple of months ago (I understand that he was the largest kitten of his litter). He is not overweight but has large muscles. 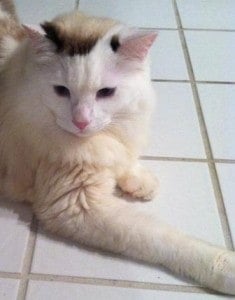 Whitie likes to sit close to me.  He is progressing to becoming a lap cat – though this has been accomplished gradually through training with treats.  Whitie gets his fur brushed daily and I also clip his claws myself.  Whitie likes to observe and play in running water, though that is not to say he likes being in water beyond getting his face wet.  Whitie has approached and walked around a bathtub of water, has stepped into a bathtub without water and I suspect that he will someday step into a bathtub with water.  Whitie also gets his teeth brushed 2 or 3 times weekly (Ragdolls are inclined toward gingivitis).  Whitie enjoys racing up and down two flights of stairs chasing his Ragdoll sister Khari (born December 12, 2012).  Whitie also fetches things and moves them up and down stairs and to other rooms as he desires.

I am in the process of training Whitie to wear a mesh, lightweight, small dog harness.  I would like to be able to eventually have Whitie walk out of his carrier when he has to go for a vet or grooming 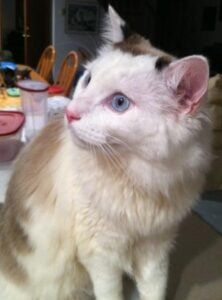 visit rather than my carrying him.  He has progressed to allowing himself to be placed in the harness and has been able to remain in it without being too uncomfortable for about 12 minutes, while being coaxed to walk forward with treats. I was able to get him to step out to a deck but after sniffing the air a few times, he turned to push the door to return to the inside.  That is a wonder because when I return home from work, Whitie is the first one at the front door and curious enough to try to take a step toward the outside.

Whitie basically gets fed grain-free foods.  He has been eating most recently the following dry foods: Merrick's Before the Grain Chicken, Fromm's Surf & Turf and Fromm's Four-Star Nutritionals Duck A La Veg), all of which contain fruits and vegetables. Certain of his dry foods contain pumpkin.  I think I can say that Whitie’s favorite is Fromm’s Surf & Turf.  I keep dry food out all the time as cats tend not to overeat as dogs do.  Whitie also drinks a good amount of water (probably due to his chasing around the house).  In addition to the dry foods, Whitie most recently gets the equivalent of about one 2.5 ounce pouch of Friskies Gravy Sensations food every other night. 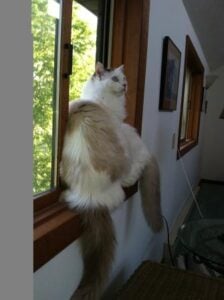 Whitie had gotten very picky about eating the more healthy grain-free choices of canned foods to the point that he refused to eat any more patés.  It had gotten to the point that when I was opening a can, Whitie would look at me and walk off as if to say, “I know that is not for me.”  I had noticed Friskies Gravy Sensations food pouches in a PriceChopper so decided to try those rather than waste any more money on the more expensive wet foods that I have had to give away and/or discard.

I use the 14-lb. bags of Swheat Scoop multi-cat litter.  There is absolutely no litter box odor with this brand of litter.  Swheat Scoop can be purchased in the PetSmart stores.  However, I use Chewy.com for the delivery of most of my cat supplies.  Chewy is very reliable and, in fact, their Customer Service is phenomenal. 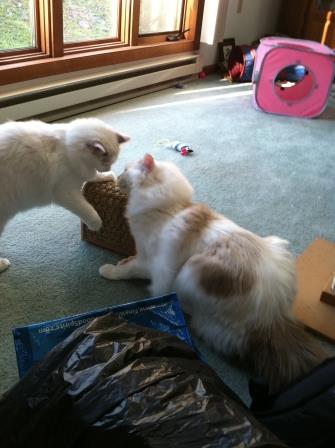