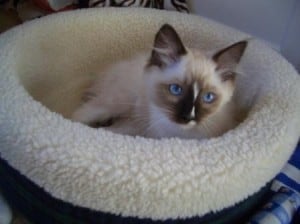 Murphy as a kitten

If you've ever owned a cat, let alone a kitten, you know how they can react to change. Consider this next time you're in a rush to bring home a new pet immediately after its been born. Changing homes can be extremely stressful on anyone, let alone a newborn kitten. While most people expect to be able to open up the newspaper, look to the classified ads, and find a six week old kitten up for adoption, this is often not realistic.

New cat owners sometimes fear that if they do not adopt their kitten early enough, it will not bond properly with them. This is not necessarily true. Stray cats that are several years old can form bonds with humans who take them in. It is understandable to want a small, young kitten, but it is harmful for a newborn cat to be away from its mother. Taking it away from its mother before it is at least 12 weeks old can cause quite a bit of psychological stress leading to developmental problems.

I am a firm believer that a kitten shouldn't go home before 12 weeks of age.  So when a reader asked me if I had read this article, "How old should a kitten be when it goes to a new home?", I thought it was time to address this on the site!

A Kitten's Immune System
Just like newborn babies, kittens are especially susceptible to germs and illness in general. This is particularly true between the ages of eight and twelve weeks when their immune system begins to rely more on vaccines rather than the mother's milk. During this time, kittens can more easily develop upper respiratory issue and sometimes experience diarrhea. They are already vulnerable to disease. If you move them into a new environment during this time, you're pushing their immune system to work even harder. In addition, mental stress can weaken the immune system. 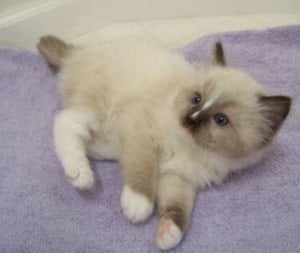 Charlie as a Ragdoll Kitten

It is at around six or seven weeks that most kittens receive the first series of shots. This can be dangerous, however, as some kittens are not healthy or large enough to handle the vaccinations. Administering the shots in a familiar setting, like the cat's home since birth, can help prevent behavioral problems in the future.

Weaning a New Ragdoll Cat
Naturally weaning the kitten off a mother's milk is a very important aspect of its development. It is meant to be a natural process usually occurring between eight and twelve weeks old. Eventually the mother stops nursing the kitten, and the kitten becomes more independent. If a kitten is taken from its mother before its been weaned off, the kitten may feel frustrated and insecure.

Socialization/Behavioral Problems with Rag Doll Kittens
While it can be cute when kittens are needy, this behavior is often unhealthy. Taking them away from their mother too soon can lead to separation anxiety and other nervous tendencies. Sucking and nibbling is usually a sign that a cat was weaned too quickly or not at all. Another significant fact is that cats learn how to properly interact with one another between ages nine and fourteen weeks old. How do they learn this? From their mothers. If you take a kitten from its mother too quickly, you can stifle its social skills.