My mom told me the other day that Parker, her new German Shepherd puppy, fell into the lake and their lake home.  I said to her, "Dogs aren't like the cats - they don't just know how to swim?"  She said, "Not really - they splash all over with their front paws...if you're in the water with them, they will figure it out."  But Parker had fallen off the dock into the water - so it wasn't a planned swimming event.

After high school, my parents moved into a house that had a pool.  So it was the first time I could see if Rags could swim - and then because of my parents' lake house, I also exposed Caymus, Murphy, Charlie and Trigg to the pool to make sure they knew how to swim.  The videos of them swimming, posted below - used to get some pretty nasty comments from people assuming I was forcing them to swim for my own entertainment.  But I was doing it because of what happened to Parker last weekend.

My parents no longer have a pool - so no more cat swimming, but it made me think to re-share this post and talk about cats swimming! 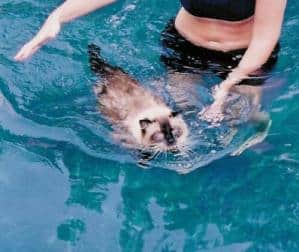 When I was in my early 20s, my parents moved into a house and put in a pool.  I had always been curious if Rags could swim like the dogs.  But I never had the opportunity to put him in anything - so I never tried it.  Until! my parents got a pool.

Rags was an awesome sport - he would try anything once - and sometimes twice if I asked him to!

When my mom got Murphy and Caymus - we decided to put them in the pool around 1 year old to see if they could swim too!  Sure enough - they swam - just like Rags! 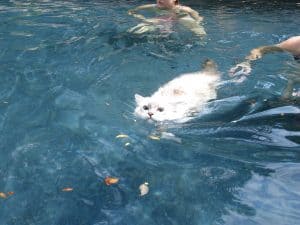 I knew I would give swimming a try with Charlie and Trigg too.  Charlie already went once, as you might have read  - but August 12, was Trigg's first swimming experience and he did a wonderful job!  If you follow us on Facebook, then you probably already saw the photos!

Charlie with My Parents German Shepherds

Does your Ragdoll cat swim?