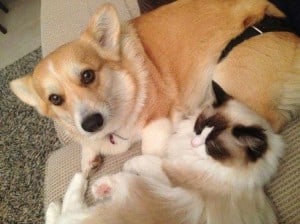 We got our two Ragdolls last October at age 13 weeks and 16.5 weeks (different litters, same breeder - the older one took a while to gain enough weight to be spayed so it actually worked out perfectly to get them at the same time). We got our corgi from her breeder 10 days later. So we went from having no furbabies for a few months to having three in just ten days! The corgi was 3 years old at the time and was retiring from the show ring and was planned to go back to the breeder next season to have a second litter. After two seasons with the timing not being right, the breeder decided to just let us keep her and she was spayed recently and ours for good. The corgi had never seen a cat before and the kitties had never seen a dog before.

When the corgi arrived, the kitties were still at the stage where they had a "safe room" (my husband's and my bedroom) for nighttimes and some of the daytime, so we used that to our advantage. We allowed the corgi to spend time in the rest of the house when the kitties were in the bedroom, then we would put the corgi in our (safely fenced) back yard while the kitties were exploring the house. This went on for some time, with them being able to smell each other and share the same space at different times. They could also see each other through the screen security door to the back yard. I would feed them on each side of this door each morning (at first, a fair way from the door, working up to directly beside it). I basically allowed them all to adjust to each other's smell and presence without 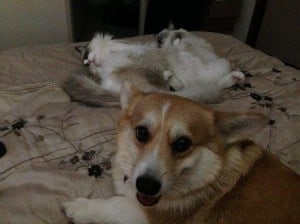 actually being able to touch. Within a week or so, the kitties were snuggled on one side of the screen door while the dog was on the other side. They even were touching noses through the screen – adorable!!

Next step was letting the dog in the house with the kitties "on the loose" from their safe room. I sat on the couch with her on her lead, just as a precaution, and allowed the kitties to come and say hello. They were so happy to be with her that they sat up on the couch back and kneaded with their paws, then got down on the couch and snuggled. I did this each night for a few nights with the lead, then started doing it without the lead, but keeping the dog just on the couch, and then when it was abundantly clear that all three would be great friends, we just let the corgi roam freely with the two Ragdoll kittens.

They love each other so much! I have a feeling the corgi thinks they are her puppies or something, because she will clean out the insides of their ears (eww!). All three will snuggle on my bed. The corgi does tend to want to snack on their poo, but I just keep the litter trays extra clean and that solves that issue (I know I could block them off and have seen the special door your parents have, but manage the way things are). Hope that helps! Kind regards, Gaye from Brisbane

Read on about Ragdoll Cats and Dogs.

Do you have a story about how to introduce Ragdoll cats to dogs or dogs to Ragdoll cats?  We'd love to hear it and share it on our website.  Please contact Floppycats with your story.