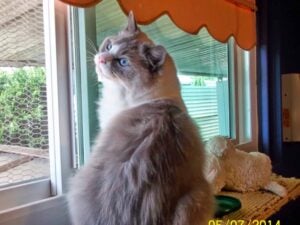 Floppycats reader, Evie, wrote in concerned about her Ragdoll Gracie.  She wrote:

"I've written you before about my Kitten Gracie. Well actually she turned a year old in March. I purchased the scaredy-cut scissors and the untangler, both which are great products and it was a little over than a month ago that I clipped some hair off her and I've noticed it hasn't grown back. It also looks thinner on her back right down the middle. Maybe I took more off than I thought, but I've been worried. The fur on her other part of her body is fine and thick like normal. Gracie's very healthy and happy, but I read that stress can cause hair loss. The only problem we have is this feral Calico cat. She started coming around some time in April and spraying and bothering Gracie through the sliding glass door. At first Gracie seemed to like her and would roll around all happy on the rug, ( I promised Gracie I'd get her a kitty friend) but Gracie soon realized that Calico cat doesn't want to be friends, so now I have to keep my sliding glass window shut; eventhough it is summer and I like having the door open with the screen door locked, but I've heard that diseases can be passed through cats that are hissing at each other. There is this constant fighting going on through the closed glass door. The first time it happened, I was shocked because I never heard Gracie growl before, but this Calico cat hisses and pounds on the door and Gracie always fights back. Recently My roommate said they were fighting through his screen door in his bedroom, which really scared me, because I don't know what diseases this Calico cat carries. Can FELV and FIV be transmitted by the saliva through hissing? and can this be the reason why Gracie's fur is kind of thin on her back, it's a bit thinner down the spine area? I can't ask Gracie's breeder, because she never responds to me and took so long to send me Gracie's blue slip. My roommate thinks I'm being paranoid about the fur on her back, so I figured I'd take her to the Vet if it doesn't grow back in another month. I don't know how to get rid of the Calico cat. when she see's me, she runs away. Now she's jumping on top of my shed which is directly under my bedroom window that has a long cat perch ( more like a bench) where Gracie usually hangs out.  Can you recommend some vitamins or supplements that are good for cats hair and skin and how I should deal with Calico cat. I live in Southern CA. So I like to keep my windows open in my bedroom.
Thanks Jenny for all your help.:) have you ever been in this situation?"

I replied, "I do not know the answers to many of your questions - other than, YES diseases in cats can be spread through hissing because of saliva being sprayed and then licked off."  Asking permission

"I got my Ragdoll Gracie last June 12, 2013 when she was 12 weeks old, and she turned a year old in March, but the contract I have with her breeder says not to have her vaccinated for FELV, FIV, or Rabies, so I didn't. Anyway my Gracie is an in-door only cat, but I live in CA. so I like having my windows open, and my sliding door open with the screen door locked, but since this Calico cat has been coming over here since April and picking fights with my Gracie through the glass door, I now keep it closed, but my roommate has a screen door that he keeps locked, but has the door opened for fresh air, and he told me that Calico cat and My Gracie were hissing and growing at each other through the screen door one morning. So I'm worried about whether Gracie can catch FELV or FIV through exchanges of saliva. I've heard that HIV is transferred through a bite. Gracie never goes outside and this stray Calico cat ( that's what I named her), never comes inside our house, but now Gracie is losing her hair on her back and I don't know if it's stress due to all the fighting ( even through the closed glass sliding door) with this stray cat or something else. Like I mentioned in my last letter was that I also purchased the Untangler Cat comb with the rotating metal rods last month before Gracie started losing her hair, so I wonder if that could have caused an allergy. Either way, I'm taking Gracie to see her Vet in a few days, but I wonder if any of your readers have had any reactions with the untangler comb. Thanks Jenny for all your help. Gracie and I appreciate it and we love your videos. Here's a photo of Gracie Last month before she lost her hair and her hair now. Please feel free to post the photos as well. Maybe some one else has had this problem with their Ragdoll." 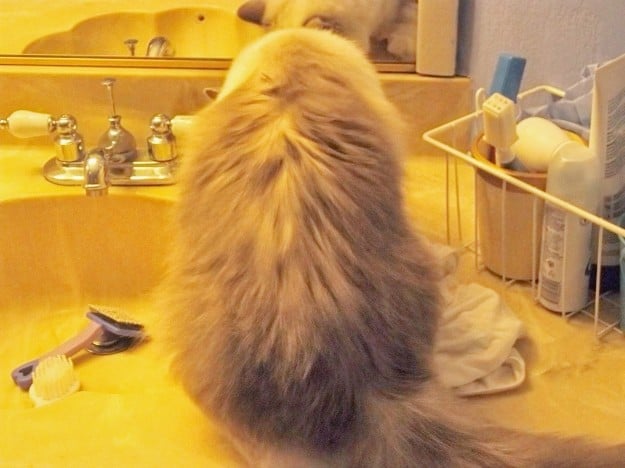 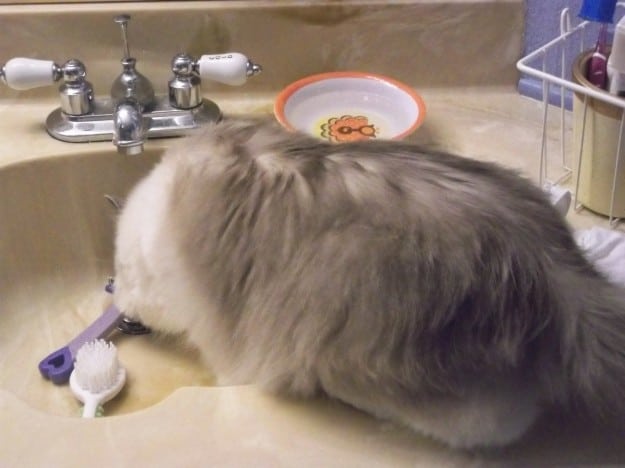