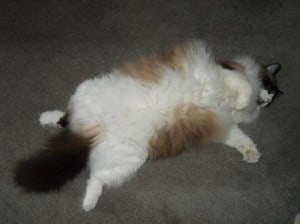 Originally published Jun 18, 2011 (I am re-running because I get a lot of inquiries about this)

Pat wrote me about her Ragdoll cat, Kitty Kitty, Baby Baby (Ragdoll of the week  November 1, 2010), who has a slight biting problem.  I offered to post it on the site, so that other readers might offer insight.  Please read below and offer suggestions for Pat:

"I have a wonderful female Ragdoll,  that I adopted 3 yrs ago.  She was actually about 2 yrs old when I adopted her.....she loves to be scratched around her neck/collar area, but doesn't like to be petted more than that and will quickly turn and try to bite me.  I'm use to her behaving like that, but I don't understand why she does it.  She loves to sleep stretched out on her back, but doesn't like her belly 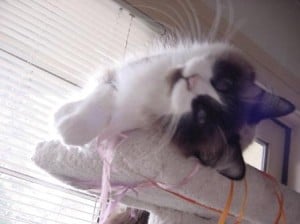 rubbed (which most Ragdoll's love).  I've wondered if other Ragdoll's do this?  Other than the biting, she follows me around like a puppy, jumps on my lap and stangers laps as well....she's very social, running to answer the door and is curious about anyone that visits.  I'm just concerned about the wanting to turn and bite?"
Pat

My reply, "I would think something from her previous experience causes her to bite."

Pat's reply, "I adopted her from Cathouse on the Kings, where she hung out with all kinds of kitty's. 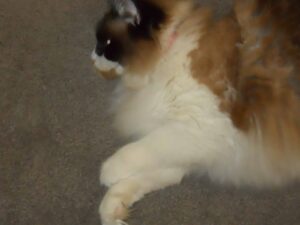 She is so very loving, but has that urge to whip her head around and bite, not a vicious bite, but a bite, none the less.  I believe you are right about a previous experience.  Sometime I wonder if she were injured on her tummy, so she's sensive there. "

Having problems with a Ragdoll kitten biting and being wild?  Check out this discussion on our Facebook page to learn more.

More recipes you may enjoy