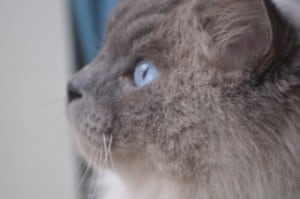 I rescued my mystery cat in early December 2012.  Nine months prior a neighbor had moved in and left her gorgeous cat out 24/7.  I'm very much a "to each their own" person but living in a condominium complex my other neighbors were beside themselves as the cat was pooping giant poops on their little green areas and there were constant rumors that he was biting and scratching people and dogs. 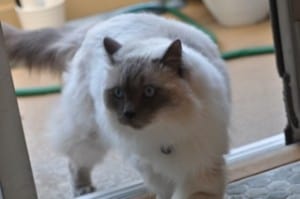 My only sightings of him were when I had my dog (Yoda, a 30# Corgi/Norwich terrier mix I adopted from a local city shelter in April 2009), and the cat would run away.  I should say here that I would not consider myself a "cat person". I've fostered about 16 dogs and 2 cats over the course of about 6 years.   I like them but no desire to have one permanently.

In the first week of December 2012 I came home from the mechanic sans dog and the gorgeous cat was outside per usual.  When I got out of my car 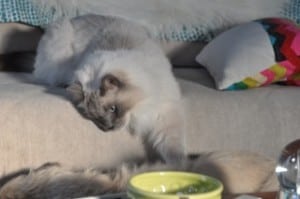 he was very loud and so I started talking to him and walking toward him. The cat came toward me slowly but without reservation and I reached down to pet the cat and was instantly alarmed.

He had horrific mats.  Some were so large that they cold have doubled as handles.  I then noticed that he had poop hanging off its bum and was a mess back there.  I went to another neighbor's house to have her look - she hated this cat because it was constantly leaving giant poos in her meticulously cared for garden. 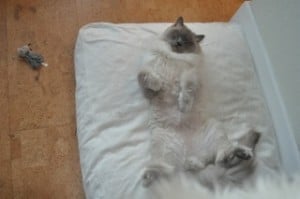 I forced her to touch it (she's allergic) and she was horrified as well.  I called another neighbor who was trying to do something about this cat as well (several had called Animal Control and a couple were going to catch it and take it to the shelter), and while the cat was bothering him he was also very concerned for the cat.

I went back outside and the cat was eating people's Poinsettia plants so I moved all my neighbor's plants (I'm sure they appreciated that!).  I called another neighbor who works at a Vet's office.  She explained to me, the cat ignorant person, that the cat's 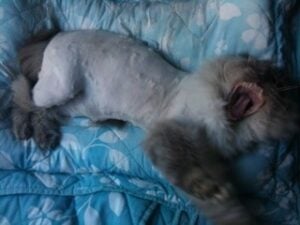 bum was a mess because it could not clean it because of the mats which were painful.  At this point, I was pissed.

We live in an area heavy with Coyotes (Hawks, Rattlesnakes, Bobcats, etc…), and in fact out complex is bordered by (no fencing - all open space), a nature preserve where these animals, and more, live.  As winter sets in the bunny population is decimated and outdoor cats go missing every couple of days and blood is on the asphalt and concrete throughout the complex.  She told me that a cat that had that severe of matting would not stand a chance against a Coyote. 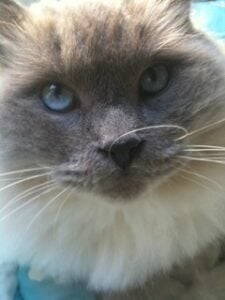 The neighbor who owned the cat was home so I went and knocked on the door.  They refused to answer so I left.  I took some pictures of the cat and put a flyer up asking if anyone knew who the cat belonged to (even though we knew who it belonged to), suggesting that whomever owned the cat was out of town and paying someone to care for it and didn't know that the cat was being neglected.  Hoping that would not be embarrassing to them (they could claim that they had been out of town and unaware of his condition) and bring him inside and care for him.

The next day, my neighbor who worked at the Vet had said that if I caught the cat the Vet would look at it for free and tell me if I was overreacting or not.  If the cat was in bad shape they would fix it up (for free - that Vet is a whole other wonderful story!),

and I could take it home and see how it would do with the dog and, not being a cat person, if it worked for me.  If not, they would happily take it and find it a good home.  She advised me to get some canned tuna as a lure.

The canned salmon was cheaper so that's what I got!  When I got home at 8pm that night, there was the cat again.  I got the borrowed crate out and put the salmon in the back of it and made a trail with it.  The cat Hansel & Greteled it right into the crate! 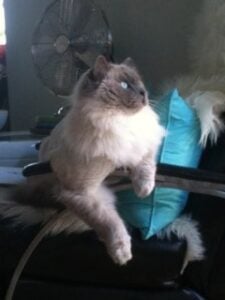 I set up a huge dog crate with a litter box, water, food and a bed for it.  He spent the next 12-hours meowing!  It was so loud I was certain that someone would hear him.  The next morning I dropped the cat off at the vet and anxiously awaited their verdict and hoping that it was okay.

They called and said "it's a boy!".  His mats were so bad that they needed to anesthetize him to deal with them and clean up his back end.  They said he seemed in good condition, he had been neutered and that he was VERY loud!  The Vet's determination was "abuse due to severe neglect" and they saved some of the mats for me in case I needed them as proof of anything in the future.

Their guess was that he was a Blue Point Doll Face Himalayan but they also suggested he might be a Ragdoll or a cross of the two.  I went with Himalayan. 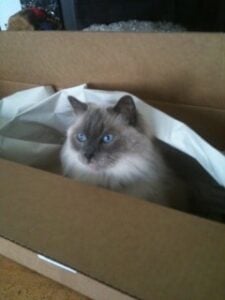 He and Yoda were fine from the first second and I fell in love with him immediately.  Truth be told, I knew I loved him while he was at the vet and I couldn't stop thinking about him (if I could just find a nice burly man to think about that way!).

I agonized over whether or not I should give him back.  I reached out to so many people (even strangers) and did my best to tell the story fairly.  The overwhelming majority said to keep him.  Two people that I respect very much felt that I should give him back.  Another two people said that it would be a valid choice but that the likelihood that he would survive with the Coyotes was nearly nil and that he certainly would end up in the same condition again.

It took me about two weeks and I finally decided that I was not going to give him back so then I had to come up with a name for him.  I had a list of ideas and suggestions of about 20 names but nothing sounded right to me.  After about 4 weeks I finally came up with Prossimo.  I used Google Translate to come up with this Italian word for Neighbor.  I felt it was fitting since he came from a neighbor and also to honor the many neighbors who helped in the rescue/escapade!

I felt it was fitting since he came from a neighbor and also to honor the many neighbors who helped in the rescue/escapade!

He has not matted at all since I got him even though he hates to be brushed.  I think he matted so badly previously because he was out in the rain so much.

His paws are gigantic!  He was 15 pounds when I got him and how he's 16.5 pounds.    This is what made me start doing more research into his breed.  A Himalayan should not be this big and without grooming, his fur should be matted.

When I come home about 60% of the time he's downstairs at the door and when people come over he goes and greets them.  He definitely flops down and rolls over (it's so unusual that I noticed it as different but I thought he was just weird until I started reading your site!), he spends a lot of time on his back splayed 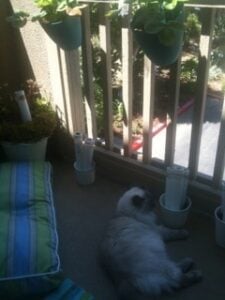 His back legs seem short and stocky to me and he's not much of a jumper.

Anyway, I'm wondering what you think - do you think he's a Ragdoll or Ragdoll mix?

He eats a whole prey raw diet, is fairly mellow except when he is hitting, biting or humping the dog!  Yes, humping.  Yoda is so mellow that she either just ignores him or goes and hides.  Prossimo definitely rules the roost.  When we come back after a walk he's generally downstairs waiting for her (1/2 the time he's meowing at the door so loudly I can hear him down the street!), he sniffs Yoda, rubs up against her, chirps at her and follows her up the stairs. 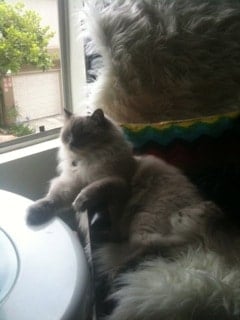 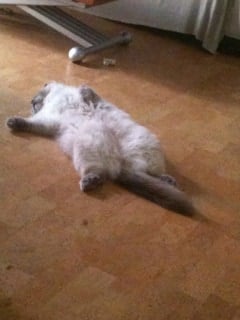