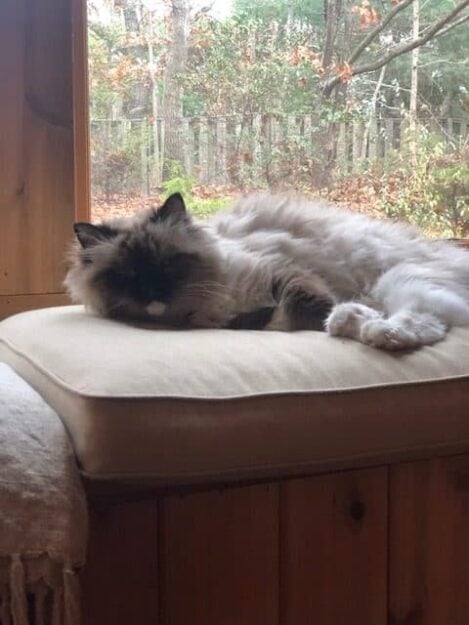 You can see him waiting for seaweed on top of the container. My housekeeper left seaweed she bought, and gobbled it down 15 years ago. 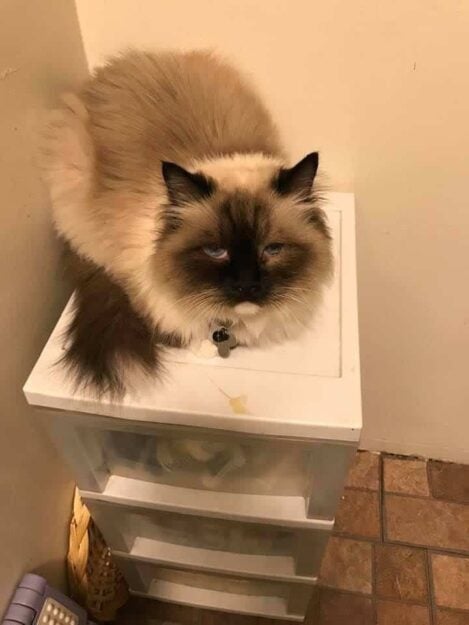 He is demanding, a character and loves me to death. He has two houses- one in  Manhattan (apartment) and Southampton and hates Southampton house. In the house he sits next to me watching TV on the arm of the chaise, has his own bedroom, Tiger Lilly my other cat sleeps upstairs. Back and forth, every week and doesn't make a sound in his case.  When we get close to the house in Hamptons he starts trying to get out of the case.

I buy the Seaweed in Fairway. He drinks Oat Milk too. Spoiled? Yes 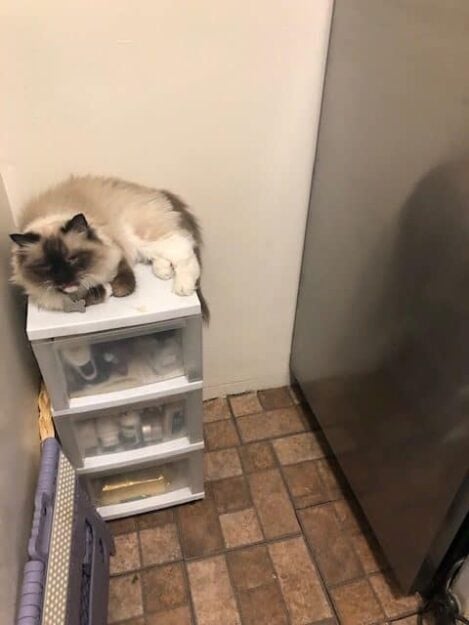 He has control over the whole house and his sister Tiger Lilly a Persian Tabby.
He can’t be groomed any more. He’s angry when the groomer gets near hi .
A funny story he chased my daughter (doglike ) around the room when she found him outside.

He’s demanding and loving at the same time. A character yes!

I named him Prince because I had a cat Princeton another floppy cat who died from FIP at 6 months; had to wait another six months before I got Princey. I got him from a breeder online called Fancy Cats. 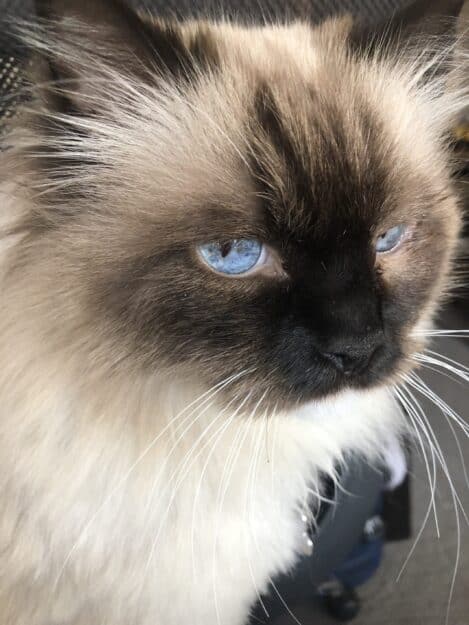 When he was a kitten he hid between the steam pipes in my apt. I chased him out; he got mad hid behind the refrigerator, I fell and hurt my lower back. He was scared and I got hurt. Then he made in the bed. These things make him a character.

Other memories. I'd fly to Florida every other week and took him. He ate my boyfriend’s couch. Bad Boy!

Lover boy? Yes. He purrs so loud I can ho deaf.

They play periodically, but only sometimes. Very independent, indeed.

He’s difficult but loving at the same time

Incidents like hiding under the stairs behind the dryer makes me crazy. I can’t get to him. It’s a tight space.

I put a lock on the door and he opens it. Not easy! Even if he doesn't go in the alcove, he will open the lock and then open the door. Just so I should worry that he’s behind their and can get stuck. 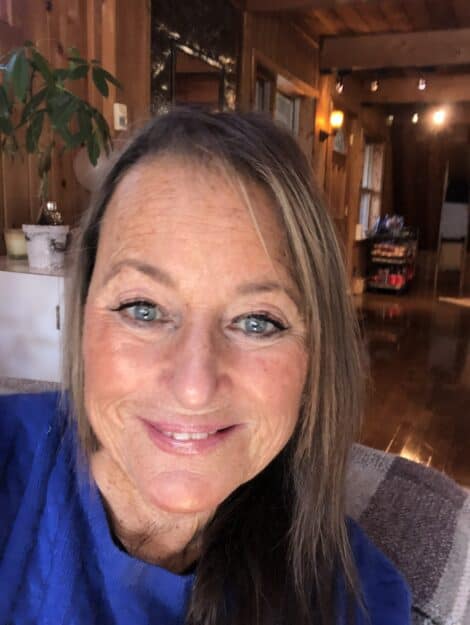 He understands the spelling of seaweed. If I spell it out, he tuns to the refrigerator.
Looks at me with those big blue eyes. 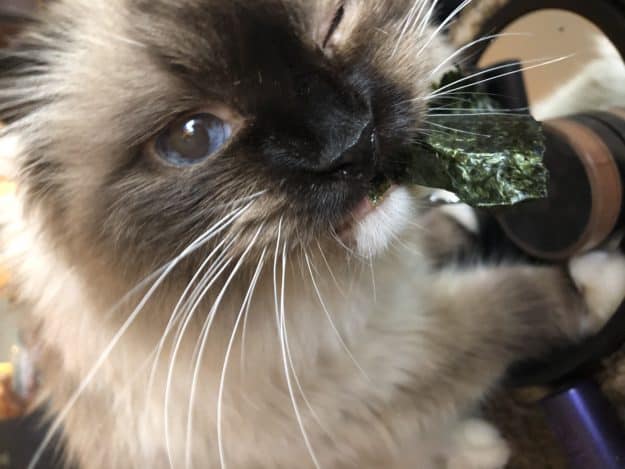 They say animals with blue eyes go blind. Princey is 19, we should look as good as at his age. 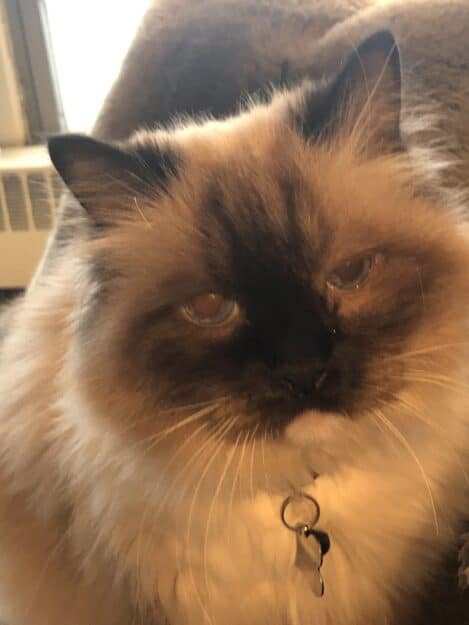 Princey was never ill and has the same strong personality as he did as a kitten !!!!

One day I packed the car to come back to Manhattan, and Princey started screaming. He never screams; I turned around and I forgot Tiger Lilly; so, I turned the car back around and picked Tiger Lilly. These things make Princey seem human.

Loving, crazy and endearing is what Princey is made up of. He throws his big mitten paws around me. He takes cat walks in the hallway of my apartment. I tell him to come back and he never listens. I'll close the apartment door and he comes back and scratches on it.

A strong seaweed lover (an addict). A good friend and quite a character. The longest relationship I have had with a male. My cat Hampton lived to 18 years old.
My relationship with my husband lasted 13 years. My boyfriends don't last very long. 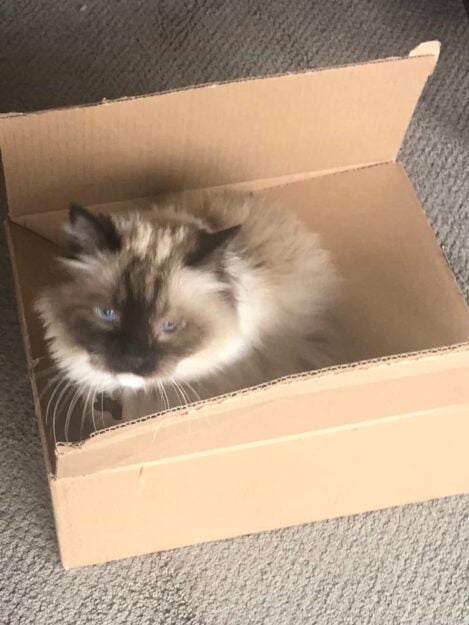 I’m in the dental field and clean animals’ teeth as well. He has strongest teeth I have ever seen. I am a dental hygienist (known as the Tooth Fairy.) I don’t even have to clean his teeth. (Self-cleansing teeth).  My website Sandrasenzon.com

So he’s quite a character and his name Prince fits his personality!

I think animals are more communicative than people. We read right into their souls. They don't need language, cell phones or computers. They are understood and read into humans better than humans read into each other.

My Princey is not only communicative but he psychic. He’s aware of when i might be leaving one house to go to the other house. He may hide because that is a cat’s instinct, not to want to travel. If I leave him, he gets very upset so I ignore his instinct to hide.