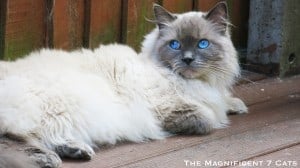 I adore ragdolls. I found my first, Prince, in 2007. He’s a big boy and pretty much rules the roost at the M7 House (although I’m not sure that Rocky, my British Blue / Turkish Van cross would agree). Prince is everything a raggy should be: loving, docile, floppy, slightly aloof and rather self-assured; like he knows where his next treat is coming from.

Prince was soon joined by Chocolate, a seal-point with the most piercing blue eyes imaginable. His sweet and loving nature combined with his loyalty and a deep and knowing wisdom made him a very special boy. I lost Chocolate in 2011. He’d been missing for a few days after escaping from the house when a local shop-owner broke the news to my fiancée, Steven, that he’d been involved in a road accident and died at the scene. I was inconsolable; I felt like the world was collapsing around me. There would never be another boy like Chocolate. 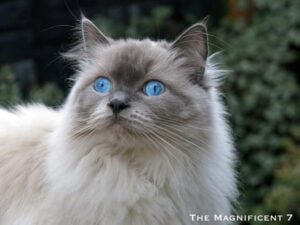 Some months later I was tentatively browsing the ‘Pets for Homes’ website, swooning at the all the gorgeous ragdoll cats waiting for homes when a particularly cute photo caught my eye: a stunning litter of ragdolls for sale with a breeder in Kent – about an hour’s drive from my home in London. We made an appointment to meet them at the weekend.

And there she was. Only eight weeks old and already doing her own thing, standing out from the crowd. She jumped down from the bed upon which the breeder had carefully laid the litter and ran over to a scratch post on the other side of the room. She was like a performing chimp: Pick me! Pick me! She wouldn’t even keep still long enough for Steven to take her picture. It was love at first sight.

Princess Pee-Pee (Pixie) Persephone came into the world on Valentine’s Day 2011. One of a litter of 6, she’s a blue-point ragdoll with mesmeric blue eyes, perfect whiskers and immaculate ear tufts. From being tiny she’s been obsessed with grooming herself – she always looks immaculate. 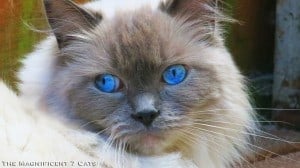 Pixie is pretty small, even for a female ragdoll. She has a tiny, heart-shaped face and a very slinky body. She has a floppiness, typical of all ragdolls, although she’s not at all fond of being picked up – not by me, anyway. She’s far too grand to be cuddled. She’s a princess and there are standards to uphold!

Pixie is the only girl among my 7 cats and doesn’t she know it! She’s a girly-girl, too. She doesn’t walk, she trots like she’s wearing high heels. She’ll take a few quick steps and then stop, have a quick groom and then trot along some more with her nose in the air. Petite and feminine she may be, but don’t be fooled. Pixie can hold her own against her (much bigger) brothers. She likes nothing more than to bait the other cats and if they’re really unlucky they’ll get a swipe around the head. Pixie has a mean left-hook, so much so that one of her nick-names on the M7 Facebook page is ‘Thuggy’. 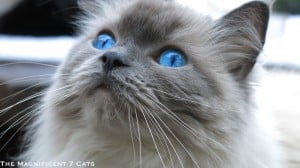 Pixie is something of an escape artist. She’ll sit in my back yard gazing wistfully up at the fence dreaming of the day when Steven will remove the netting he was forced to fit after her second escape into our next-door neighbour’s garden. She had no intention of returning home, either. I had to collect her. She was sat defiantly in a pile of leaves and twigs with her perfect fur covered in slugs and spiders. She loved it. What a Tom-boy!

I think Pixie would miss her home and brothers if she left. So for now I think the net – and Pixie – can stay exactly where they are.

Pixie lives with Prince, a Ragdoll Cat featured as Ragdoll of the Week, September 22, 2014. 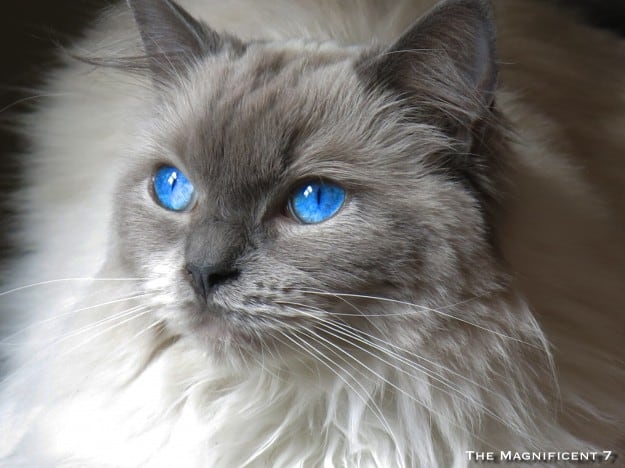 15 thoughts on “Princess Persephone (Princess Pixie) – Ragdoll of the Week”