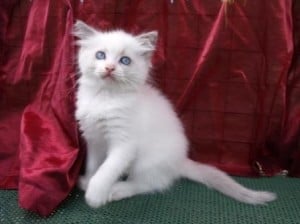 Poppy at a kitten

I went to some cat shows a few years ago, as I was keen to get into showing and breeding, when I was introduced to the Ragdoll breed I was smitten. I had previously decided that I wanted to specialise in a short haired breed, as I have a pet Persian and an Exotic who both have high maintenance coats, but when I found out how low maintenance the Ragdoll’s coat was, that was the clincher. I have arthritis in my hands and didn’t think I would be able to deal with another longhaired breed, especially when they would need show grooming on a regular basis. I was over the moon when I discovered these beautiful looking cats were so easy to look after. 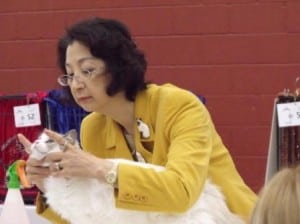 Poppy at a cat show

Poppy is from our own prefix Hugalicious Ragdolls and we pride ourselves on breeding kittens of quality and not quantity. Poppy is a champion show cat.

Poppy is a kitten that we kept from our very first litter to show and eventually to be a breeding queen. I am a registered breeder, and show my cats, and Poppy had great qualities that we recognised from when she was very little.

Poppy is currently 16 months old, her birthday is November 20th 2011. She is a Sagittarius, although she doesn’t show the 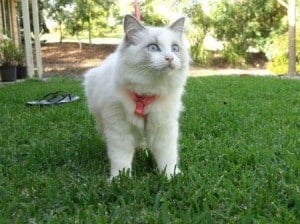 traits that a Sagittarius cat is supposed to – “This is a roaming fool in the cat world.” Poppy is very laid back and happy to lay flat out on her back waiting for tummy rubs, has no interest in roaming and would take great offence at being called a fool!

Poppy loves to play fetch, her favourite toy is a rattly mouse which smells of catnip. She and most of the Raggies we have had, learn to play fetch really easily. You should try it with your Raggie. Poppy definitely does not enjoy her baths. I restrict bathing for show preparation only. Although she meows and carries on like a baby, she isn’t 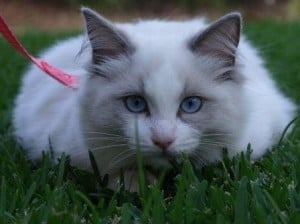 too difficult to handle, even though she is quite a big girl. I think Poppy would agree that the effort is all worth it in the end, as she scrubs up very well, and the smell of a freshly bathed and dried cat is divine.

She was such a cute little poppet, the name Poppy suited her well from the start. Her pedigree name is Hugalicious Blue Bayou, after the wonderful Roy Orbison song.

Here is a video of Poppy walking on her lead in our garden. She loves to feel the grass under her feet, but is only allowed outside when on her leash. 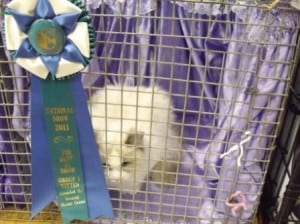