I am so glad to hear that Floppycats is not just for owners of purebred Ragdoll cats. I live in Cornwall in S.W. England, UK. My own floppy cat Poppy is not purebred but has so many rag doll characteristics that I feel she must have a high percentage of rag doll in her genes. She is black and white with yellow eyes. We bought her from a lady who had seen her on Facebook the week before, bought her from the owner and now had decided not to keep her. That was where we came in. After the death of my beloved black and white cat Sophie at the age of nearly 22, I was so sad and although another cat could never replace her, I was desperate to find another black and white female. They seemed to me to be always so sweet natured as Sophie had been. There seemed to be a complete lack of black and white females even in rescue centres so I settled on a dear little tabby and white kitten who I called Tabitha (Tabsy for short). We grew to love her so much. Two months later my granddaughter Beth saw Poppy 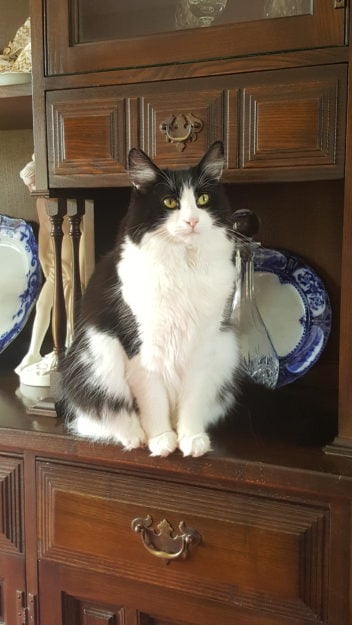 advertised and we fell in love with her at once and brought her home aged 9 weeks. She had been born on 7th November 2015. Now we had two beautiful kittens! 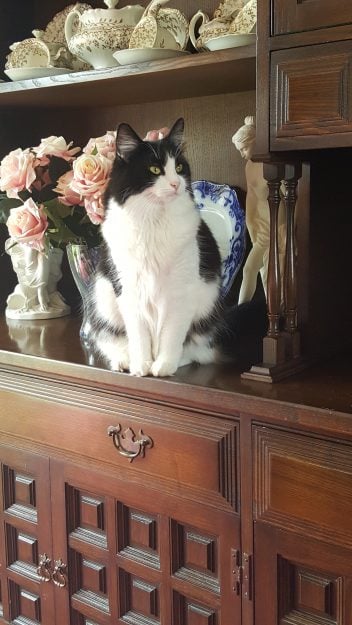 The first time I realised Poppy was no ordinary kitten was at about 4 months old. She had always had soft fur like a rabbits but now she had long white hair growing between her toes and from her ears. And she began to grow…..Her fur grew long and fluffy and so soft…. Within a short time she grew to twice the size of our other kitten although she was two months younger. Her tail grew so beautifully long and some of the hairs were 4” long all over the tail. She had a rather odd (to me) characteristic in that she would just flop down wherever she fancied even right under our feet. She seemed to have no thought of danger or being stepped on. I was a little worried about her - I had never had a cat like this before, but was reassured by a knowledgeable neighbour who told me she was part Rag doll. 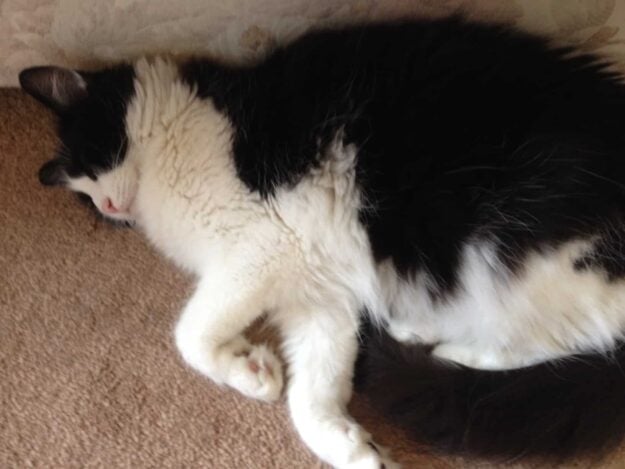 I was fascinated and read all I could about this breed to understand Poppy better and her needs. My neighbour warned me that she would probably not be safe to wander free as most English cats do. The lack of a sense of danger would make her too vulnerable, so we had the garden enclosed by Protectapet, a firm we found online. As Tabsy was also vulnerable as she suffered from hip displasia and had had an operation on the head of the femur, we felt this bought us peace of mind with both cats and would keep them safe away from roads and other dangers. Poppy is now 20 months old and so beautiful. We love her dearly. She loves to play with water from her dish, in the garden and especially in the bathroom. 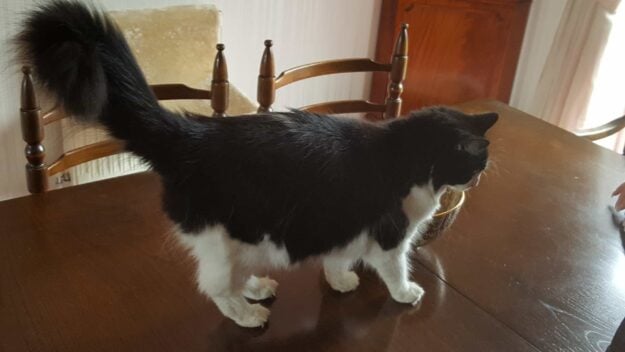 She is my bathroom attendant every time she senses I am going to the bathroom to clean my teeth or have a shower! She loves me to leave the tap running slightly so she can play with the water and eventually she will curl up in the washbasin and has to be lifted out of it so I can use it! The first time she saw me take a shower she frantically pummeled the glass with her paws as if to say,”come out, come out, you’re getting wet!” Now she accepts this as just one of those strange things her crazy owner does and curls up on the bathmat until I come out. I think I must get her one of those fountains you tested on Charlie and Trigg. She would just love that! She is not yet a lap cat. She will get on my lap and stay for 1 minute than jump off again. She is not keen on being picked up either. She launches with her feet like one of your does to get away. Can be quite painful. Hoping she will grow into these things as she gets older. 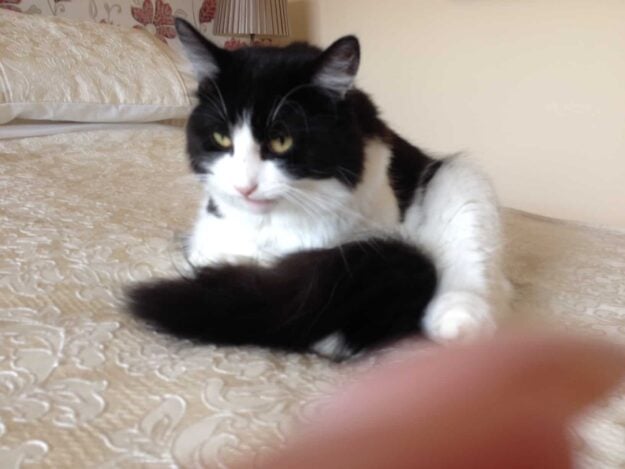 Thank you for Floppycats. Your videos have taught me so much and I have fallen in love with Charlie and Trigg. Not sure what state you live in but my son and his family, also cat lovers, live in Maryland. Enclosed are some photos. I am not the best with technology so I hope they all get to you.