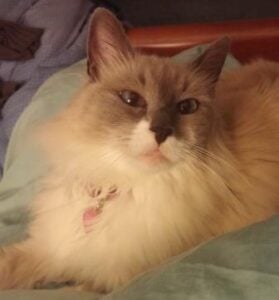 I got Pitty from a breeder, whom was my neighbor's ex wife. At the time my neighbor's wife was showing me the website of his ex's Ragdolls and said she was having a hard time selling them in Idaho; where she lived at the time but are now back in Tennessee where we all are from and reside. People in Idaho wasn't as familiar with the breed and didn't like the Blue Point colors and preferred the chocolate color point Ragdolls. 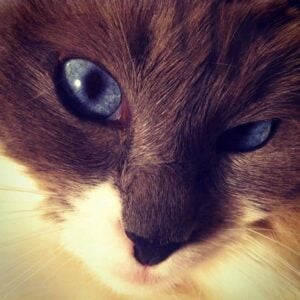 So, I wanted a kitty that was a snuggler and my neighbor said these cats are awesome and they love to just lay in your arms why they call them Ragdolls. So, I told my neighbor's current wife to tell his daughter to pick me out the sweetest kitten out of the litter and the funny thing is when I saw the pics of all the kittens Pitty's pick jumped out at me like she's my favorite in the way she looked but I thought if it's not her then that's ok and then she was the one his daughter picked out and they flew her in from Idaho gave her a bath I remember it was grape scented shampoo. She was 6 months old. Well, I couldn't recommend her as a breeder anymore because she has quit her cattery and has only one of the original Queens left and she's been fixed because she almost died from having her last litter and she's not the mother of Pitty.

This story is how through my neighbor's current wife telling me about the Ragdoll's did I get interested in them an the first time I've heard about them. Pitty was born Nov. 2007 and I have to look at her papers I can't remember the date. I've had her since she was 6 months old so 99% of her life. She turned 9 on November 7, 2016. 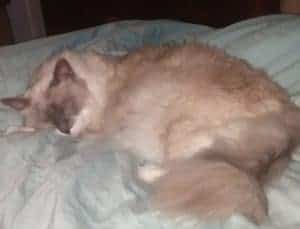 She likes to ride in the car I've always taken her with me in the car she's so laid back but she doesn't like getting out into strange places she does good but it makes her nervous. She loves to play and her favorite toy is a soft chew toy in shape of a bone but it's all cotton and stuffing. She loves to bat that thing around and carry it in her mouth and she does that with other toys too. I'll find it and other toys in different locations throughout the house. She needs a lot of affection when we go to Europe for 3 weeks, my husband is German, my mother gives her a lot of affection and when we come back she is all over us purring, meowing, wanting to be loved. She loves the guest bed room because we normally keep it closed so if I go in there she loves to run into the guest room and we amuse her let her stay. She's a very dainty eater and polite and she follows me around like a dog. She sleeps with us sometimes and sometimes not whatever her moods are. She loves chicken so if I'm eating some I'll give her a bite. She loves going outside and when I'm here I'll let her out a little bit but I never leave my house without bringing her back in so she's monitored when she's outdoors. She loves to sniff the outdoor air. She's even good getting baths. 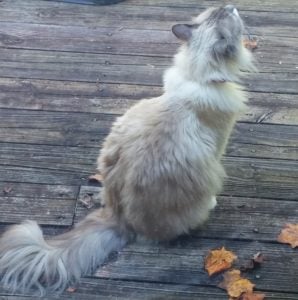 The only thing she HATES next to our male cat is the vacuum cleaner she runs out like a bat from hell after her and runs and hides till I'm done vacuuming even when she sees us pull it out of the closet she high tails it out of there lol poor little girl. She doesn't have a youtube video. I'm too lazy to put one up I don't film her much but I take pics all the time. I got her name because I wanted to give her a real Southern belle sounding name and I love Gone With the Wind and there was a aunt in law of Scarlett O'Hara named Miss Pittypat Hamilton she was a old spinster with a ridiculous curls and she was always threatening to faint calling for her smelling salts and she was hysterical in that movie "Yankees in Atlanta!" That's how I chose her name cause of that hilarious character in GWTW.

I recommend a cat tree because if you have a multiple cat household and she'd get harassed by my male cat some it provided her with a escape oasis in her top bed on that thing and my male cat he is a ground dweller. So, a perch they can sleep and feel safe. I think laser pointers are fun toy for cats and they are cheap and you can never have too many scratching posts cause Pitty likes to scratch furniture till I got more scratching posts and she's been leaving the furniture alone. She can eat about anything but too much wet food makes her Gob Gob soft. So, I wouldn't over kill on the wet food and they tend to have runny eyes just a little bit not like a poodle and daily I check her eyes for corner eye boogers. Other than that she's a healthy little critter. She's 11 pounds and that's the range she's stayed at. 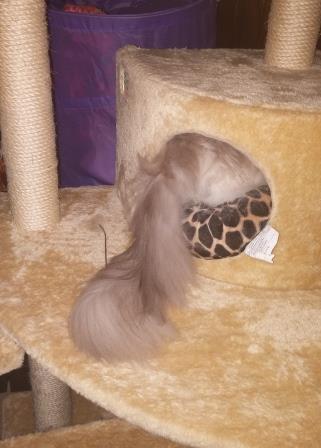 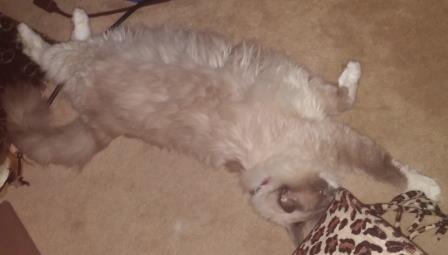 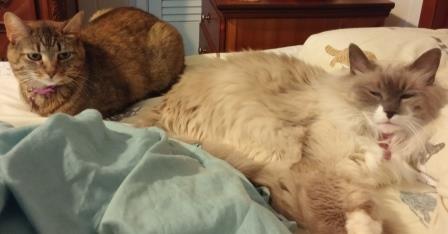