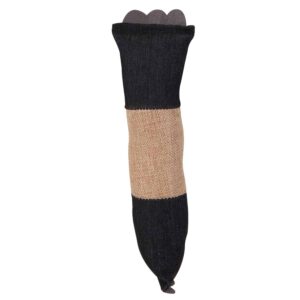 The Petmate Jackson Galaxy Denim and Sisal Twisted Kicker Toy is made of denim and sisal – denim with a sisal center band with two catnip pods – one on each end of the kicker.  It measures 11 x 4 x 2 inches and weighs 2.4 ounces.  It is a nice size for Ragdoll cats or large breed cats – as it fits nicely with the length of their bellies.

The cats immediately knew what to do with this cat kicker toy – we’ve had kicker toys in the past (KONG) and they haven’t been as interested.  Trigg has shown more interest in it than Charlie, but Charlie has shown more interest in it than I thought he’d have.  In the review video below, I mention how this kicker toy is one of the harder toys to review because the cats seem to play with it when I am not around.  And I know this because I find it in different spots in the house – like in Trigg’s Neko Nappers Pet House.  And it also has cat hair on it, which means they’ve been playing with it.

You’ll also notice in the review video below that the sisal portion of the product is coming apart.  This is not a problem with my cats because they don’t try to eat things they shouldn’t – but if this toy was in my parents’ house, it would need to be repaired or put away because my mom’s Murphy would tear at it until it came apart.  It also comes in a plush variety, so that might be a better one to try, if you want to try it out because it is one fabric.

Perhaps a way to avoid the sisal fraying is not to leave it out for the cats to play with and only allow supervised play.  Of course, you could always repair it if you know how to sew…but I do not know how!

You can buy the Petmate Jackson Galaxy Denim and Sisal Twisted Kicker Toy on Amazon for $7.99.

Here is our arrival video of all the Petmate Jackson Galaxy Collection cat toys:

We asked Petmate to make a $200 product equivalent donation to the non-for-profit organization, Kitty City NM, in exchange for the review of their Jackson Galaxy collection products. We received the Petmate Jackson Galaxy Denim and Sisal Twisted Kicker Toy for review from the manufacturer. Receiving the free product and Petmate’s donation to Kitty City NM did not influence this post.