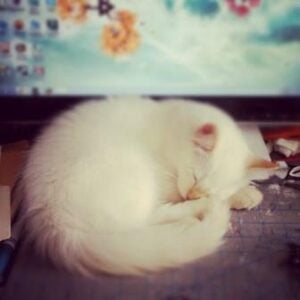 Day One of living with Ollie

Finding Ollivander (Ollie) was an adventure in itself. I always knew I wanted a second cat after my Juno (Maine Coon mix) lost her roommate after college. I searched shelters upon shelters, never finding the one (mostly because Juno hated all of them.) Finally I gave it one last try and reached out to a breeder. I had never gone through a breeder, but I read a lot about what to look for.

I decided to try for my dream cat: A flame blue eyed Ragdoll. In a way I guess I kind of rescued Ollie in the end. He was originally chosen by a family, but when they finally met him they bought his sister instead. The breeder dropped his price in hopes to find him a home while he was still young. Upon meeting him, I knew he was the one I had been searching for. 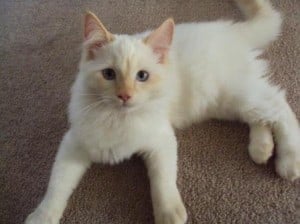 After his first vet visit in which all the techs swooned over him.

When I tried to name him, I knew I wanted something around the lines of Oliver, but he needed something as royal as his mane. As a lover of Harry Potter Ollivander was a natural fit. His full name is Ollivander November September, but we call him Ollie for short.  He was four months old and the silliest little man I had ever met. He cried all night and all day until finally when I couldn’t take it anymore, I opened the door to let him meet Juno. 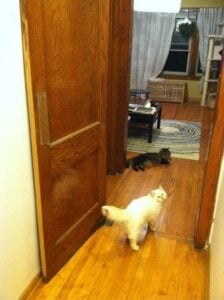 This is the swinging butler door I mention for Ollie's poor life decision on that fateful day.

At first she was confused. WHAT IS THIS, WHAT DO I-, HEY GET OFF THAT. Then she was mere annoyed. But finally, after a day of him romping around playing, she accepted him and groomed his little face. Talk about happy ending for everyone.  Ollie will be turning two in June 2014. He is quite internet famous with my friends and family, but not for the reasons he should be. I like to compare him to Joey on Friends, all looks no brains. He even has his own hastag: #folliesofollie.  In the span of a month he visited the vet five times. I had noticed a lot of vomit around the house. A lot more than usual hair balls. That was visit one, but the medication they sent home didn’t work, and he was brought back immediately the next evening. After six x-rays and an overnight stay in the hospital that was hard for all of us, it was finally determined: He had swallowed a litter pellet accidentally as he is always seen chasing them around the house. 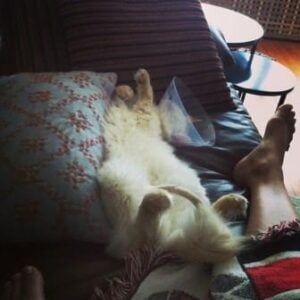 All looks, no brains.

Back home and healthy he was back at the emergency vet two weeks later. Ollie loves to play. A LOT. He had pushed all his toys behind my swinging butler door one morning and with his bottom facing the corner of the door, he bumped it closed. Right onto his poor tail. I rushed him to the e-vet where his tail was shaved and he received six stitches. See what I mean? Follies of Ollie. Regardless of his follies, everyone loves Ollie and Ollie loves everything. I would recommend food, toys, beds, and more, but Ollie literally loves everything. So in his words I think his recommendation would be: “I LOVE ALL THE THINGS.”  And we love him for it. 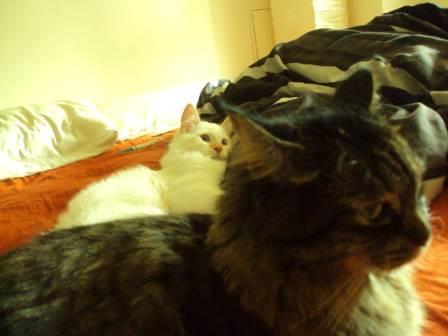 Day Two with Ollie. Juno is still in her annoyed phase. 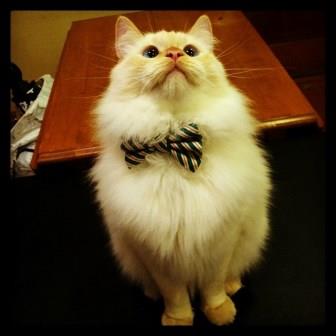 Regardless, he's quite the dapper gentleman.