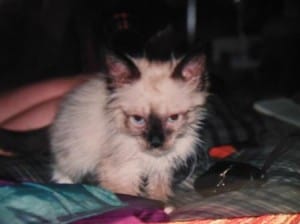 I wish to share my love of a Ragdoll with all - my own Ollie.  I had found Ollie in the year 2000 when I had resided in the San Francisco Bay area.  I had lived in the second level apartment above a woman that had more than one child and fortunately, in my case, each of her children came home with a kitten from the Vallejo Farmers Market. As you can guess, the mother had to find a new home for all of these kittens that were brought home.   I stepped in to take a peak and I saw Ollie asleep on top of a dryer. Ollie was infested with fleas but I had to have him, so the first thing I did was give this little guy a bath.  As you can see from his first photo, he was not too happy about this. I took him to the vet and she fixed 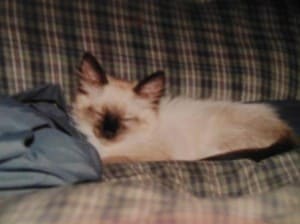 him up in no time - he also feel asleep in her arms when she was giving me some background on Ragdolls - - so adorable.  Nevertheless, I grew to fall in love with this little guy and named him Ollie. There is no particular reason for his name selection though at times, my niece used to call him the Ollie Llama.  Ollie is my first male cat and what a treat - he is laid back, affectionate, and quite lovable.  Having done research and talking with the vet, it was a strong possibility that Ollie was indeed a Ragdoll given his characteristics.  He was 1.8 pounds when I got him and averages about 15 pounds his entire adult life.  Given the math, Ollie is about 13 years old and I have had him almost his entire 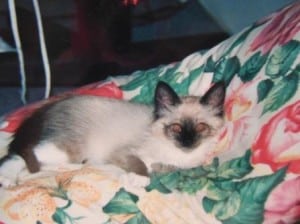 existence, thankfully.  I have relocated with Ollie from California, to Georgia, and now in Pennsylvania. Although - he is not a big fan of the snow. In my journeys, I have had past roommates ask about Ollie and send Christmas cards wishing Ollie well. He really is a great cat - people LOVE these cats!

Some Ragdoll things I have experienced in my care for Ollie: he loves food!  I feed him WD Feline which helps keep his weight down and maintains good urinary function.  He is actually not a fan of people-food; does not care for cheese or even milk...strange?  For awhile, he did like soy milk.  Overall, I 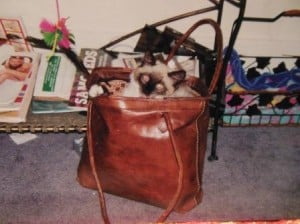 keep his diet fairly strict these days. Ollie loves his kitty grass too - very good for them!  He loves his water too!  As far as his grooming, I brush him about once a week.  I only had one occurrence where he had experienced mattes but I then had him professionally groomed - lion cut of course!  Because Ragdolls are so easy going and docile, he received an A+ at the groomers!  They stated they never had a cat that was so easy to groom!  He would rub his face against their brush...my favorite thing about Ollie is that he is quite comical. One time, he jumped up on a dresser where a candle was lit and he sat there for a moment - completely unaware he just lit his tail on fire!  I had to chase him to 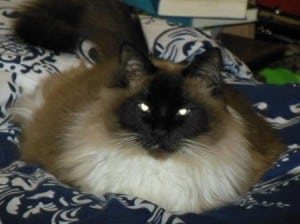 get the flame out as he had no knowledge or urgency himself to remedy the matter.  Sometimes I think the Rags can be a little spacey - but always endearing.

Ollie is true to his breed in that he not only flops over when held, but he is fairly large and follows me around everywhere in the house. He craves interaction which I found odd in comparison with my past cats. Ragdolls are engaging like a dog, but independent like a cat. Ollie has to sleep between my husband and I in our bed; he has my husband hooked and he was not a cat person with the exception of this Ragdoll. I am a newlywed, and this year for 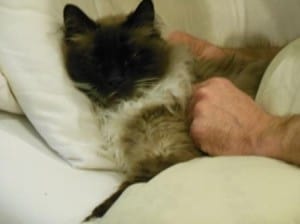 Christmas, my husband got Ollie a 36 can pack of moist food and wrapped it - so sweet! Also, Ollie loves his scratching post in the shape of the elegant chaise lounges - this I highly recommend as a scratch post - it is a little more expensive but well worth it in order to protect your furniture; besides he loves it! Most all that come in contact with Ollie are captured and fall in love with him. I hope to always have Ragdolls going forward.  Ragdolls are the best and I am simply in love with this breed - I highly recommend. 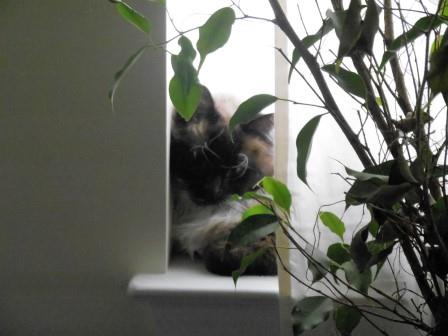