I have had cats for most, of my 60 years. I can not remember a time when I have been without a cat. All of my cats, with the exception of Oliver have been rescue cats or strays... I have wanted a Ragdoll for a while, after reading about their temperament and what great pets they make.

I contacted  Brightstone Ragdolls, a breeder here on Long Island and put a deposit on a kitten  that had not even been born yet. I anxiously awaited for his arrival and like a new mom, I kept busy by  trying to pick out a name for my Blue Lynx Bi- Color  boy. The name I came up with was “Oliver”.  When I met him for the first time, it was love at first sight. I could not wait to bring him home. He was born November 26,2010 and I brought him home February 19,2011 5 days after my birthday. Before his arrival I went out and bought him all these cute little toys, to find out that his favorite toy was and still is, a straw tied in a knot.

Oliver as a kitten

Oliver will fetch his straw  or one of his other favorite toys and bring it back to me to throw it again.

He is such a joy. He was very easy to train. He will do almost anything for a treat. He truly is a puppy cat! He will sit and give me his paw and when I ask for his left paw, he lifts up his left paw. He really does know his right from his left paw. Again he will do this for his treats. I also think he knows sign language too because he will come up to either my husband or myself and lift his right and then left paw telling us that he wants a treat. I really think that he has us trained instead of me training him. 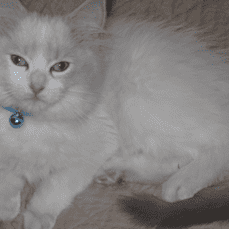 Oliver as a kitten

Ragdolls are such lovable cats, he does not scratch us or our furniture. I really wish that my older domestic shorthair (12 years old) would get along with Oliver a little better but he just tolerates Oliver. I guess it’s the age difference.

Oliver has the need to be with us no matter what we are doing, when I do the laundry, he sits on top of the dryer while I fold the clothes.  When my husband is busy fixing something around the house, his helper is non other than Oliver! To bad we can’t teach him how to hold a flashlight. He helps me make my bed and loves being under the sheets. Forget about mopping the floor, he chases after the mop. Life is never dull with Oliver in the house.

I have thought about getting another Ragdoll in the future, but I love Oliver so much and I want to give him most of my attention. My husband and I have to take separate vacations because we don’t want to leave him alone or put him in a kennel. I live my life around my cats.

He follows us all around the house so we usually know that he is not far away from us. I think he is going to be a big boy because he is just over 10 lbs. now at a year. Could be all the treats he gets for being such a good boy.

I was very surprised at how little Ragdolls shed. I brush him   weekly, which he is not fond of and I clip his claws on a regular basis as well, even though he does not scratch anything except his scratching post.