In May, 2016 I received a phone call from a friend who breeds Ragdoll and Ragdoll/Himalayan cats. She had a male kitten who was a ‘poor doer’ and she wanted to know if I had any interest in taking him in to keep or to get treatment and then find him a home. (I work in the veterinary field.) I agreed and went to pick him up the next day. At the time I was binge watching ‘Greys Anatomy’ on Netflix and the episode I had just finished had an older intern, who was in his 50’s, named Norman. When my friend offered me this kitten, I had a few names in mind and added Norman to the list, sent her a text with my choices, and she texted back that he was a Norman for sure. The next day when I saw him, he was, Norman was his name! 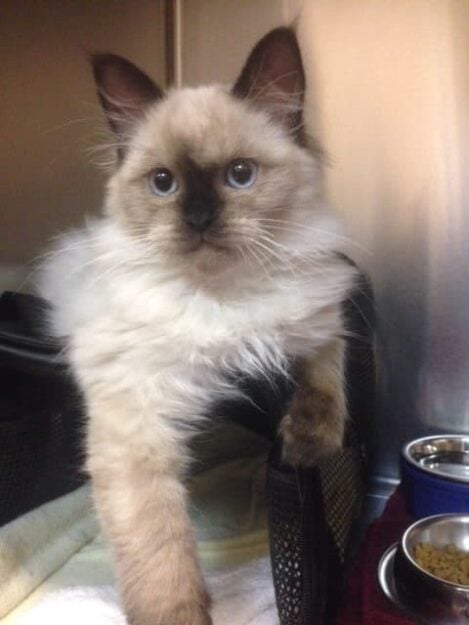 My intent was to treat Norman and find him a home, but he managed to purr his way into my heart in less than a week and he never left. He also befriended my 18# DSH black cat named Thai and they became inseparable quickly. 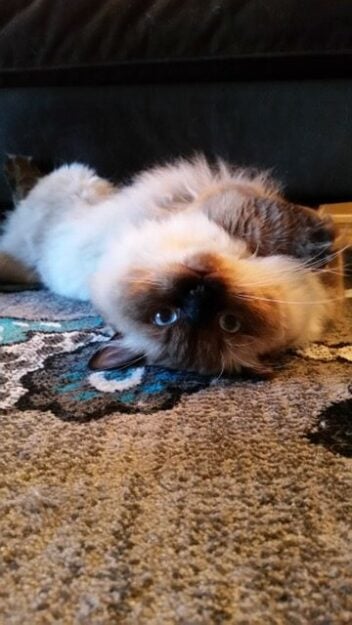 As Norman grew up, the Ragdoll characteristics showed up more and more. He loved to sleep or lay on his back. When laying on his stomach, Norman kicked out his hind legs one on each side and his front legs were extended in what I call the Superman pose and he would lay his head on one of his front legs — the pose was precious and adorably Norman! He was a talker and had a big purr. He loved meal time and was the last kitty to be fed and would run with such enthusiasm to his bowl whenever I called his name.

Norman didn’t enjoy being held unless he sought me out. Usually I was sitting on the couch and he would come up and give his normal greeting of a meow, I’d pick him up and sit him on my lap, his back side against my stomach, and give him kisses and pats for as long as he would allow. Those moments were the best and he was always the most relaxed and content. He did love affection though. He would do figure eights through my legs over and over until I pet him.

He had what I called a Jay Leno Chin, which became less prominent as his coat and mane grew in, but every now and then I could get a good look at it or capture it still in a photo if the angle was just right. 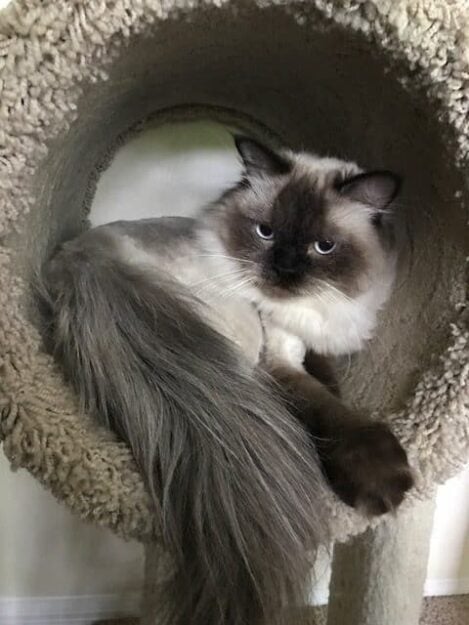 Norman’s dislikes were having his nails trimmed and being brushed, the belly was the worst. He matted twice badly and had to have a lion cut because he refused to let me brush him on a regular basis. The matted fur came from the Himalayan side, but he looked handsome in either coat length and didn’t seem to mind one bit being in a short coat. What he did mind was the process of getting the lion cut. The first time wasn’t too terrible, but the second time was a struggle. Oh boy, I’m so thankful no one was seriously injured. 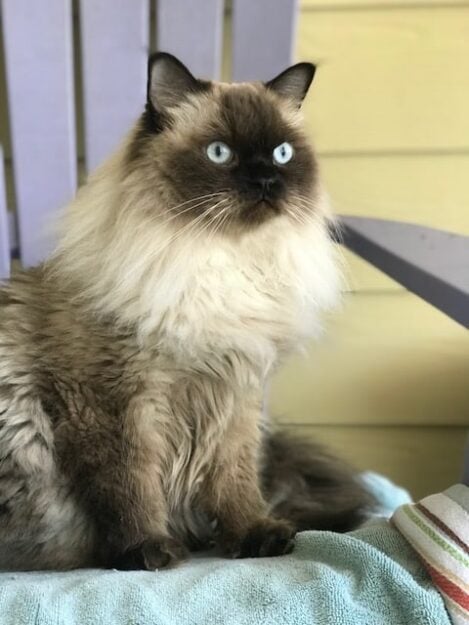 Norman’s favorite past time was sitting outside on the lanai watching the world go by. He was intrigued by the outside but also so shy. When people came over he would hiss and hide. That little bit of screen must have made him feel safe enough to venture out and explore, but if the front door opened he wouldn’t dare to cross over that threshold. 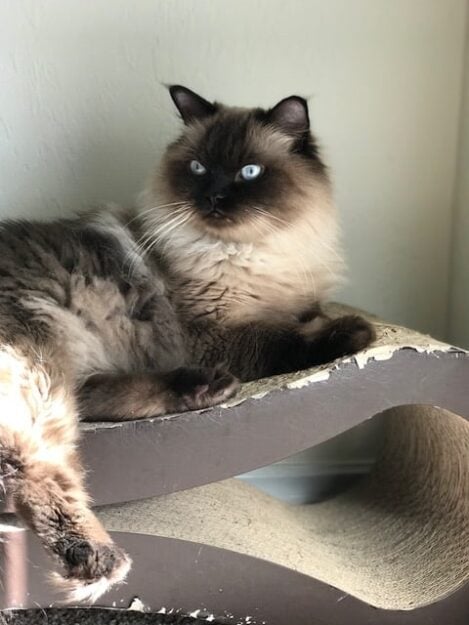 In November, 2018 we moved into a new place and there were many changes before November. I noticed that there was kitty urine on the carpet in January, 2019. It took me some time to figure out who was the culprit. I finally found out as I caught Norman in the act. I decided to bring him with me to work on a Sunday and do a urinalysis to rule out any medical issue as I was 98% convinced that this was a behavioral issue from all the changes we had gone through. The second I looked into the microscope I knew...he was loaded with struvite crystals and a slight infection. He was started on an antibiotic and a urinary food, and I hoped for the best but expected the worst. Tuesday night after work, I checked his bladder and he had a urinary blockage. I went back to work and decided to try 24 hours of care. I received a text that when they sedated him and tried to express him that he only had a plug and he was urinating a good stream, so the previous plan wasn’t needed. I went into work on Wednesday hopeful, but when I checked Norman he was blocked again. I struggled the whole morning with what to do through tears and went to check on him again and he had urinated a good amount on his own. Wednesday was my last shift for that week, so I brought him home both relieved and cautious. He still wasn’t eating enough to do anything to dissolve any of the crystals, plus I had to start worrying about him getting fatty liver as the last time I had actually seen him eat a meal was the Saturday before. Thursday he went into the litter box twice and urinated, took his medications like an awesome boy and tolerated me syringe feeding him some urinary canned food, which he doesn’t like to begin with. Friday I didn’t see him urinate all day, but with the history of his urinating, I decided to keep monitoring him, continue with the meds and syringe feeding as he still wasn’t eating. Before bed on Friday night he hopped in and out of the box without even trying to do anything, so I decided to wake up early Saturday morning and check him. I woke about 4 am on Saturday to check him, and he was just getting into the litter box, but jumped right back out again. I checked his bladder and it was firm. I made the decision before that if he re obstructed that I would put him to sleep. This decision wasn’t easy as Norman was only going to be turning 3 in February. The fact that he wasn’t eating on his own, and at that point it had been a week, and he hated the syringe feedings and had started running from me now too.

I will miss his sweet, expressive face and how he asked for snuggle time, but most of all I will miss saying his name and him answering with his meow and darting in front of me to get to his food dish.