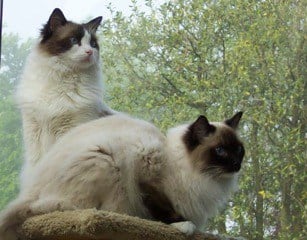 After our two cats passed away in late 2003, I felt the emotional toll was too great to get more cats.Two weeks later my wife and I felt so lonely that I started to look at many breeds of cats and discovered the Ragdoll. i has never heard of them before and their look and description seemed almost PURRfect. So a few weeks later we found a local breeder, named Heartthrob Ragdolls who had a house full of Ragdolls and spent about three hours playing with them all and chose the final two. They were just a few months old then. They seem to be related by having the same father and were just a few months apart. 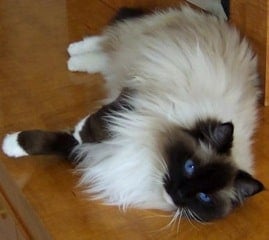 We have had Murray and Sam now for nine years.  The time spent with them has been amazing. Not really sure how we came to pick their names out but their gentle and sweet behavior and intelligence has just been something we have cherished all these years. We would love to have more Ragdolls throughout our home in the future.They love to chase each other around the house and any type of toy will do.A great item is called a HUNT A TREAT from Petmate that gives them some fun in getting to their treats along with the PET HAIR MAGNET, a great pet hair cleaning tool as well that can be found in most pet stores and on the net too. 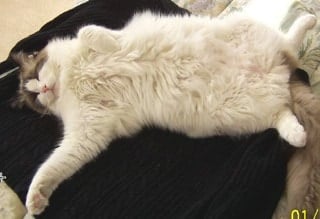 Eating is their favorite past time with Murray who was a giant kitten weighing in at a healthy 16 pounds with Sam at 8.5. Most of the time you can find them sleeping together under the covers where we make a tent by propping up some pillows for them.We plan on keeping them around for a very long time.Since we love these cats so much, a thought occurred to me late one night in starting up a site called- PURRsonals.com where cat lovers from around the world can meet other cat lovers for chatting, friendship and maybe even a bit of romance. and recently being in the pet business making all kinds of products as a result again of the love for cats, came up with the idea for a soft, comfortable and decorative PURRsian rug for your kitty to lie and sleep.Thanks, Sonny Crane =^..^=