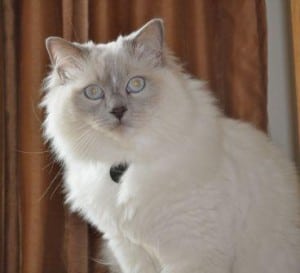 Hi,  please meet Mulsanne.  He is a 2 year old blue mitted Ragdoll we got from Dr. Jen's Ragdolls in the Chicago area, when he was just a tiny kitty.  He has been a joy every day since we adopted him.  He makes us laugh every day with his kitty antics!

For anyone who doesn't know the French language, Mulsanne is pronounced: mull SAHN, named after a famous annual endurance car race, the 24 heures du LeMans (or in English, the 24 hours of LeMans), that has a very fast stretch of course called the Mulsanne straight. Also, Mulsanne is the French town near Paris where the track is located. So, as a little kitty he made his own little race tracks in 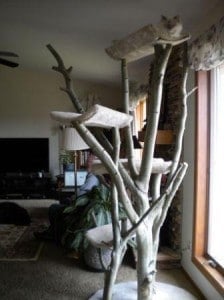 our home and earned his speedy name.  Now that he's bigger, he could use a bigger house to zoom through.

Instead, my husband built him a very real aspen tree house that he adores playing on and spending hours sleeping atop of.

We happened to be the February 2011 winners of Lupine Pet cat collar, harness and lead set that we thought we'd try out since his great trick was to zoom out the door to the front yard or garage many times.

He really seemed to want to follow our Newfoundland dog Jewel into the yard and neighborhood and visit with neighbor kids and dogs. So...we did.  We harnessed up and now he takes walks throughout the neighborhood, meets other people, kids and dogs and gives everybody great 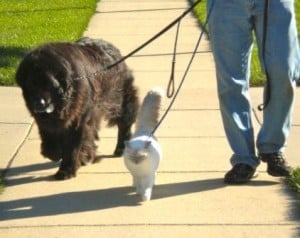 entertainment to see a kitty walking on a leash.  It is quite something to see the contrasting pets on a walk together: giant black dog and little white kitty.  He loves her immensely.

Like many pets, he greets us at the door when we arrive home, tucks us into bed at night and is always sure to greet first thing in the morning when we're in the bathroom.  He's generally wherever we are, or the action is.  He's very devoted to his birdwatching post since we have feeders on the deck.  He's also 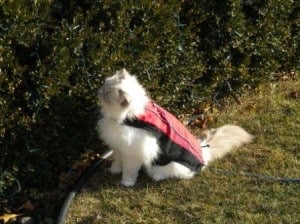 spotted squirrels and raccoons a number of times.  He's also a fine keeper of the fish in the aquarium and watches them closely.  He has many varieties of toys he enjoys, especially if they're Jewel's toys. The favorite is a ping pong ball--zoom he goes! He's a little less of a lap kitty snuggler type and more of a busier player and not at all interested in grooming or coddling of any kind.

The outdoor picture of him in his little jacket, he's checking out the Christmas lights just applied to the shrub row.

Again, he's been more of a joy than we ever imagined he would be. 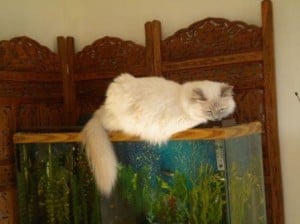 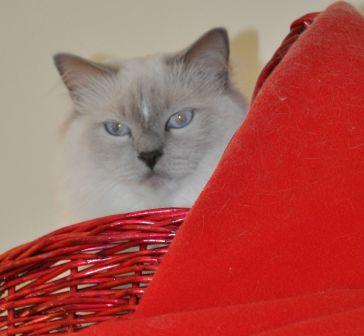