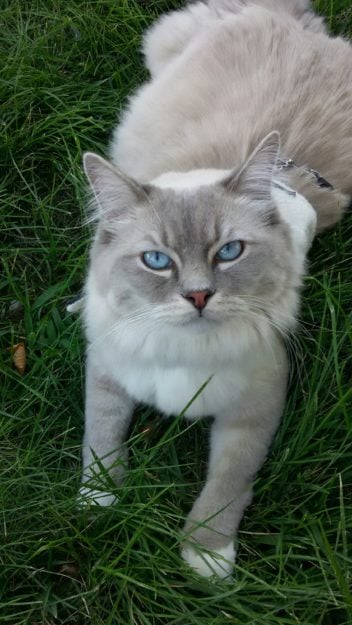 My ragdoll cat is named Mr. Blue. We got him in October 2015 when he was 3 months old. We live in King of Prussia area (my mother and I) but drove one day to Newark, Delaware where the breeder was located. She had many kittens there but two were brothers….both were blue lynx mitted ragdolls. We picked the smaller of the two and my mother named him Mr. Blue on the drive home because of his blue eyes.

I primarily wanted a pet to keep my mother company. She’s 86 and I moved her back from Florida in 2014 to be with me after my Father died. She was home alone a lot because I had to go to the office for work. We’re only allowed cats as pets in the condo where we live, so I did a lot of research before selecting the Ragdoll breed. I liked that they are puppy-like and calm-natured cats and I also thought the blue mitted ones were really attractive.

It turns out the decision to buy this particular Ragdoll cat couldn’t have worked out any better. My mother and I really love Mr. Blue. He loves to go outside, so we take him almost everywhere. We got him a pet stroller and he also walks on a leash. He runs to the door whenever anyone needs to go out hoping he can go. He is very calm and very quiet in the car. That’s the other reason why we can take him because he’s very good. We don’t keep him in a carrier or anything like that in the car. He just sits on the back seat. In general, he’s a very quiet cat. Very rarely meows except when he thinks he’s going outside or sometimes in the morning when he’s hungry. 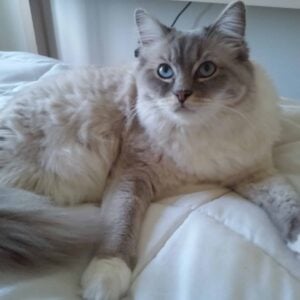 A lot of people stop us and say how beautiful he is and are really taken back by seeing a cat on a leash. Many people said they had cats but couldn't get them to wear the harness or walk on a leash. They asked me if I trained him to do this, but I just put the leash on him and out we went. They also want to take pictures of him. One woman on the Atlantic City boardwalk told me that he was the most beautiful cat she ever saw!

He likes to play a lot when he’s home, but gets bored easily. There’s only one toy I found that kept his interest and that was a feather wand cat toy I got at Amazon (pet fit for life). He eats a blend of fancy feast wet food and Royal Canine Dry Food. I mix them together now because he started getting sick on just the fancy feast right around 1 year old. The vet recommended the Royal Canine so that solved the problem. 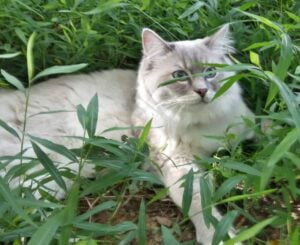 Mr. Blue is not a lapcat. As a matter of fact, I only remember him jumping up to sit on my lap one time since we brought him home. He very rarely sits on any furniture other than a table I have in the dining room or on my bed. He rather sit on the floor. He purrs a lot when you pet him but cannot tolerate this for a long time or being held for more than 10 seconds. He’ll try to “wiggle out”. He’s very good at the vet and thankfully they cut his nails because I have trouble with this. He seems to like dogs better than other cats. He’s usually not in the company of either but we once boarded him in AC for two nights and there were multiple cats in the room. A lot of them hissed at him at first and Mr. Blue seemed stressed out. After that experience, I try to book hotel rooms that are pet friendly so we just take him with us.

There is a link below of Mr. Blue out in the park. It’s actually a vacant corporate center so there’s no cars or anybody over there. That’s the only reason why he’s not on a leash in the video. 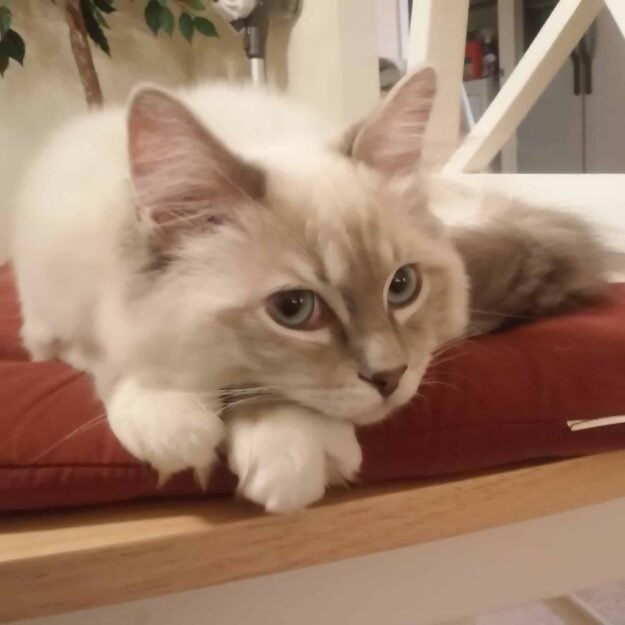 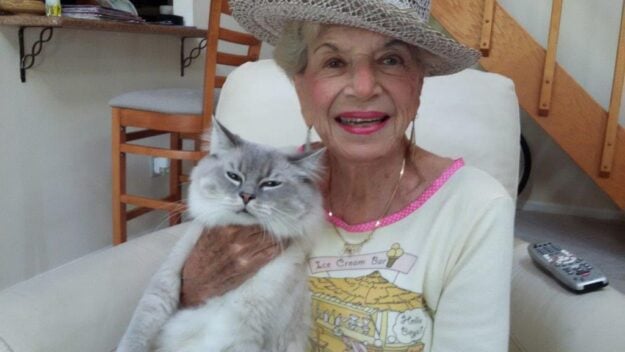 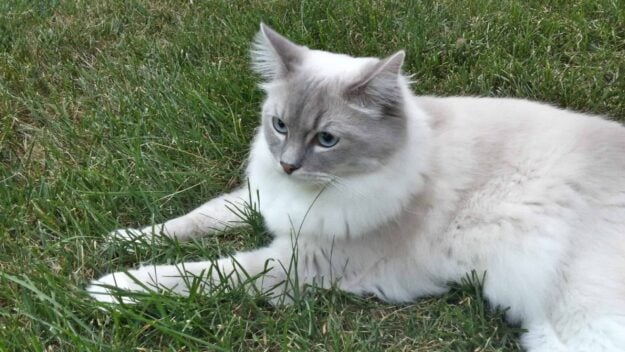 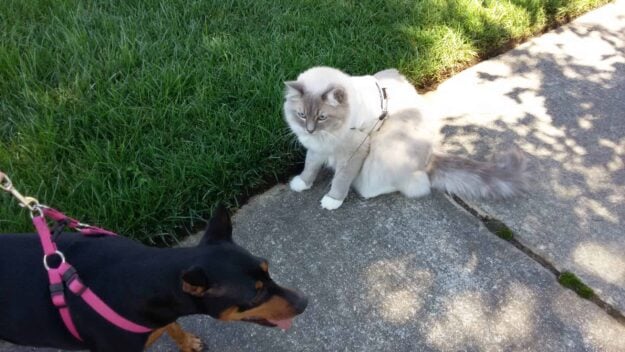 Mr. Blue is a great cat and we’re very happy he’s part of our family. If you have or are thinking of getting a ragdoll cat, I think you’ll really enjoy the experience.

Do you have a Ragdoll Kitten or Cat?  Consider submitting your kitty!  Ragdoll of the Week submission guidel