Moomin - Ragdoll of the Week I first became interested in Ragdolls as the prospect of owning a cat came up again. I have always had cats- ever since my first pair of moggies when I was about three years old. However, when I went away from home to study at university I was unable to keep pets due to housing restrictions (although I did sneak a hamster in at one point). My boyfriend agreed to get a cat when we moved in together, however, as it was a tiny one bedroom 80s box-flat that we were moving into, I wasn’t sure that it was the best place to keep a moggy. So I started researching breeds, trying to find the most suited one to our situation. I wanted to call the cat ‘Moomin’ after Tove Jansson’s Moomin trolls, as I’ve always been a fan of her work, and Ragdolls are kind of like moomins in nature, aren’t they? We bought Moomin from a breeder in Peterhead, who just so happened to be the mother of my boyfriend’s friend’s flatmate (I know that that seems like a little bit of a complicated connection, but it was enough that we felt we knew the breeder beforehand); she owns a small Ragdoll cattery called Cattitude. At the end of August 2014, he was 14 weeks old and we could take him home. The breeder makes sure that all her kittens are neutered at around 12 weeks of age, so that she can be sure that they all go to good homes with people who want them as pets, not breeding machines.

When Moomin was born, his mother Penny fell ill, and so he and his sister had to be hand-reared. One consequence of this is that he has always purred when being picked up, supposedly because he came to associate being picked up with getting fed during early kittenhood. We live in Glasgow, which is about a two and a half hour train journey from Aberdeen, and another hour’s bus ride from Aberdeen to Peterhead (which is only a small village, but it also happens to be the place that my boyfriend is from), but the breeder met me at Aberdeen, she handed Moomin over in a café at the station as we had drinks and discussed his papers. On the train, apart from the odd little meow, he was very calm (he even ended up falling asleep), he had many admirers, including the train When he first arrived, he seemed a little confused (as you might expect). He spent a fair amount of time in his wicker carrier basket, but eventually ventured out and started to play with his toys. We had bought him a cat tree from Amazon, and he still uses it a lot- in fact, if you scratch his cat tree he will get very defensive of it, often trying to bat your hand off, and, if that fails, he will try to bite it off.

I’ve started a shop with Moomin as the mascot called ‘The Little Ragdoll Cat’, and drew a portrait of him in ink as the logo. At the moment it’s just on Etsy and at fairs, but if I get enough support, I’m hoping to turn it into a physical shop one day with Moomin as my ‘shop cat’. You can find us on Facebook here. 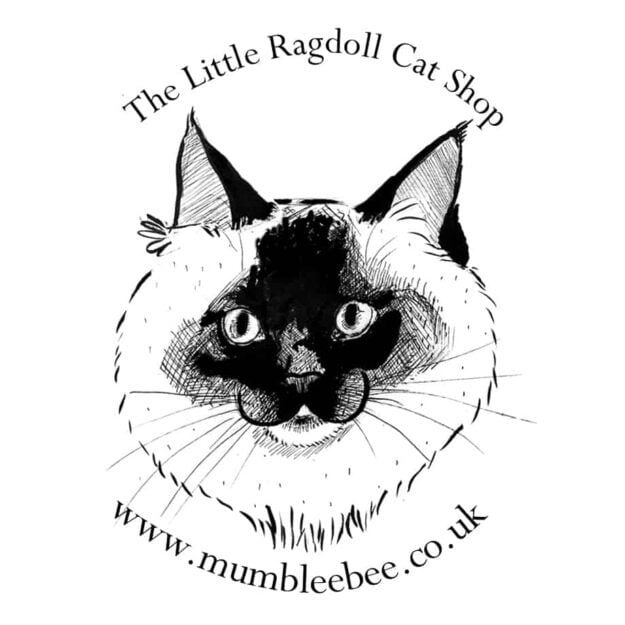 And, of course, the Etsy shop is here.