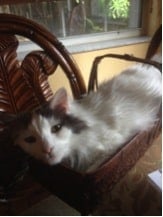 Before I picked up my first ragdoll cat, I had spent 18 years of my life with a great feline companion. I found her in a car engine when I was in the seventh grade and,  due to my immaturity, she was named Gassy. She, like ragdolls, was longhaired, possessed a sweet disposition, and became limp when I picked her up. I had never known cats to be so affectionate before Gassy. I wish I could’ve been there during her final hours. But, while I was away finishing my last semester of my undergraduate degree, my mother threw my closest friend outside, a cat that had never been outdoors, because she left a hairball on her dining room table. I was told, months later, that Gassy lost her fur and disappeared in two weeks time. I can only assume that she hid somewhere to die in peace.

The relationship I shared with Gassy is what inspired me to find a cat with a similar disposition and ultimately to adopt a ragdoll. Because I had seen instances where a cat’s personality is unlike its

personality when the cat is initially adopted, I wanted some certainty that the cat I chose to be part of my family would be as affectionate or more affectionate than the day I adopted her.  So, I researched ways to observe cat behavior as all of my previous cats were strays that found me. Of course, the more I researched the more it became apparent that young shelter cats could not provide me with much certainty. I decided to take my search towards pure-bred cats. After reading about and seeing videos of Ragdolls, I knew that it was the breed for me. 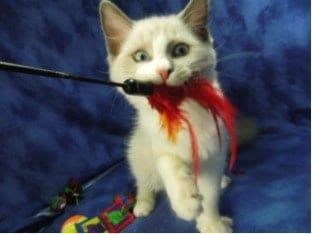 I found a breeder online and made a call inquiring about her next litter. The breeder is Aunt Bea of Siambalirags. After telling Aunt Bea that I was interested in a female cat, she sent me photos of two females in her most recent litter. Both kittens were blue bi-color. One was perfect to the Ragdoll breed standards. The other kitten, however, had a grey flame outlining her nose on the left side and a black spot on her nose.

Even though she wasn’t perfect to breed standards, due to the gray flame and the black spot on her nose, I had a strong, inexplicable feeling that she was the kitten I was going to pick. I asked about the differences in personality between the two females, and Aunt Bea confirmed that both were affectionate but the one with the gray flame was by far the most affectionate of the two. I sent my deposit on the gray flamed kitten and drove up two hours that weekend. To me, I thought it was more important to have a friend with a great disposition than a beautiful cat that might show little interest in me. 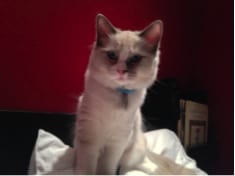 The ragdoll with the gray flame was later named Molly. While I received criticism that she was too pretty to be given such a “common name” like Molly, I was drawn to the name for two reasons. First, I wanted to name her something that I could attribute to a friend, not the member of a royal family (i.e. Victoria, Alexandria, etc.) or something solely based upon cat stereotypes (i.e. Princess, Snowball, Fifi, etc.).  Second, I enjoy naming female cats with a name that ends with the “ee” sound. So, Molly was the name that stuck.

Molly is six months old now, and she is a great addition to our home. She rarely meows unless she is at the vet. Primarily, Molly is a cuddler. But, she also loves to watch TV and look outside the window. When I am asleep in the morning, Molly sits by my bed and waits for me to wake up even though food is already waiting 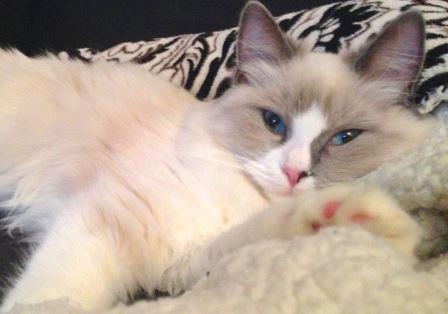 in her bowl. Also, we are spending some time training her to come when she is called and to sit on command. As of now, the commands always work when she knows her favorite treat, freeze dried chicken, is nearby. Generally, she responds well to commands without treats too.

Her favorite toys are the GoCat Cat Catcher (the mouse version of Da Bird) or the Cat Charmer (a rainbow-patterned teaser toy). I recommend that cat owners try the GoCat mouse and ribbon-teaser because I found that Molly was scared of Da Bird, the most commonly used toy, unless I dragged it across the floor. At maximum, Da Bird and other toys could only retain her interest for 5 minutes. The ribbon-teasers and the Go Cat mouse toy can get a solid 15-20 minutes of stalking prey. Additionally, if you own or want to own a ragdoll, buy the Furminator for de-shedding. It will change your life. 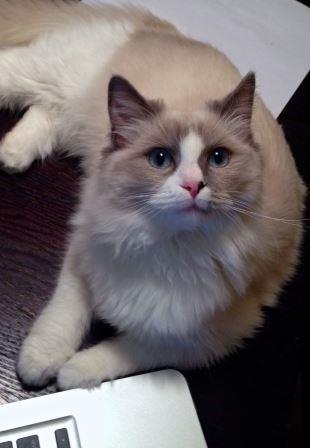 I love my ragdoll cat. I would recommend this breed to anyone that is looking for a good, gentle friend in a cat.