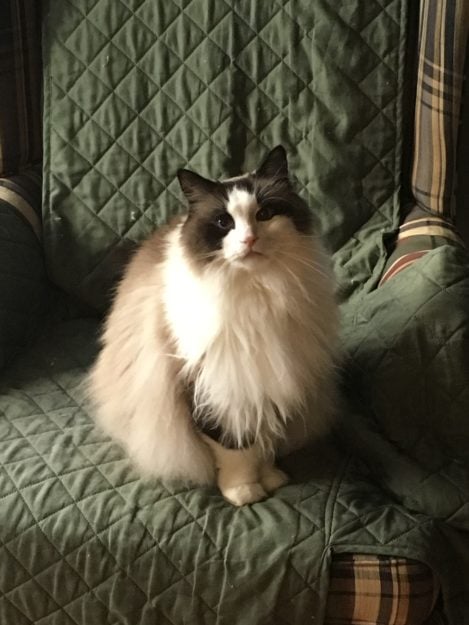 Twelve years ago I think it was love at first sight. When I entered the room he immediately caught my eye with his athletic maneuvers, social behaviors and man was he cute! And from across the room he also finally saw me once he stopped tussling with his brother by the bar stool. He immediately came over and looked at me and smiled. That was it. I was hooked. I tried to play it cool and sat down to socialize with the other ‘eligibles’, but he was persistent. He would constantly ask for attention with his eyes and trying to be as cute as he possibly could! You might think this story is about a speed dating round, but in reality it is a story of how my Ragdoll cat, Mojito, chose me. 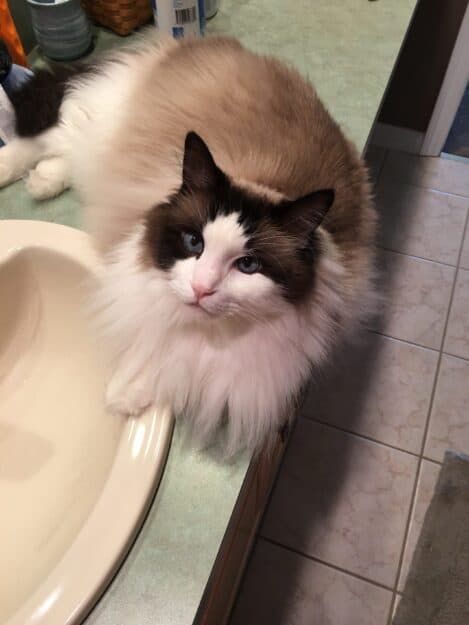 I met his breeder at a pet Expo I attended 12 years ago. Most the other breeders I talked to there would not have any available kittens for 10 months or so, but this breeder had a newer litter with 4 kittens available. I really wanted a seal bicolor, and she said she had two. I wanted one soon as I had lost my senior kitty to cancer 3 months earlier, and my other boy, Martini, seemed distraught over being alone. So I visited her at her house to see the litter. 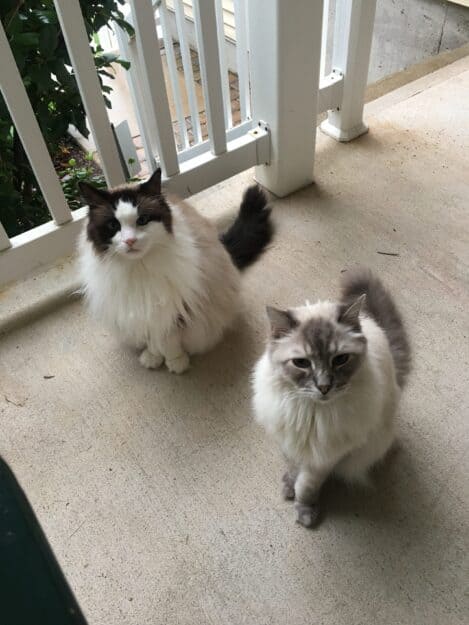 This is also a good story about choosing a breeder. The one who I got Martini from was 3 states away and she was winding down her breeding operation. So she was no longer an option. This new person was one state away and had availability. So we made a date for me and my girlfriend to go visit her cattery and kittens. I thought it was unusual when I went to her house. Lots of ‘stuff’ everywhere in the yard, and oddly, interior household stuff on the outside deck. It looked like she had cleared out all the stuff in the house onto the deck to make it presentable for the visit. It was a mound! Really loud rock music from her teenage son was blaring, which promptly was turned off when I rang the doorbell. I was not allowed to see the actual cattery in the basement (I get it, other infant kittens, Toms, pregnant Queens, disease spread from visitors), so I went to a game room with about 5 kittens and their queen. After playing with the litter mates, and Mojito making the choice for me, she asked for a deposit. I signed a contract, and in 6 weeks I could pick him up. He would have his first shots, worming, and be vet checked. When I neutered him, I could send her the Vet certificate verifying it and I would get my TICA registration. Back then HCM screening was in its infantile stage-science wise, and not a routine practice. And there, my friends, is the rub. 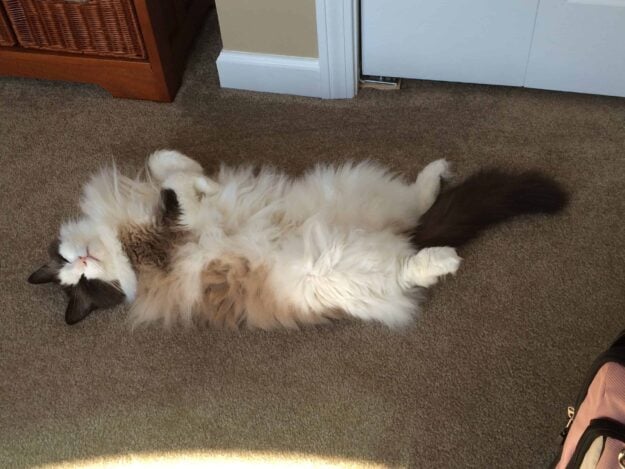 When I picked him up, he did not have his shots as the ‘vaccine company’ sent her the wrong ones. OK well, I guess I can see that happening but she didn’t even offer a credit so I could get the shots on my own. I almost left there with Mojito mewing on the kitchen counter. She started to get a bit cranky. It was then when I said to myself that I could not leave Mojito there. Not in that environment. So I took my boy home, put him in quarantine, brought him to the vet for his check and vaccines, and eventual neutering. Of course sending in the neutering certificate to her resulted in no TICA registration papers after repeated attempts to contact her. No longer searchable on the internet either. Well, live and learn, I wasn’t going to breed him anyway. 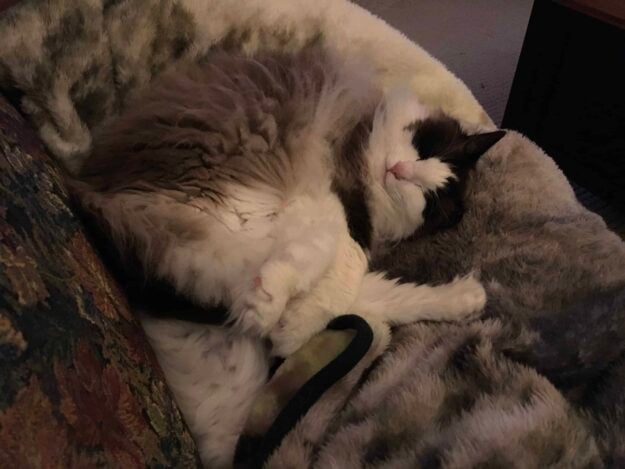 But on to Mojito. Oh man what a personality! What a cutie! I adore seal bicolors! He and Martini got along immediately after quarantine for a few weeks. He is more dog like than cat like (aren’t all Ragdolls?). He pulls heart strings by knowing how to do a cute behavior to get your attention. Flopping on his back “look here! Don’t you want to rub this?’ He snuggled one of my husband’s wool socks when he slept on the bed at night. He was very interested in Tortilla chips, and would take a few tiny nibbles until he was tired of them. We discovered one day that he enjoyed Corona beer, as we caught him licking the rim of my husband’s beer bottle, and meowing for more! OK note to oneself, don’t leave beer around! He loved to be vocal and talk to you in a tiny meow way. My husband especially loved Mojito as they were buddies in the basement shop. Mojito would help him fix things. He would ‘help’ dad cook, sit on the porch with us on Friday nights after a long week while we had cocktails and he and Martini had catnip. He would fetch his ‘twinkle’ toys and bring them back to you. He loved to be covered in kisses as he laid on our bed in the AM when we got ready for work. Purring louder with each kiss on his head, belly, and back. He would return them by licking my fingers and rubbing against me. Snuggling on that bed was his favorite. He would cause trouble under the sheets when we made the bed. Silly. What a darling. A big gentle boy at 13 pounds. 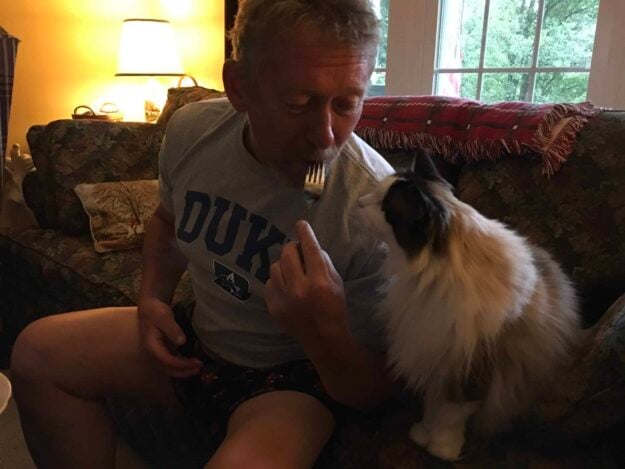 You might have noticed the last paragraph is in past tense. My poor boy developed HCM with a bad murmur about 5 years ago. Atenolol helped for a while. He was easy to pill. I told him it was a ‘cookie’ and I would pretend to give one to Martini, where Mojito would promptly step up with his mouth almost open to have one too! He was plagued with medical issues off and on, which we fixed, but we could not halt the HCM. On Monday, October 1st 2018, after our AM kisses and hugs ritual, he developed sudden onset of congestive heart failure. I heard loud painful meowing just as I was about to leave for work. Thank God I was there. I knew this time would come but was told not for a few more years. I rushed him to the emergency vet and they stabilized him. They told me he had fluid in his lungs and around his heart. They could help him with meds, and hospitalization for a week, but it would probably happen again in 6-8 months. I could not risk him going through that again, when I perhaps wasn’t there. We helped him pass over the rainbow bridge that day. His fur was covered in my tears and snot from crying so much. I don’t think he minded? I told him how much we loved him and thanked him for choosing me and loving me, and making all of our lives better. I would see him someday when it was my turn. 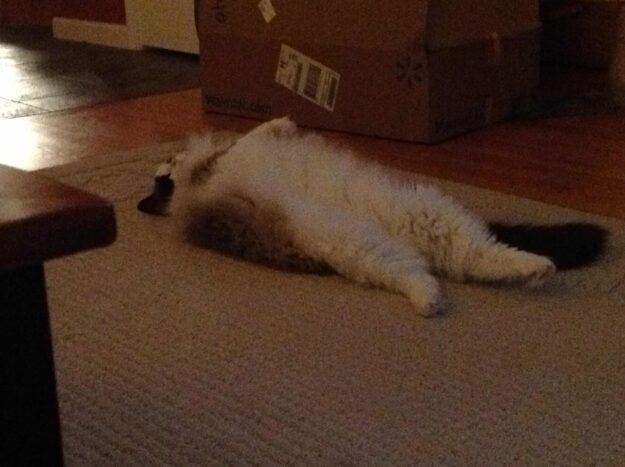 Sorry about the long story, but it is healing for me. And I hope that my experience with that breeder will help ‘Floppycat’ brethren take home a message on how important it is to get a healthy kitten. Research Breeders. HCM is horrid and witnessing congestive heart failure in your fur baby is horrid for them and you. In due time, when I search for my next fur baby, I will be sure to research the breeder and also ensure that they are negative for the HCM gene. 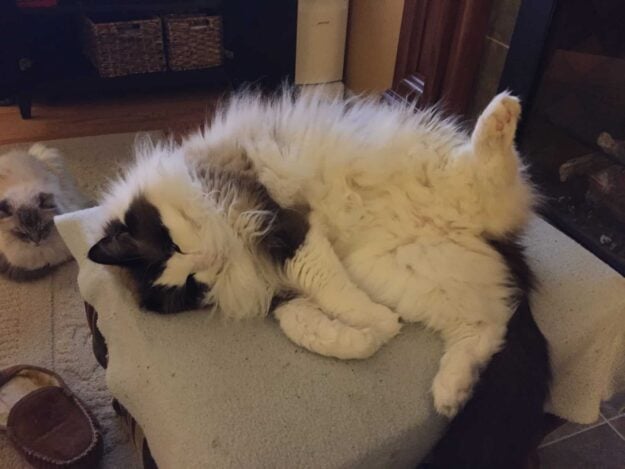 Mojito left us too early. And we have been a mess all week. But I am sooooo fortunate to have had him in my life. And I would not trade that for the world. I hope you enjoy the photos of him.