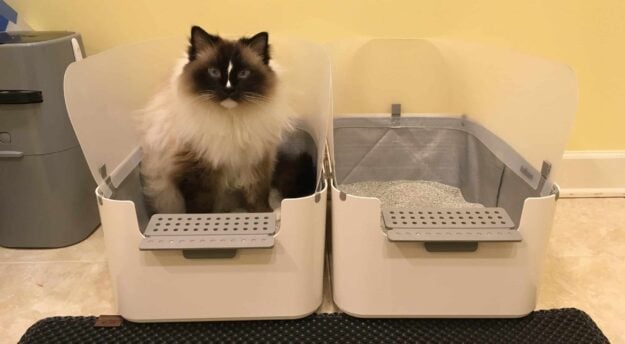 One night in November or December 2017, a reader, Teresa, and I were emailing and she mentioned that she had purchased the Modkat Open Tray Litter Box for her high peeing cat, Illaria, and how much she liked it.

I was very familiar with Modkat as a company – but their products, although great, were not usually made for a large breed cat like a Ragdoll.  So I immediately went to their website to check them out.

From the looks of it, the Modkat Open Tray Litter Box looked like it would be big enough to accomodate my Ragdoll cats, Charlie and Trigg; so, I wrote Modkat and asked them if they would please send us one for review and so they did.

The Modkat Open Tray Litter Box arrives needing to be assembled.  As you can see, there is a large white box, but then there is a liner, liner clips, a splash guard and splash guard clips as well as a little walk-off guard where they step in and out of the litter box.  So it arrives like that for you to put together – it’s not difficult and they sent along visual instructions on how to do it.

The only problem I had in the setup process was with the splash guard that seemed to be “warped” in the wrong direction during the shipment process.  Modkat offered to send out two new ones – but I didn’t like the idea of wasting the ones that were sent.

I was also sick and not as on top of my emails at the time, which was a good thing because I started messing around with the splash guard and found if I simply flipped it in the opposite direction, it would then sit flush against the liner and the white box portion (which is what it was supposed to do anyway).  You can see in the final review video below that I had a bit of a time wrestling it into place, but overall it is not too bad once you get the hang of it.

The walk-off step probably does reduce litter scatter – but mine leap over it, so it doesn’t reduce litter scatter in the traditional sense for us.  The high walls (the splash guard) do help prevent litter scatter, for sure.  I can’t comment on whether or not they prevent leaks because mine don’t pee that high.  But the reason Teresa got this litterbox is because of her high-peer, so it has worked for at least one reader and her cat!

The reusable liner I was doubtful of – but it really does keep everything neat and my cats’ pee and poop didn’t stick to it, which made it easy to scoop their clumps too!

I like these litterboxes a lot – especially after the litterboxes we had in our master bath before – the Modkat litter box ones are sooo much better at preventing litter scatter.  Although they are a bit “tight” for my cats, the cats used them without a problem and willingly used them.  So while they might appear “tight” for my LONG Ragdoll cats, it didn’t prevent them from using them.  As I explain in the final review video below, it’s important to know and realize litter boxes are very subjective – depends on how your cat pees and poops, where you place your litter boxes, what your preferences are, etc.  And based on my personal needs and my cats, these litterboxes worked really well for us.

This is just cool and one of the reasons I think Modkat is a cool company.  There is a cardboard box that comes inside of the white litterbox – and that cardboard box holds the splash guard and the little liner hooks, etc.  Well, once you have all of that removed, you can then make that box into a fun puzzle toy for your cat.  Modkat sends the box perforated with holes to punch out and also sends a little ping pong ball with a poop emoji on it.  You can see Charlie playing with it in the review video below, but to be honest, it was Trigg who really played with it daily.

We received the Modkat Open Tray Litter Boxes for review from the manufacturer.  Receiving the free product and the review fee did not influence this honest post.

Check out our other cat product reviews.