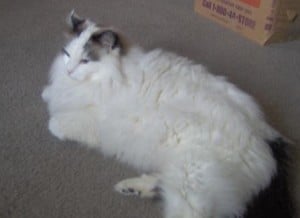 “Is it my imagination, or are cats getting bigger?” said the only other person in the veterinarian’s waiting room when Moby and I arrived for his FIV/Felv screening.  Moby had been an indoor/outdoor cat,  surrendered by his owner to Purebreds Plus Cat Rescue in Northern California with the familiar and always perplexing excuse that his owners “didn’t have enough time”  for him.  Not enough time to let him supervise the folding of laundry?  Not enough time to snuggle with him on the couch while watching David Gergen on CNN?  Not enough time for grooming, certainly!  Moby arrived in foster care with his body so closely shaved that there were long bald patches, making me wonder whether he had a chronic skin problem.

Maybe a more experienced foster parent would have been less suspicious, but I’d speculated as to what more serious issue “not enough time” might conceal.  Had Moby really been abandoned because of litter box problems, destructive behaviors, or aggressive tendencies?  Would I hear from the veterinarian that he exhibited telltale signs of HCM?  I need not have worried.  Moby was healthy and   “litter box perfect,” did not scratch carpets or furniture, and was, within a day of arriving at my house, an affectionate cuddle dumpling, not vocal except for an occasional, comical “Eh!”  It took a few days to write an appropriate descriptive sketch and get a reasonably good photograph to post on the Purebreds Plus website,  but after the requisite two weeks of isolation (to ensure that he had not been incubating an illness on intake), I made Moby officially available for adoption and waited for the telephone to ring.
One week passed, then two weeks, then a month, two months, three.  After three months, I received one inquiry, but the potential adopter was keenly interested only in my other foster cat, a cross-eyed Havana Brown named Rivers.   You are probably asking yourself why, given that rescue has become socially desirable behavior, no one would have come forward to adopt this big, personable boy.  Yes, he is mismarked, with too much white to be a seal bicolor and too much color on the hind legs to be a van, yet with his majestic size, his abundant soft coat, and his classic Ragdoll personality, one would have expected him to attract interest nonetheless. 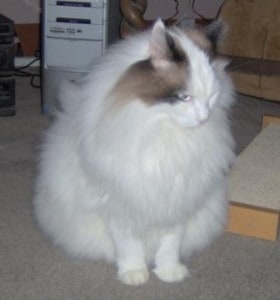 His impediment, you might have guessed by now, was middle age:  Moby was approaching his seventh birthday, and although seven is not at elderly for a cat—Ragdolls are not even fully grown until the age of four—many adopters will not give serious thought to a cat older than two or three.  The one potential adopter, in her final message to me, made this point clear:  after “deep reflection,” she and her husband, despite being of retirement age themselves, had determined that Moby and the only slightly younger Rivers were too old for them.   With Moby’s birthday looming, I made the decision to adopt him and his companion Rivers myself. 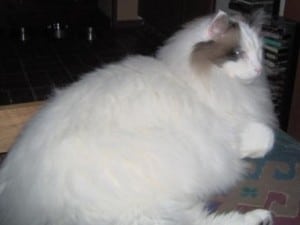 Moby is a dream cat, a large, fluffy boy who is friendly even to strangers and whose favorite pastimes are grandly surveying his domain from the height of a cat tree, playing chase-and-wrestle with Rivers, being brushed in the early morning, and nestling on my lap with his head on my chest and his fat paws rhythmically kneading my arm.  He lives entirely indoors now and, although he enjoys looking out the window, he shows no signs of Wanderlust; I think he would rather stay inside, where it is warm, than venture out into the San Francisco fog.  I have another Ragdoll whom readers of this column will eventually meet online, but she is much more reserved than Moby, and let’s just say that, at least so far, my two Ragdolls share litter boxes but not confidences!

My cats and I appreciate our welcome to the Floppycats community.  Thank you, Jenny, and happy holidays!

Want more Ragdolls Cats? Enter your email address to get Floppycats.com’s updates plus you’ll be eligible to win our monthly giveaway.

Do you have a Ragdoll cat?  Want him or her to be featured as Ragdoll of the Week?  Please feel free to share your kitty with us by contacting us.