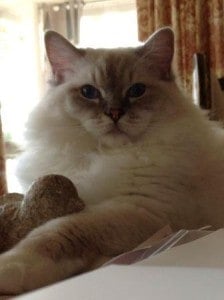 A cat lover all my life, I found myself looking for another kitty in 2011 two years after our beloved Himalayan passed at age 15. I had always heard about the Ragdoll breed, but did not know much about it. So after doing some online research about their fun and playful characteristics, sweet personalities and sheer beauty, I decided it was the breed for me!

Ragdolls come in a variety of colors and patterns which are all beautiful, but I narrowed my choices down by choosing one that did not resemble my last kitty…..I wanted this one to look different.  So I chose the blue lynx mitt and wanted a female and the hunt was on! 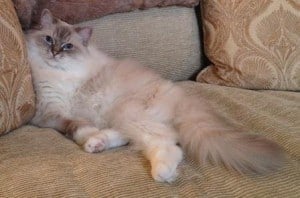 I found my girl Finley at Riterags in Asheville, NC and she arrived September 7, 2011.

She was three months old and the cutest and softest baby we had ever seen…..it was truly love at first sight!   Over the next two years the love and bond we have with her has grown stronger every day.  Her adorable ways, playful nature and captivating beauty make us laugh and smile every single day! She is a true member of our family. Her health was perfect….never sick one day…..never even looked like she felt unwell on any day…..until November 30,2013. Two days after Thanksgiving Finley was showing some concerning signs. The day before she threw up a few times and we noticed a larger than usual pee pee in the litter box. By the next morning Saturday, the 30th, it was another very large pee pee and she seemed to be not very hungry, drinking a lot of water and looked like she just wasn’t feeling well. I had a busy day planned that day, but after noticing these signs decided to stop and look up these symptoms online. Everything I read pointed to Acute Renal (kidney) Failure. I thought surely that was not it, my girl was only two and never sick one day. I rationalized she likely had a little bug and was possibly a little dehydrated. We decided to take her to the vet that morning to rule out the renal failure so we wouldn’t  have that on our minds all weekend. The blood work was done and the vet returned 20 minutes later to tell us Finley was indeed in acute renal failure and needed to get to the emergency vet hospital immediately for treatment. Shock, despair, fright, consumed us. 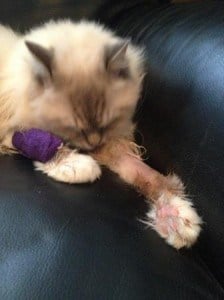 How could this have happened to our perfect baby? The vet asked if we gave her the Chinese treats and we confirmed absolutely not. We could not understand this horrible news.

We immediately left and went straight to the vet hospital where she was evaluated and immediately hospitalized. The emergency vet came out to speak with us and after asking a few general questions asked if we had any lilies in the house. (Finley is strictly an indoor cat.)

I paused and remembered I did bring flowers ( a bouquet from the local market) in for the table on Thanksgiving. I don’t usually do that because I don’t want Fin around flowers much but made the exception due to the holiday. I kept them wrapped the night before and placed them on the table 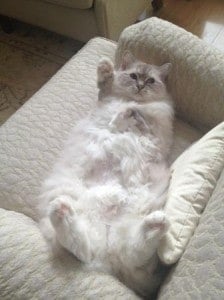 Thanksgiving morning when I set the table. I told the doctor I never saw Finley near the flowers nor evidence that she had chewed them or played with them………but obviously that doesn’t mean it didn’t happen while I was not looking.  The doctor explained it takes only one lick of the pollen or small ingestion of any part of the lily flower or plant. I was devastated. Something I did could now potentially kill my cat. I have had cats my whole life and never heard this before. We were all so heart broken.  The doctor gave a hopeful, yet cautious potential outcome but made no guarantees that she would survive. They reassured us they would do everything possible to save her. Treatment  included IV fluids to flush the kidneys along with other meds for secondary issues. She was was tested for physical reasons this event may have occurred and all were negative. Since Finley was a healthy young cat, the 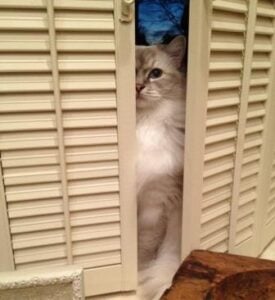 doctors were confident the lily was the cause since the symptoms started right after the lilies came into the house. After six long days in the hospital where we visited her twice daily, Finley’s kidney values were in a normal range and she was able to come home. The next day she developed a high fever which required another night in the hospital with IV antibiotics and fluids and four weeks of oral antibiotics. After some tests, the cause of the fever remains unknown. After this, Finley required daily subcutaneous fluids for three weeks to continue providing her body with additional fluids to aid the healing  of the kidneys. She then went to an every other day fluid regimen, then no fluids to see if she could manage on her own all the while monitoring her blood values on a weekly or bi weekly basis. This has been 10 week ordeal, but the great news is that Finley has recovered and her kidney values are within normal range! She is her normal adorable, fun, playful, beautiful, sweet lovable self and we could not be happier! We have our baby back! The team of doctors that treated her have repeatedly told me that because we noticed the early symptoms Finley showed and acted quickly to have her checked and treated is likely the reason she survived . If we had waited even a few  more hours, the damage to her kidneys may not have been repairable. We will check her blood levels again in three months and we will always have to monitor her kidney function throughout her lifetime.

Finley has always eaten a diet of premium dry food and wet food. Since this ARF event, the doctors have prescribed a renal prescription dry food ( she will not eat the renal wet food) mixed with her favorite premium grade dry food along with premium wet food twice daily. Finley has always been one to drink plenty water so that is in her favor too. Obviously, the more moisture in the diet the better for the kidneys. However, all of the doctors involved in her case agree she needs to be on the renal prescription cat food long term and if she will not eat the renal wet version then the dry is perfectly fine for her. It is a food specifically for cats with renal issues.

I write because I want everyone to know the lethal dangers of the lily flower to our precious cats.

Lilies, any type of lily and any part of the lily, can kill your cat. Please make yourself aware of all toxins that can harm your cat in any way….but particularly the deadly ones! This was a very heart wrenching and difficult experience…..as well as a very expensive one!…..but we made it through to a happy ending!  A HUGE thank you to Jenny at floppycats.com who corresponded with me daily during this time with her genuine love and support ….as well as other floppycats followers.

We are now back to normal and enjoying and loving our Finley more than ever!!

21 thoughts on “Miss Finley – Ragdoll of the Week”