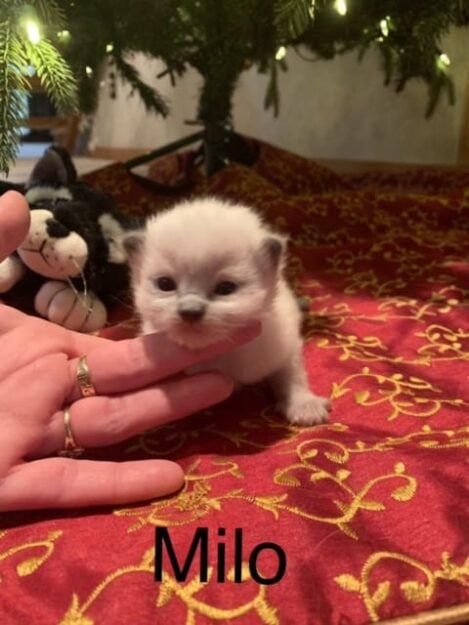 Milo was born on December 6th 2018. He is the first cat I ever purchased. I have always rescued many cats ever since childhood. Often having more than 8 indoor/outdoor cats at a time. After having two beloved elderly cats pass around 6 years ago I finally decided to get my absolute dream kitten. 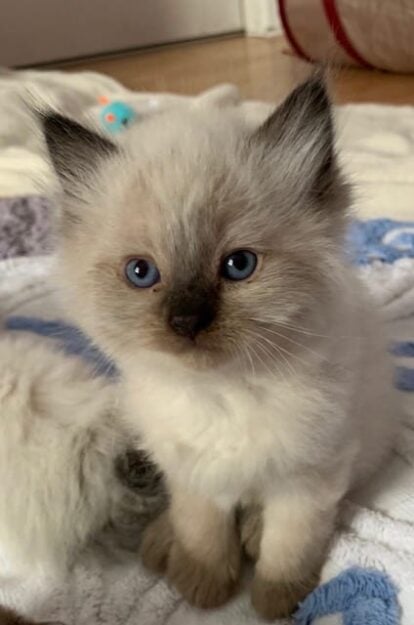 I became interested in Ragdolls when I started watching Timo and Timo and Toby the Ragdolls channel on YouTube. Timo was a beautiful seal bicolor who sadly recently passed. YouTube is also how I found out about the Floppycats channel. I fell in love with these cats and had to have one of those cuddly soft blue eyed babies. I got Milo from a small home breeder near where I live in Ohio. She has since taken a break from it and Milo was from her second to last recent litters. His mom is a Blue Lynx and his dad is a blue by-color. His maternal grandmother is a seal point just like him and she was featured in a commercial for The Ohio State University once.I got to meet Milo when he was 9 days old and reserved him then next day. Completely unsure of what his colors would be. All I knew was he was almost twice as big as his 3 siblings and he had a grey nose, ears and tail. I guessed correct that he would be a seal point even though his parents are not and I was correct. I chose his name Milo so that there was no argument with my children. He loves to bite, a lot. It's just his personality I guess. He never scratches anything because I have always clipped his claws each week. He honestly doesn't even know he has claws I think. At least he ever uses them on anyone. He loves to pick up small toys and bits of this and that carry it around in his mouth. 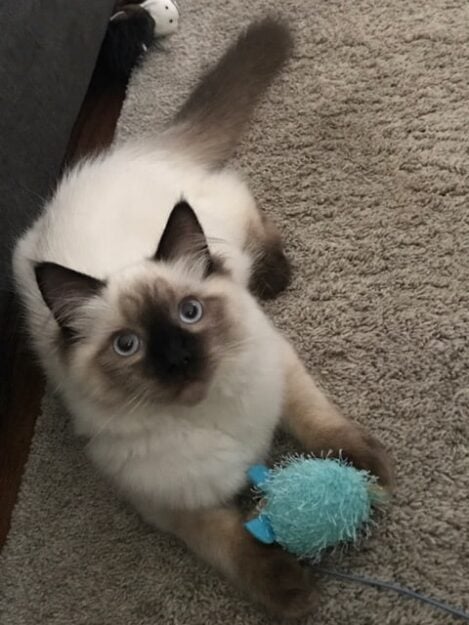 He will rip into any fresh produce I have, especially ears of corn. He steals bits of ham from my children's plates when they are are distracted, and runs around like a lightening bolt jumping from every couch and chair only to end up jumping through some curtains into his favorite window seat. He loves to jump up on the dinner table and stand completely up and smack the chandelier crystals to watch them swing and twinkle. That is another thing, he is such a long boy and he is extra good at standing on his back feet. He can even jump while standing and land on his back feet if in his favorite window chasing flies or dreaming of catching the birds and squirrels outside. 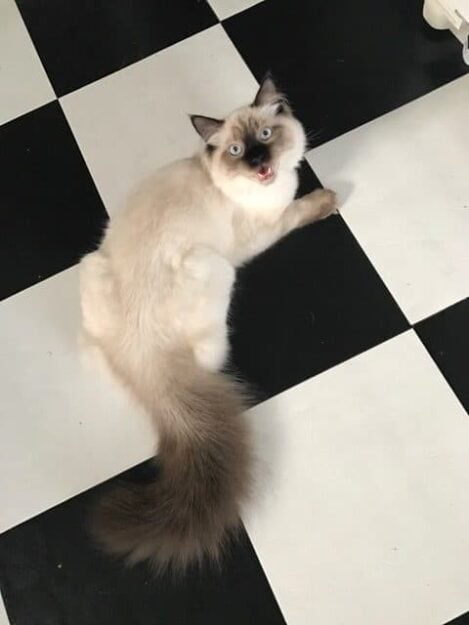 He a complete giant and was the size and weight of a full grown house cat at 6 months. He has three modes. Wild, hungry, and floppy. He truly is a floppy boy when he is in a loving mood. All I have to do is hold him upside down on my lap and scratch his neck and he melts into purring butter.He is so playful and does all the classic Ragdoll stuff like greet me at the door every time I return home, following me all over, being obsessed with water like laying in the tub and shower when it's still wet, and becoming a floppy doll baby when he's held and loved on. He has 2 small children, my husband and myself, and a Newfoundland puppy to play with. He likes to tease the puppy and when he does, the chase will be on but he loves it. He gets lots of love and attention from our family. He is adored by my children and they play with him whenever he awake. They also sneak kisses when he's sleeping. 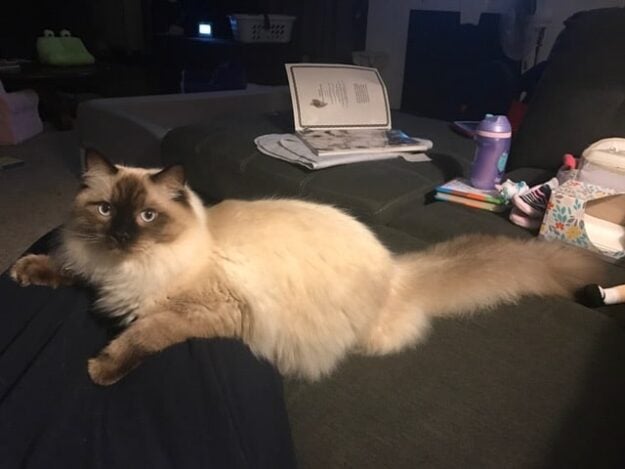 Milo's favorite way to show you that he wants to play is he will jump up next you on the couch and just bite your arm implying that "I'm frisky". He loves his catnip banana that was reviewed by Jenny and her boys. He also loves his cat trees (I suggest Feandrea brand they are so big and sturdy for large cats). He also loves open windows or empty boxes. He will plow through anything to get to a bug. He often kills and eats them too. He especially loves house centipedes, spiders, and flies. He's my joy boy (what I tell him over and over when I'm holding him), my shoulder kitty (he will let me hold him over my shoulder for very long periods of time), and my floofy love. 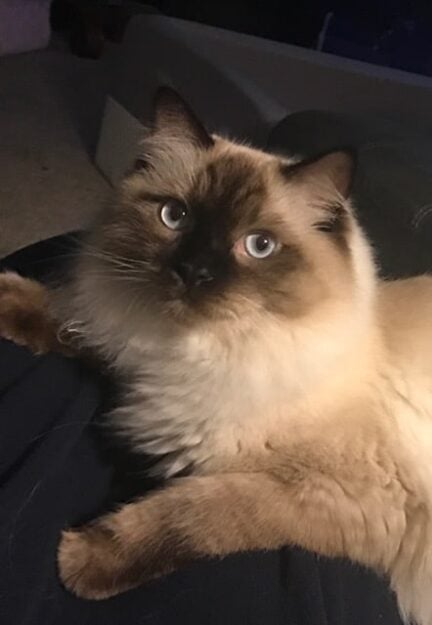 Milo has made me so happy. Not having a cat in my life for years was so hard and Milo has made life awesome. He is the softest cat I have ever had and feels like a rabbit. I adore him so much! He knows he's mine and treats me special because of it. Even if he's in wild or frightened mood I can pick him up and calm him and I love that! His color transition has men amazing to watch change and could tell from early in that he would be a very dark boy. He already has an almost completely brown belly and his white mane is so long and thick. His giant round blue eyes always memorize me and I can't wait to see how he looks when he's full grown!Do you have a Ragdoll Kitten or Cat?  Consider submitting your kitty!  Ragdoll of the Week submission guidelinesRead more Ragdoll Kitten of the Month submissions.Getting a Ragdoll Kitten? Check out our book: A Ragdoll Kitten Care Guide: Bringing Your Ragdoll Kitten Home