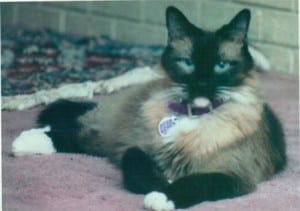 Merlin - the cat behind Merlin's Hope: A Ragdoll and Maine Coon Rescue

I got a wonderful late Christmas present in 1998. I took home an elderly cat from the humane society (not a no-kill shelter) where I was volunteering. Merlin, previously named Pinocchio, named after my favorite Arthurian character, turned out to be a Ragdoll mix (which I didn’t learn until much later when I started researching this marvelous breed). Merlin was between 9 and 12 years old when I officially adopted him on the day before he was due to be euthanized. Unfortunately, he came with a multitude of health issues caused by neglect by his previous owners. We had to have almost all of his teeth removed, one of his eardrums was ruptured due to earmites, he was severely underweight, and he had ongoing kidney and liver problems that eventually caused his death. Several thousand dollars later, my vet told me he was as healthy as he would ever be.

Merlin was a Seal Mitted boy with the most gorgeous style. We often called him Sean Connery, because he would slink into a room with that Sean Connery look and give you “the look” with his big, blue eyes.  Everyone, especially me, would melt at that look.

This gentle, wise cat became not only our family mascot but the center of our family. He was the one who took all the new cats under his wing and taught them the rules. He raised the kittens I quickly adopted: Lyonesse, Taliesin, Aslan, and Gypsy Rose. His plight and his gentle, unruffled nature quickly caused me to become a better person. After my step-father’s death in 1991, I had lost my sense of belonging as well as my compassion. Merlin made me belong. He made my cats into a family, my family. He taught me to be compassionate. He taught me to love again.

He might have been an older man, but he was very much a kitten in that he would chase the feather wand until I (not him) gave out; he would talk to me into letting out (on the patio) by saying (I kid you not) “OWWWTTTTT”;  he taught Taliesin how to hunt when we discovered our new house was scorpion-infested; he slept with his head over my heart every night.

We were lucky to have Merlin in our lives for four wonderful years, and I will never regret those years. I only wish we had had more. He died in November 6, 2002, and I thought my heart would break, but instead, I used his example to officially create a rescue in his name: Merlin’s Hope Ragdoll and Maine Coon Rescue. So, even nine years after his death, Merlin is still saving lives, just like he saved mine.

Thank you, Merlin, and please wait for me at the Rainbow Bridge.