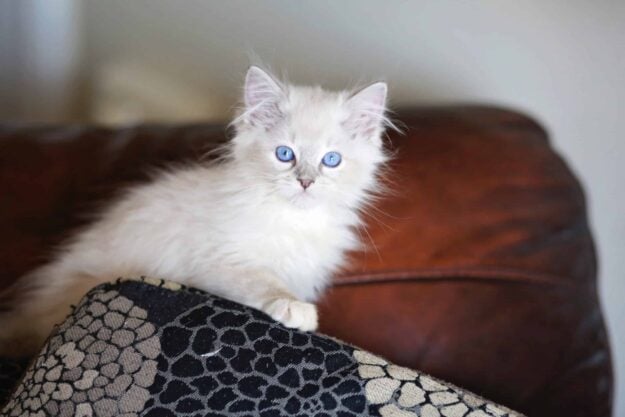 I’ve always been an animal lover but considered myself more of a dog person than a cat person. (I know, *gasp*). When my daughter was sixteen, she wanted a kitten more than anything and although we struggle with pet allergies, we finally relented and let her bring home a mangy little thing (barn kitten perhaps?). While my daughter spent the summer away, I nursed the pitiful ragamuffin through ear mites, ringworm and dog fear. After all the love and care I lavished on her—believe it or not, this cat couldn’t find it in her heart to give me a moment of regard and is, to this day, staunchly my daughter’s cat! You will often find her nestled under my daughter’s chin purring her heart out in contentment. Envious of the mutual devotion, I started considering that maybe I should find myself a purrbot. 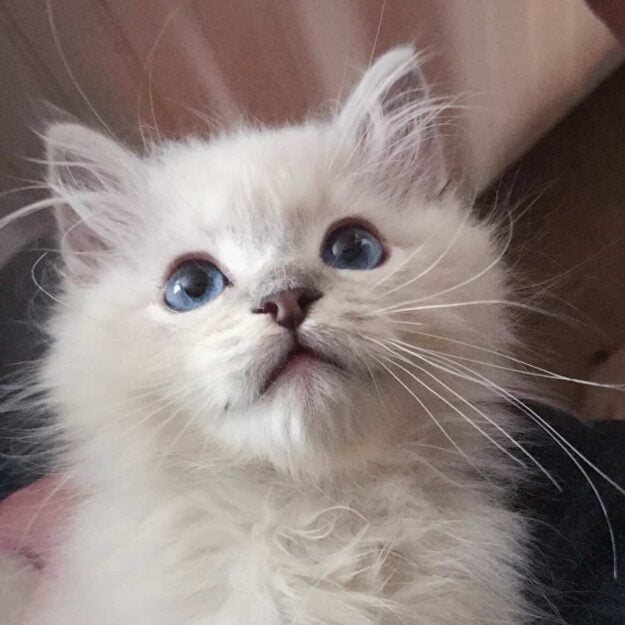 In March of 2016, I started with a simple google search “most loving cat breed” and time after time, Ragdolls popped up. Couple my enthusiasm over some of their described breed traits with color points and beautiful blue eyes and I was convinced. 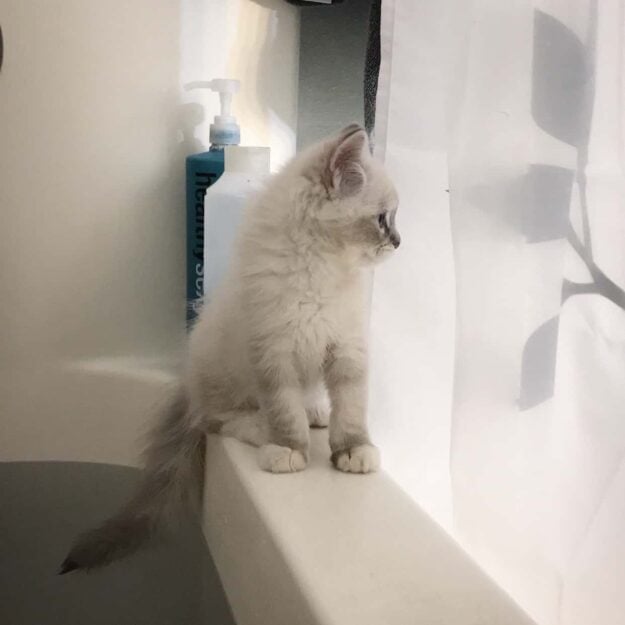 I live in a rural area and despite my exhaustive internet searching there just didn’t seem to be any breeders within driving distance of me. Even with my better judgment nagging at me, I started contacting some breeders across the country that had bigger online presences and positive testimonials. I contacted breeder after breeder only to be put on an indefinite wait list or asked for a substantial deposit to be held open-endedly until my preferred traits became available. I waited and waited only to be disappointed time and again while I watched all the cuteness scroll by on my favorite Instagram feeds. Finally, one of my most admired breeders linked to one of their queen’s breeders. I quickly started stalking that website/Facebook page and reached out to the breeder with some questions: 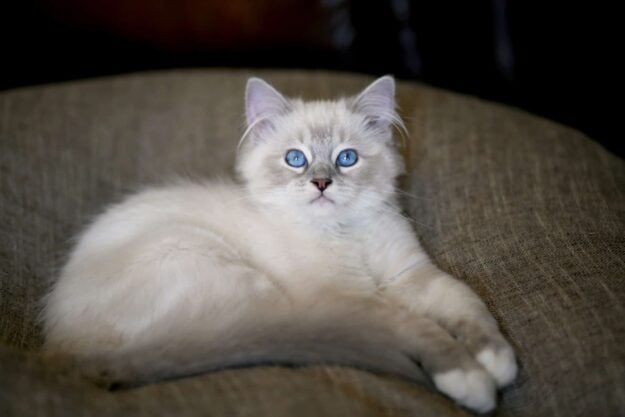 Unfortunately (for me), the first kitten I had reserved developed into show quality. Dejected, I was nearly ready to give up, but six weeks later, from a litter born 5/31/17, I learned my perfect kitten was available!! I was going to be able to have a Blue Lynx Mitted of my very own. My family, co-workers and I poured over my name lists and finally “Memphis Maddox” won out. (My family has a tradition of naming our furbabies after places) At the end of August 2017, the breeder and I made the arrangements and I met my sweet baby at a tiny airport about 90 minutes from my home. He was, of course, scared and timid, but the airline employees were so lovely and just ‘oohed and aahed’ over him. He was the most adorable thing I’d ever seen in my entire life…but would he love me? 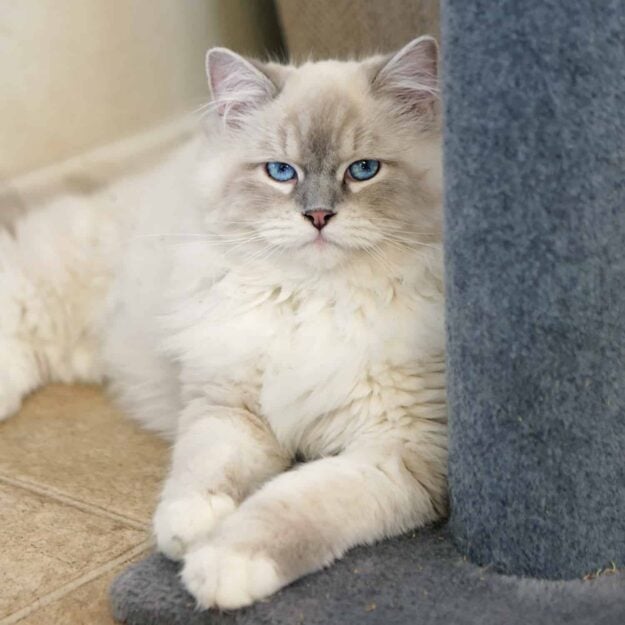 After a few days in his new home, it became concerning to me that Memphis wasn’t eating or drinking very well and traditional cat litter was a nightmare when a kitten had loose stools. Had I made a mistake? I did more reading (how did I not stumble across Floppycats sooner?) and our awesome vet assured me that he probably was just stressed over the change in circumstance and overall appeared quite healthy. I kept offering him food, water and lots of quiet snuggles and calm reassurance. Eventually, after about five days he perked up into a playful, frisky, flop of angel fluff. We slowly started assimilating him into our whole home and introduced him to his “siblings”; Quincy (aforementioned Queen of the Aloof) and Lincoln, a 100-pound lump of pure Goldendoodle love. It became apparent that Memphis was going to be the type of Ragdoll that really exhibited some puppy traits—ball chasing, tummy/armpit rubs and greeting people at the door. 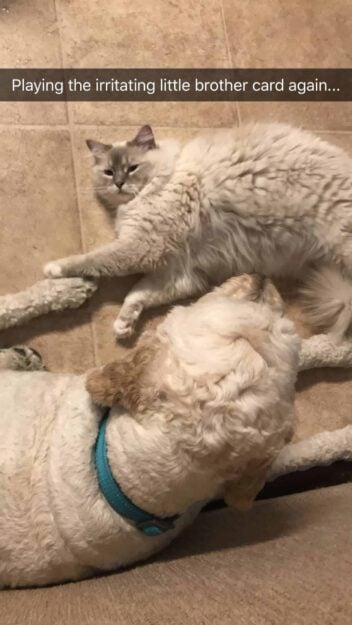 This past May (2018), Memphis turned one and things haven’t quite developed as I’d hoped…he’s floppy-ish, he’s crazy beautiful…but he is not cuddly, snuggly or overly fond of me. He tolerates my love in small doses—daily, he guides me into the bathroom where he likes to sit on my lap for approximately five minutes and receive his chin scratches and armpit rubs. However, my dream of having a warm purrbot to languish on my lap and knead the afternoon away did not come true. Often, he would rather torment his brother Lincoln, paw swiping at his puffball tail. (Think pesky little brother constantly poking at his big brother a.k.a. “neener neener”). He is, ironically, somewhat of a jealous monster…if I’m desperate for his affection, I will ask my husband for a hug and then Memphis immediately materializes, making himself known, only to walk away the moment no one else pays me interest. He sleeps on the end of my daughter’s bed taunting me as he snuggles in next to her.
Other than his personality not being what I had hoped—and of course I still adore the contrary creature—I was also surprised regarding his coat. From most of the recountings I’d read, people were quite happy that Ragdolls didn’t seem to shed overly much, and they had less allergy problems with the longer “angora like” coats…. Uhmmmmmmm…. Hair. Everywhere. He endures grooming in sporadic bits and I’m learning how to combat matting, as this winter, he’s suddenly cropping up new mats at every turn. Did I mention he is picky with a giant P? Doesn’t care for treats/vitamins. Doesn’t like oil on his food or wet food at all. Water in a bowl? No thanks—make it running and fresh three times daily, please. He suffers this noble treatment with his trademark “happy” expression—which is the same as his “you people are peasants” expression. 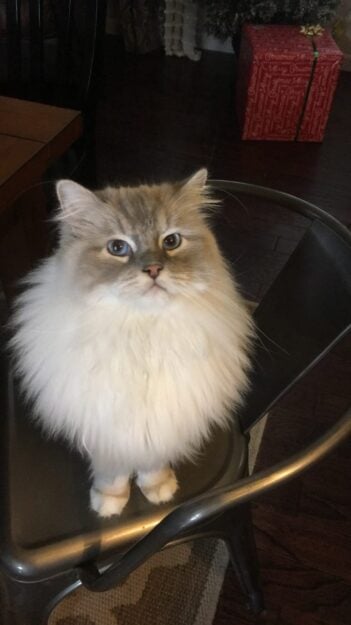 All of this to say, that even with his unexpected personality, we all get quite a bit of amusement out of him. Walk in the door and have a cat flop down at your feet making sure you know his armpits are available for a scratch? Throw a ball for a dog and have a cat return with it? Turn on the kitchen sink and have 15 pounds of angel fluff throw his head under the stream? Hear mysterious thumping coming from the bathroom only to find that he’s flipped at the cabinet door until he made a crack large enough to fit through and take perch (on the cushy bath mats put there specifically for his royal highness)? Start to put laundry in an empty basket and find it occupied by someone with no intention of moving? Buy tons of great cat toys only to have them invoke no interest in favor of q-tips and dog bones? That’s my Memphis, it’s his world, we’re just living in it! 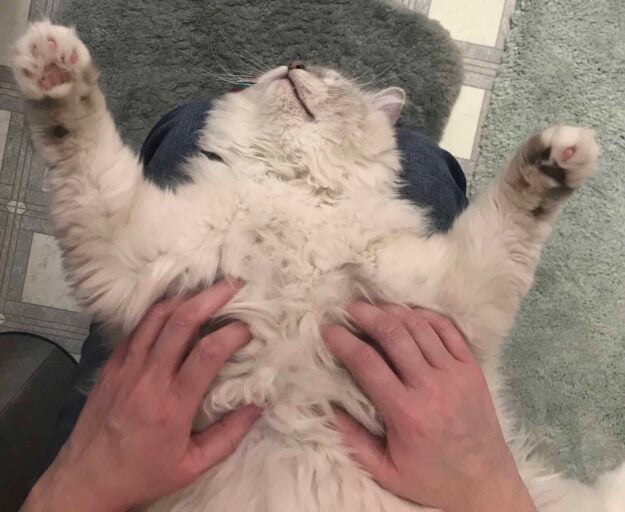