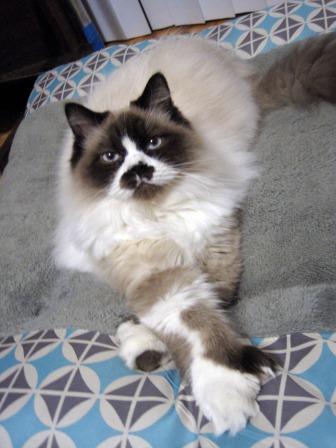 Mario came to us via an ad on Craigslist. Our beautiful 17 year old domestic short-hair, Floyd, had just died and the house felt lonely with no kitty around. I saw the ad, talked it over with my husband and made the call. The family giving Mario away said he didn't fit in with their other five Ragdolls and Persians. He was just too rambunctious for them. That was it, Mario was ours! He fit right into our home and even spent his first evening exploring all around us rather than hide like most cats do. He'd let us pick him up and never complained about a thing. Now I have learned that he doesn't actually enjoy being picked up unless he asks, and he always lets us know if we're doing right by purring his approval.

He isn't much of a lap-cat, but he is always nearby. He sits near us when we watch TV, follows me from room while I work, and is very talkative. He doesn't ask to go out and that is fine with us. We live in the woods and it really isn't safe for him to be out there on his own. When he does go out to the vet or in the yard with us, he wears a harness and is on a leash. His favorite thing to do is play with me every morning. He loves for me to wave one of his cat wands around and has even pulled them down and brought them to me at playtime. If I ever forget to get the toys out for play, he picks at me gently with his paw/claws--just enough to get my attention! 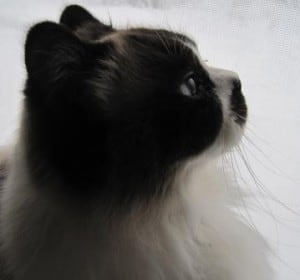 Our adorable little boy likes to hang out with our two dogs, Lucy and Jack. He enjoys sleeping on their beds so much that I had to go out and buy him his own dog bed! (He has a cat bed that came with him from his previous home, but he has never used it once since he’s been here.) He also pays attention to whatever the dogs do, sitting in the window watching when they are outside, and lining up with them at treat time. It’s comical to see.

Mario got his name from his previous owners. You see, he has a mustache just like a Super Mario Brother, so the moniker fits. He also has double paws in front.  His paws are almost as big as my Australian Shepherd’s! He isn’t very energetic, so when he plays he often lies on his back and just swats at his toys with those big mitts of his. So funny!

Mario has won our hearts and I know he feels the same about us. At his last veterinarian visit he had to be tested for a UTI, so the doctor took him into the lab for a moment. He cried for me the minute she walked out of the examining room with him, and when she brought him back he quickly snuggled right into my arms. We have only had Mario in our lives for six months now, but it’s like he was meant to be ours.  His soft fur, big blue eyes, and wonderful personality make everyone who meets him fall in love. And I couldn’t be happier that he belongs to us. 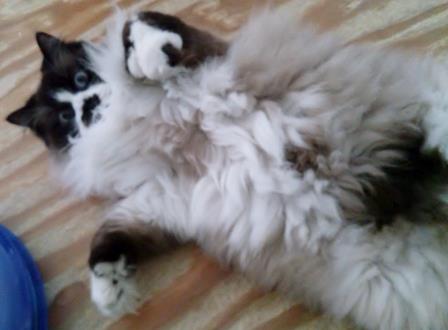 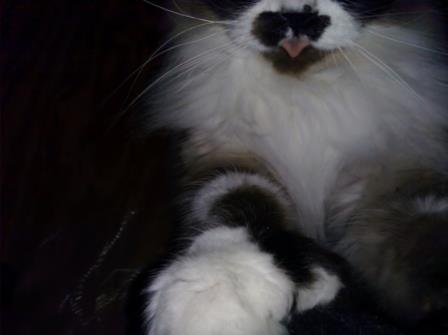 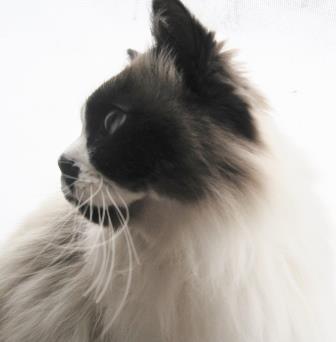 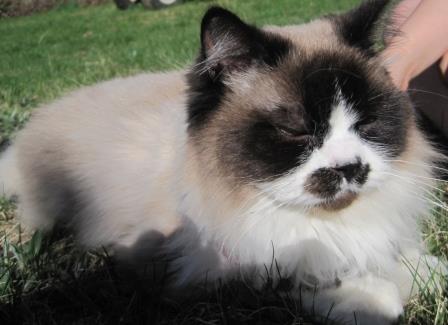