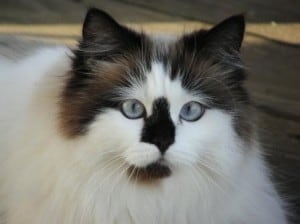 Growing up on  a large Dairy farm, I had 40 - 50 kitties to love all the time.  My mom however, did not allow any pets in the house.   She thought!

My cousin who lived a quarter mile up the road, would come over and we'd sneak a couple kittens into my room and dress them up in doll clothes.  I'm sure the kittens didn't think it was much fun. I've always been a cat person, they are my best friends, not pets.

So of course when I had my own house the first thing I got was a kitty. I've had many barn kittens and others throughout the years.  In '99 we discovered some Ragdoll kittens in a pet shop (I know now, not a great place to get them). We adopted the one we though had comical markings on her face. Our son brought her home for us, and his girlfriend named her Meeko. She's our old lady now. 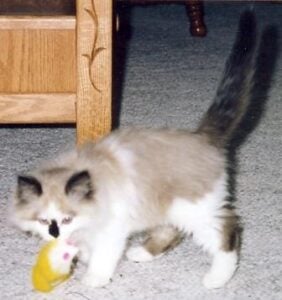 In 2002 we were in the same shop and we fell in love with another Ragdoll kitten we named Maddie Maye. Something about her spoke to me, she had the most beautiful  face and when she looked at me we connected. She was such a sweetheart.  We brought her home in a pink fuzzy blanket that she loved for years.

I remember hubby telling her when we went to bed, "you stay on your blankie ok? we'll see you in the morning".  Sure enough, she was still on her blankie (even tho she had
peed!)

Since Meeko is a grouch to everyone with fur, Maddie clung to me to play and cuddle. She didn't really like being picked up, but would come and cuddle up on my lap. Of of my favorite memories is of her coming to our bed 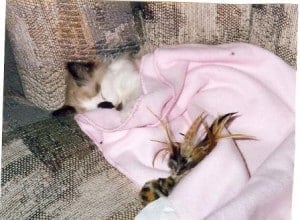 in the morning and sitting with her front paws on my shoulder. She would purrrrrr until I woke up. I loved that.

Maddie was very playful. Paper balls were her favorite. She would chase them and bring them back every time. Then stand on her tippy toes and wait for her back to be scratched. She would play as long as we would.

My husband started petting her with his foot, and soon she begged him to do it. She was very vocal and would let him know it was time for foot pets. 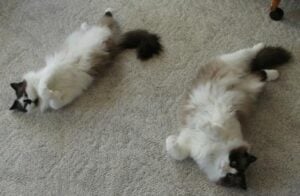 She was addicted to the Funniest Home Videos show. She would watch until a commercial came on,and then leave the room. But when the show came back on, she'd be back front and center waving her paws in the air at the screen!

When Maddie was about 1 1/2 years old we adopted her brother Charlie. They were best friends. They would nap together and it was common to see them mirror each other or lay exactly the same way! 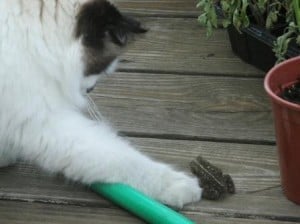 Maddie and a toad

Maddie loved to sing. Our house is a quad level with an entry hall where she would sing her meeeowwwowowowow over and over. We laughed so hard.

The first time I thought she was hurt or upset. She just looked at me like "what? I'm singing!".   She would also do this if we were out in our big yard and she didn't know where I was.  She'd sing her long song ,and I'd say "over here Maddie". She'd come running as fast as she could go and start kneading the ground by my feet. 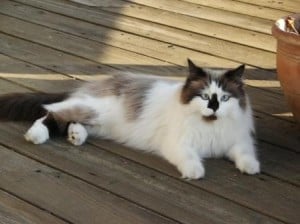 She usually stayed within sight, catching grasshoppers and gifting them to me.  If it flew away when she dropped it, I would get a disgusted look of "you let it GO?!!"  She only tried to eat one once and found out they come right back up. Yuck! Every time she brought me one, she wanted a rough back rub with my garden gloves on.  She would do the tippy toe dance. She had a favorite hiding place in the middle of a bunch of coreopsis. This picture is of her trying to "hide" before they got tall enough!

Maddie also loved to play with the garden toads. This picture is her patting the toad, and he liked it! See him leaning into her paw? !!

She also was very good at catching mice and voles. We have a lot of them in our yard. If I was outside and called "Maddie! See It? see it!" she would come running and stick her head in the hole.  I would often prop open the doors so they could come and go as they wanted. She would bring in a dead rodent and drop it at my feet. I always thanked her, and then disposed of it. 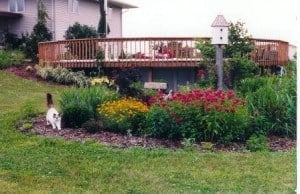 Our only problem with Maddie was that she knew the neighbors bushes were full of voles.  And as hard as we tried, as much as we scolded she would keep going across the road. Of course, that worried us because even tho we are on a dead end rural street, we had some fast driving neighbors.  Any time she went across the street, she was grounded for 2 weeks. Hoping she would learn to stay in our yard like the others.

I always said she was born with eyeliner. She had the most beautiful eyes, and I'd never seen so many colors in one kitty's fur. I would just sit and pet her head fur back and forth to look at the colors. Anyone who saw her commented on how pretty she was. She talked to people, she understood so many words it was amazing.

This is a picture of the last gift Maddie brought me.  🙁 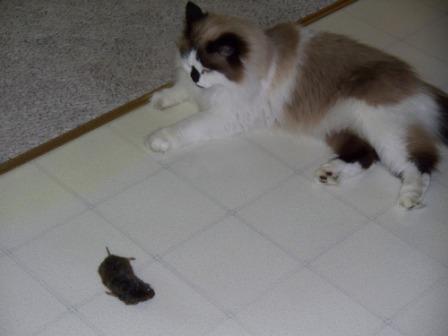 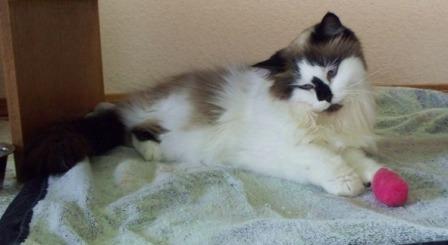 Shortly after, one morning she suddenly collapsed and couldn't stand. She was crying and I could see the fear in her eyes. I grabbed her up and took her to the vet only a few miles away. They said she'd had a stroke. Her head was tilted to one side and she couldn't stand. One side of her mouth wasn't moving. The vet didn't give me much hope, and told me to just watch her she might have seizures. 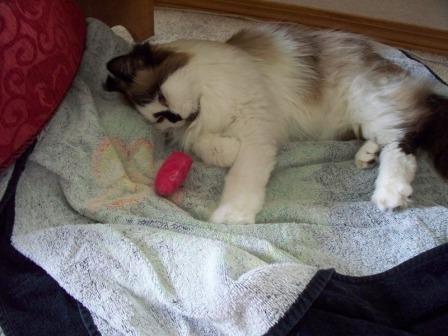 I was so heartbroken, but determined that she would be ok. I took her home and made up an area to care for her.  For a few days I constantly held her and comforted her. She wanted me to hold her and didn't stop kneading unless she slept.  I had to feed her soft food by putting a bit in her mouth, and water with an eyedropper.   Then 3 days after her stroke she started seizures. The vet gave us medicine to stop them .  Maddie started to improve and was  to eating on her own, and playing with her toys. I still had to help her with water, and she had fluids at the vet. She still wanted me to hold her a lot.

I was encouraged she would recover at least partially. I started looking at the carts to hold up her back legs and thinking of getting some puppy diapers to help with keeping her clean.  And then, the seizures started happening every 15-20 minutes. The medicine didn't help. I stayed up with her all night, holding her, talking to her, crying and begging for her  to be ok. But then I knew, she was gone. My Maddie was not there, she was suffering terribly.  We went to the vet at 8am and they gave us no hope. She'd had another stroke and it was bad.  I laid her in her fuzzy blanket, with her paper ball and mouser and we said good bye. Maddie was only 6 years old. The most unique and special kitty I've ever had. My buddy, my best furry friend.

I'm crying as I write this, almost 3 years later. I miss my special kitty every day like I've never missed a pet before. 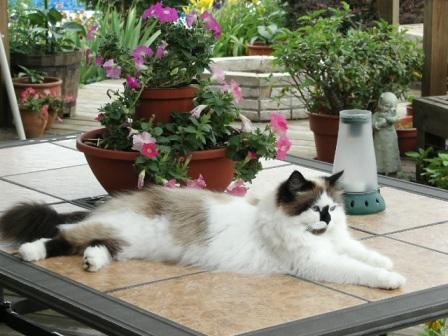 I didn't share this to make you sad, but to be sure that this doesn't happen to anyone else's pets.  You see, the day before Maddie went in the neighbors yard, they had a service spray it to kill dandelions and broadleaf weeds.  Maddie got this on her paws and when she licked it off it poisoned her and caused the stroke.  The vets office said they had 3 cats in with strokes in 2 days. In our rural area that was very unusual. I spoke to one owner that I knew, and they had also sprayed their yard. (Her kitty did recover) I have always refused to do this in our yard, but the neighbors didn't listen.  I wasn't aware they had sprayed, or I wouldn't have let any of them out. I feel the guilt every day 🙁

Charlie misses her terribly. He will still sit with is paw on her picture if I put it on the floor. 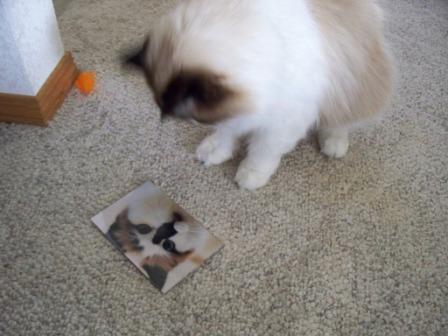 My kitties no longer go outside.  We would like to build them a catio, so they could enjoy some outside. But I won't take any chances again. My heart will never heal, my guilt will never lessen.  My Maddie Maye was one of a kind.  Please let her passing help other kitties be safe.