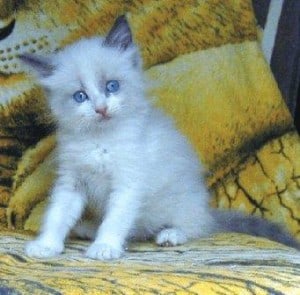 My Ragdoll Louie is an 8 year old Blue Bi-color, born March 18, 2002.  I found out in June of 2001 that I had Kidney failure. After months of doctor visits, I found out from one doctor that I shouldn’t have children of my own.  I was devastated and desperately wanted to shower my love on something. So I decided to get a cat. One day I passed by my friend’s cubicle at work and saw a picture of her new Ragdoll, Matty. I fell in love and went home and found out as much as I could about the breed; I was sold! I set out to find a breeder. I found one a few towns over. I ran over to her house and was lucky enough that she had a litter and only one kitten left. Nobody wanted him since his white triangle on his face was not perfect. I fell in love at first sight. He was only 5 weeks old when I saw him. 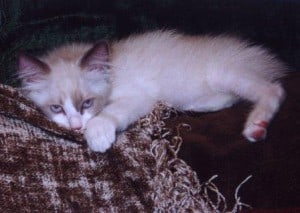 The next 7 weeks of waiting was torture. The day before picking him up, I was flying back from Vegas with a friend and we spent the entire 5 hour flight thinking of the perfect name for him.  I thought of my Grandpa & how much he loved cats, his eyes would light up whenever he saw one. So I named him Luigi after my grandpa. It turned out to be the perfect name for him; it fits him to a T. 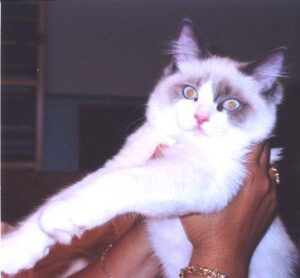 Louie at 18 weeks old, he has raccoon eyes, his points were just starting to darken

I almost lost him when he was 6 months old. He stopped peeing and pooping and I didn’t know why. Turned out he had crystals in his bladder/urine and it was too painful for him. He spent 2 weeks in the hospital with an IV trying to get better. It was slow and touchy, but he made it. I was so happy.

Louie sleeping with Scooter, our Tabby

Now we found out he has a pretty bad heart murmur and need to watch over him carefully. He lives in our loving house with Scooter, our tabby and Kelly, our newly adopted tabby. Louie loves to be held by me, but not the rest of the family. And follows us around like a puppy. 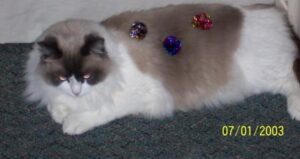 Louie at 18 months with his favorite scrunchy toys

Louie loves to be pet and kissed, and he kisses back, he likes to rub up against your bare feet or socked feet, he can't resist. He loves to give head rubs, and lay on anything with our scent on it. He loves to box with me and plays fetch, and loves to be chased, only to turn the tables and chase you. His Favorite toys are the cheapest around. He loves the plastic ring you take off of the milk gallon, straws and those shiny scrunchy balls.  Whenever I was getting 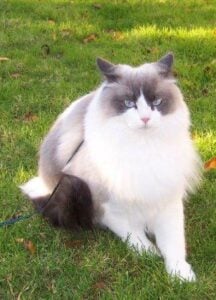 Louie on a leash and NOT liking it, but he looks so pretty in the green grass

sicker and sicker from the kidney failure, Louie would sense it days before I would and follow me around and sleep next to me on my pillow. When I was on dialysis, he would lay next to me in bed the entire time I was connected to the machine. He never left my side the entire night. He knew when I wasn’t feeling great and was there to comfort me, always.

I think he is the most beautiful cat I have ever seen! His eyes just melt my heart, which gets him extra treats! 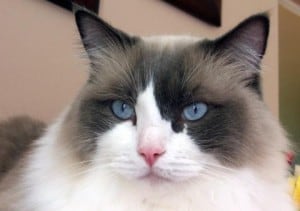 Do you have a Ragdoll cat?  Would you like for she or he to be featured on Floppycats.com like Louie?  Please read our guidelines for Ragdoll of the Week here and then feel free to contact us and submit your kitty's story and photos.