My dad HATED cats; growing up, there is nothing I wanted more – I had 3 “imaginary” cats, but much to my chagrin, we always had dogs. Plus birds, bunnies, fish, lizards, turtles….essentially, everything BUT cats!

I first heard of Ragdolls in my early teens; my mom worked as a Vet Tech and the clinic had taken on a retired breeder, “Bud” as their shop cat – he was a seal mitted, the most gorgeous cat I had ever seen! He had the typical Ragdoll personality – they let him roam the clinic and nothing got under his skin.

As soon as I turned 18, I adopted an orange medium-hair kitten; a Ragdoll was over my $25 budget. Amber Bock, a.k.a. “Fat Cat” was my constant while I grew up, moved around, and figured out who I was. It was painful to watch her deteriorate over the years; by 16 she started having seizures, and on July 4, 2012, she could no longer go on…..easily the WORST day of my life….. 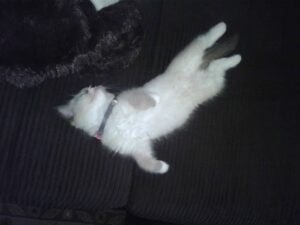 To distract me, my husband Nathan (who tolerated Fat Cat, but was not a cat-fan) started showing me photos of kittens. I knew I’d have a Ragdoll next, but no breeders in AZ had a litter of young kittens, just some older male cats. Nathan decided if I was going to have a girly, fluffy cat, he wanted a more manly cat – a Bengal. We put deposits on 1 of each, and started the arduous task of waiting for them to be ready to come home! We wanted them to grow up together, and hopefully come home nearly the same time. We read all we could on both breeds, kitten-proofing, etc – and I had found Floppycats and bought Jenny’s book, A Ragdoll Kitten Care Guide: Bringing Your Ragdoll Kitten Home– SO HELPFUL after not having a kitten for 17 years!

My seal mitted with a blaze girl flew from San Diego to Phoenix in August of 2012. It was the most anxious I had ever been; I hoped she liked me, and was everything I had dreamed she might be – I didn’t eat all day, just a wreck of nerves….her flight was delayed, re-routed….I spent all day tracking the flight. When I was finally able to claim her at 11PM, my heart just burst…! She was soooo tiny (8 wks) and soooo fluffy! 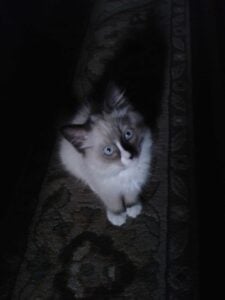 We had blocked off our kitchen and breakfast room as her ‘safe area’ and I set out a sleeping bag to stay with her. Fat Cat had cried all night when I brought her home; this kitten, not a peep. We let her come out on her own, and when I woke up, she was in the bedding with me! It took a day or so before we saw her eat, drink, use the litter box – a few panicked e-mails to Jenny and her breeder did occur – but she soon took over the house, checking out EVERYTHING, playing peek-a-boo, just an absolute joy of a kitten! I decided to name her “Lola” – it fit her personality, and whatever Lola wants, Lola gets! It was so hard to leave the house for any reason, and miss her antics! Fortunately at the time, I was self-employed and could work from home; not a lot got done the first few weeks she was with us!

It was 3 weeks later before we could pick up her Bengal sister, Selene – she was 9 wks when we got her, and she seemed much larger. We did the same “safe area” for Selene, but she took longer to adjust. Lola was so curious, it was difficult to keep her away! She KNEW there was a playmate on the other side! 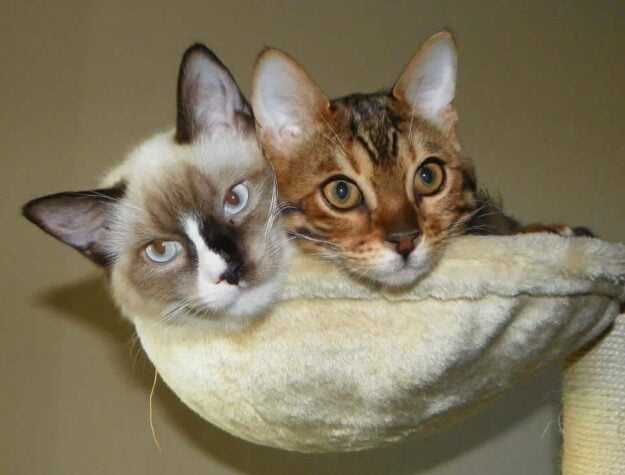 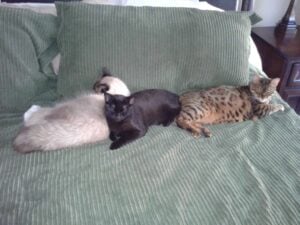 Once they were ready, we let them meet – and they were fast friends, chasing each other, wrestling, and enjoying the fruits of “Charlie’s 3rd Birthday Giveaway” that we were lucky enough to win!

The girls were so close, we started to wonder how devastating it would be when one passed; we also started to feel severe guilt for buying kittens, when so many are in shelters. Hearing about the plight of black cats in particular (least likely to be adopted/most likely euthanized) we searched one out. Wanting another female, we drove all over town on “Black Cat Adoption Day” 2013 but ended up falling for a male – “Shadow”. We safe-roomed him, and figured Selene would be excited, Lola indifferent. The opposite happened! Lola had to get to him, and Selene was pissy about him coming in. 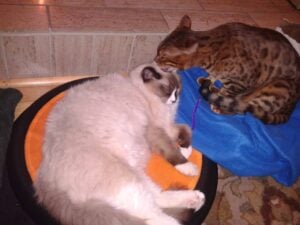 All 3 have such different personalities – Lola is a princess, she likes to cuddle and tolerates being picked up and carried; she DOES NOT meow, but occasionally chatters at birds or toys, and will growl at the other 2 if they gang up on her. Selene is neurotic; she’s afraid of everything but is the largest cat, and won’t let us pet her unless she comes to us when we are sitting or lying down, then wants to cuddle. She’ll meow like she’s being murdered if I don’t let her in the bathroom with me. Shadow is a mad man; he’s the alpha of the group and, like Selene, very vocal. He’s 2, but still in full kitten-mode. 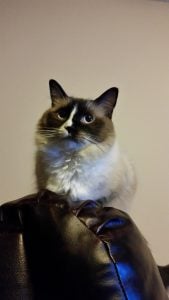 We had a new home built, moving in 2014, and we were concerned as it is 2 stories, with a 20’ great room. We safe-roomed them again; Lola hid under a sofa for a day. After that, they all really opened up and showed their personalities more! Perhaps not having smells of previous pets, more room to roam/hide, and a wider variety of outdoor critters to watch has made them happier. Lola will chase my husband up and down the stairs, or play by herself (usually at 4 AM) and sound like a herd of elephants upstairs. She loves to reach under closed doors – I can’t go to the restroom without seeing white mittens batting under the door. Lola also enjoys supervising baths; she will perch on the edge of the tub, and has only fallen in a few times – heh!

Lola’s favorite toys are any kind of box or scratcher, Yeowww! Catnip banana, and small, textured mice. She loves to get in the top basket of the cat tree; fortunately, she is NOT interested on getting up on the 2 story railing, unlike the other 2, both of which have fallen to the tile below at least once that we know of – heart attack inducing…!!! Her favorite place to hide is on my shoe rack in the closet – I ended up buying a new one for shoes, and gave her the fabric one that is like a cat-hammock. She’ll seemingly fall out of the cat tree upstairs and run like a maniac as soon as someone gets ice from the ice dispenser. 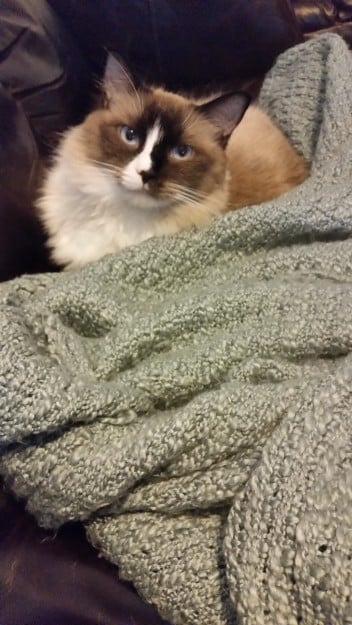 I know it’s un-motherly of me, but Lola is my favorite cat! I would have 20 ragdolls if someone would keep up on litterbox duty! 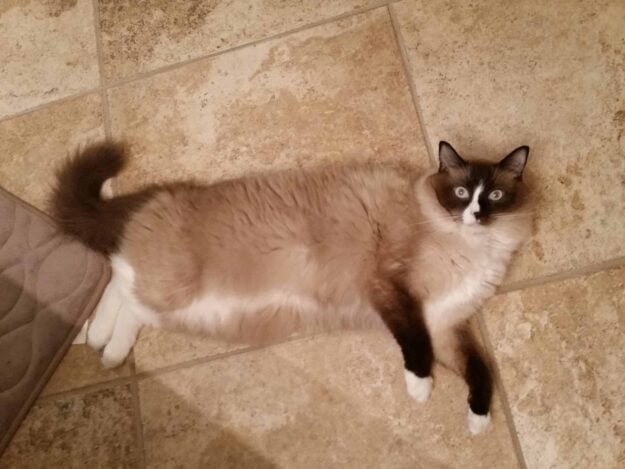 As for my cat-hating dad: My mom fostered an abandoned kitten in 2002; my dad wouldn’t let her adopt her out. Darby is now his lap-cat/baby! 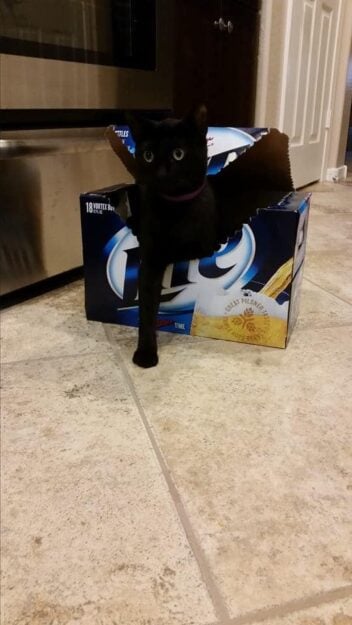