This is Lily.  I acquired her from a lady who was retiring from breeding Ragdolls.  She was renovating her home and getting ready for her wedding. And with 3 Dobermans, an African parrot, and four full grown Ragdolls in the house, she needed the break. She told me to get ready to fall in love when I first saw Lily, but nothing can really prepare you for that.  I fell hard.

Lily was a petite lady when I got her, and now at 21 months, she still weighs in at just under seven pounds.  Lily is a very content kitty. And will curl up and shut her eyes tightly when you hold her.  She is a quiet little girl; occasionally she will emit what can only be described as a squeak when she is excited, like when she gets a new toy.  Her gentle mature always melts hearts wherever she goes.  Upon visiting the vet a few months ago, the vet was almost reduced to tears, when Lily reached up and stroked her cheek with her paw.  It was truly touching! 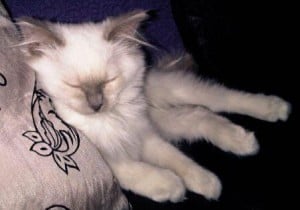 Her soft demeanour might lead you to believe that she is a pushover – not so!  Her ten month old brother, Leo, is now bigger in size and outweighs her.  In his juvenile enthusiasm to reach the food dishes he will attempt to eat out of one dish and block the other so he can “sample” it when he finishes.  In this instance, Lily will raise a paw and smack him back into reality.  Although half his size, her message gets across!  And she manages to never change that contented expression on her face when she reprimands him.

She also loves to play!  She fetches her tin foil ball for me, which is her favourite toy.  She also loves the “Cat’s Meow” toy, and her little honeysuckle stick.  (She doesn’t seem to enjoy catnip.)  I also have a fuzz snake on a stick that I got from the dollar store that causes her to squeak with delight when I bring it out for playtime.

Lily came into my life when I had been living alone for about six months.  I was researching various breeds 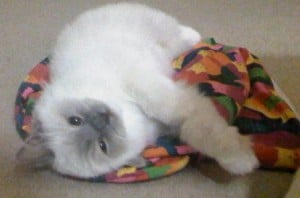 for a quite a while and kept coming back to the gentle nature of the Ragdolls.  I also live in a tiny space, and wanted a cat with a quiet disposition for that space (I loved having one Ragdoll so much, I got another one!) I now can’t imagine my life without Lily. When I was recently sidelined by a car accident, she was my constant companion, giving me reassuring nuzzles, especially when I was feeling low.  She’d also get up on my back and give me her own special “back rubs”, kneading gently until she was settled in. Lily rearranges the pillow on my couch to suit her when she’s resting – it’s adorable!  In my world, it’s Lily who owns my place – I just pay the rent! 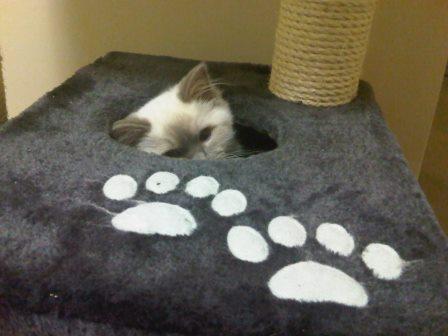 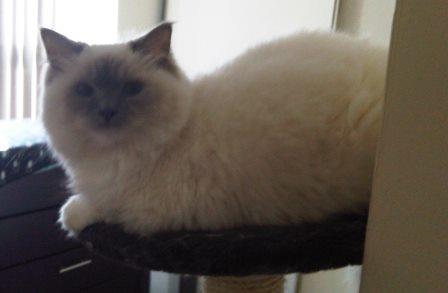 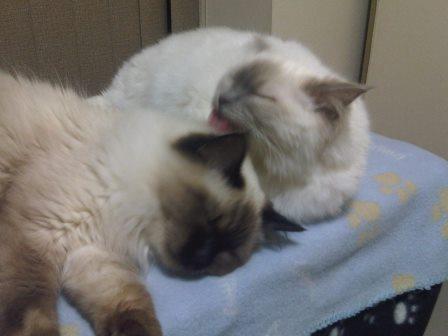