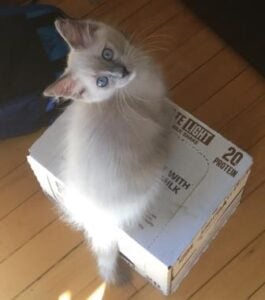 Our beloved domestic short haired calico kitty had just passed away after 19 years and we were not sure if we wanted to look for another cat right away. Both my wife and I thought it might be a good idea to wait a while before looking for another pet. A few weeks went by, and we proceeded to clean up the last remaining balls of dusty fur left behind from under the bed, behind the fridge, and all the little dark corners around the house that seem to collect dust kittens. But our house just wasn’t the same without the patter of little paws on our hardwood floors, and we both knew it. After a brief discussion, we decided that no – it was not really a good idea to wait too long before looking for a new kitty. Since we are both big fans of Jackson Galaxy and the My Cat From Hell TV shows, we watch a lot of animal planet. We had viewed most of the episodes of Cats 101 and began discussing the possibility of adopting a pure bred cat. My wife’s favorite breeds were the Scottish Folds and the Bengals, and mine were the British Shorthairs and the Norwegians. So we went on-line to YouTube and re-watched some of the CATS 101 episodes and happened to try the Ragdolls episode as part of our research. We both fell in love with the traits of the breed on display during the episode – seal pointed coloring, gentle, docile nature, loyalty and affection toward their owner, and the large size all appealed to us. Oh and those intense blue eyes went right through us – even from just the images on TV ! 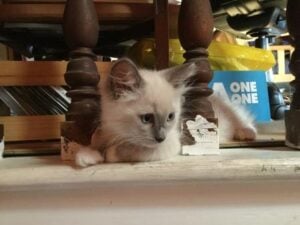 So we decided to try and find a Ragdoll breeder in the Rochester area. We found two good possibilities in our area – but there was a problem. Since it was now early May when we were looking, all the spring litters had already been sold ! Both breeders advertised new litters would be born soon; we were very disappointed that we would have to wait at least 3 months before we could bring a Ragdoll kitten home. We selected Pam’s Doll House in Spencerport and put down a deposit for a little girl from the next available litter. But that was not going to help us with our heavy hearts until September. I went back on-line and increased our search radius out from Rochester to include Syracuse and Buffalo. I found a couple more breeders, but they did not have any recent litters available either. I increased my search radius a little more, and found Ragdoll Ridge just a few miles outside Albany. They had a brand new litter of kittens with several girls and boys available ! We had already decided that we wanted two Ragdolls, so they could keep each other company while we were working. Ragdoll Ridge had a litter of 3 girls and one boy. We spent some time gazing fondly at the cute kitten pictures and really liked the little blue mitted boy from that litter. I called the breeder and placed a deposit for the male kitten and find out how long we would have to wait before we could bring him home. Ragdoll Ridge allows adopted kittens to go home after about two months instead of the usual three that many other breeders seem to follow, so that meant we could bring him home on July 1st. Since July 1 is my birthday, I could not think of more perfect birthday present than a playful, fluffy, Ragdoll kitten ! 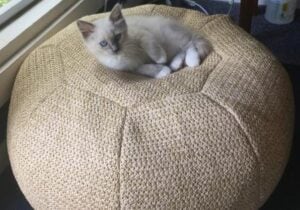 Now that we had found our little boy and knew we would be able to have him home by July 1 instead of having to wait until September, we got busy getting ready for a new kitten while we waited. We did lots of research on-line about Ragdoll cats, kittens, and kitten care. Of course while doing the Ragdoll research the Floppycats website popped up at the top of the google list so we checked it out right away. I found it to be very helpful and well organized, and then we started watching some of the Floppycats YouTube videos. We fell in love with Jenny’s cats Charlie and Trigg, and paid particular attention to Trigg who is also a Blue mitted Ragdoll just like our male would be.As the weeks went by, we kept a close eye on the Ragdoll Ridge website. When the breeder posted updated pictures of the litter our male came from we could start to see some of his color and personality coming out. We discussed what we should name him and decided he looked like a Leo to us. On the next call to the breeder to check on the kittens progress we told her what we wanted to name him and she loved it. She made sure her children who help raise and socialize the kittens called him Leo so he would get used to hearing his name. 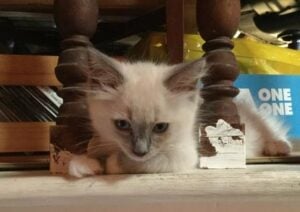 Now that he had a name we began sharing his baby pictures from the breeders website with all our family and friends. Everyone thought he was super cute and were very happy for us. To help pass the long weeks of June I busied myself with building two sturdy cat trees, purchasing cat toys, and researching the best food for a Ragdoll cat. Since I am a good handyman and enjoying building things I built my own cat trees using real tree limbs and cardboard concrete formers. We watched a LOT of Floppycats on you-tube and agreed with Jenny that dry food is BAD for kitties. We did more research and decided we would feed our cats raw. It seemed very appropriate to feed a carnivore like a cat raw food. We settled on two brands of raw food to try out on our new kitten – Radcat and Stella and Chewies.At last the Friday before July 1 arrived and we prepared for the long 3 hour drive to Ragdoll Ridge the next day. I didn’t think I would be able to sleep that night but soon it was morning on July 1st and it was off down the NYS Thruway to Albany. We arrived right on time at Ragdoll Ridge and when we pulled into the driveway there was little Leo looking back at us from the breeders daughters arms. He was adorable ! After introductions all around the breeder showed us around her house, and took us upstairs to the Queens room to show us her queens and a brand new litter that had been born after Leos in June. After settling up on the remainder of our adoption fee we thanked her and her children for raising such a cute little boy and waved goodbye as we headed back to Rochester. Leo was very well behaved and slept in his carrier most of the way home. 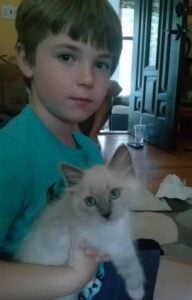 Arriving home we brought Leo inside and placed his carrier on the living room floor. Now he awake and bright eyed and ready to come out and see his new home. We unzipped the front door on the carrier and he walked right out with no hesitation. He began exploring the living room immediately and showed no signs of timidity or fear. We were delighted that he felt comfortable enough to explore our home and made sure he found his food dish, water dish, and his litter box in the bathroom during his first tour of the first floor. We had closed off our sun porch and the second floor to limit his range for the first few days. Leo’s first day was filled with exploring, playtime with a myriad of toys we had purchased while waiting, and short naps under our coffee table. On his first night he bounded up on the bed with us and flopped himself down almost under my chin while purring loudly. The breeders children make it a habit of taking kittens to bed with them so he wanted to sleep with us on the very first night. Since I had provided a big blanket chest covered in area rug grippy rubber matting at the foot of our bed he had no problems getting up and down. It was almost magical to have his soft furry body tucked against my chest and I fell asleep with the sound of purring in my ears.Leo is now past his second week with us and is growing fast ! His color is starting to come in stronger now with a gorgeous light cream striping along his flanks and legs. After rejecting a few of the raw foods we tried with him we found he wolfs down anything with chicken or 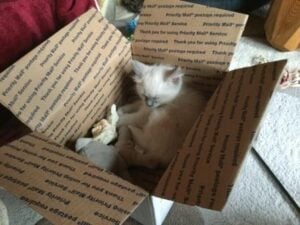 turkey flavored meat. After his first visit with our vet, we were advised against raw foods due to the common occurrences of contamination. Based on our vet’s advice, we currently are feeding him Lotus brand chicken and turkey flavored wet foods mixed with a small amount of Blue Buffalo kitten formula dry kibble. We plan on slowly weaning out the dry kibble over the next few months. He delights all our friends and family who come to visit and we are having lots of fun posting pictures and video of him on Facebook and you-tube. We still love watching Floppycats product reviews and have purchased the full set of Pawnosh cat bowls, the Cat geeks cat cave, and the Petcube based on Jenny’s reviews.But the best part of our whole adventure is its not over yet ! Our female Ragdoll – who we have already named Chloe – is due to come home with us from Pam's Dollhouse locally on Sep 1st ! Chloe will be a fully seal pointed female with a blaze on her nose. We cant wait to see how much she will grow up to look like Charlie ! We would really like to extend our thanks and appreciation to Floppycats for all the great advice, entertainment, and helpful product reviews that Jenny provides to Ragdoll owners and cat owners in general. It really is the best place to go if you have a Ragdoll to find out how to care for them, love them, and show the world how awesome they are. Thanks Jenny !Joel and Tammy Schmid Proud parents of Leo and soon ChloeRagdoll Kitten or Cat?  Consider submitting your kitty!  Ragdoll of the Week submission guidelinesSee more Ragdoll Kitten of the Month submissions here!