In August 2003, my beloved Ragdoll, Melville, died after a long series of illnesses. Because he was such a sweet temperament cat, we decided to get another purebred Ragdoll. We located a breeder in South Jersey who had a couple of litters and gave her a call, telling her we wanted one Ragdoll kitten. 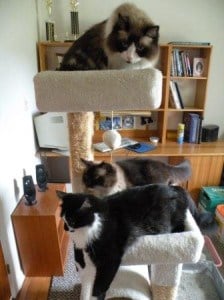 Given that we already had two rescued cats and one purebred Maine Coon, the idea of adding more than one cat to our household didn’t seem like a great idea. When I called the breeder, she recommended two kittens. Our other cats were fairly old and she said that the kitten really would like a second kitten to play with. So, we drove to south jersey to pick out a pair of kittens.

When I had gotten my first Ragdoll, around 1990, they were a fairly rare breed and it was hard to find a kitten.

By 2003, they were more common and the breeder had quite a few to chose from. We opted for a pair of outgoing male brothers. Not having had a kitten for a long time, I couldn’t believe how small they were. However, we were not going to get away that easily. Just after the breeder put pink nail polish on a paw of each kitten so we could identify them when we came back to pick them up, a small female meowed her way over to my significant other. Right from the start, it was clear she was neurotic.

The breeder said she’d be a hard one to place and offered to let us have her at a discount rather than one of the boys. My significant other said he wanted all three. So, over the course of a couple of days, we went to thinking we’d have a house of 4 cats to one with 6 cats.

The breeder seemed incredibly relieved that we were going to take the neurotic female.

Less than 2 months later we picked up all three cats. Because I am a huge coffee fan, we named them Latte, Mocha, and Java. The female became Mocha and the boys Latte and Java.

Java and Mocha Sleeping Together

We put them in their own room to separate them from the others but my Maine Coon, who missed her Ragdoll buddy, immediately hopped over the barricade, decided that the new cats were her buddies, and curled up with them. 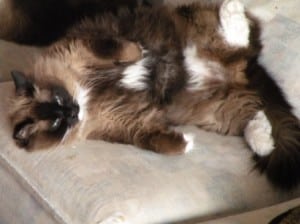 These three, including the neurotic one, have become a real source of joy to me. Shortly after we adopted them, we learned that my significant other had a massive brain tumor. The cats were my comfort throughout his surgery and afterwards. While he was in rehab, I’d bring one at a time to visit him and they’d lie next to him purring. Given that they never stayed anywhere for very long, their behavior was indicative of their understanding of his condition. 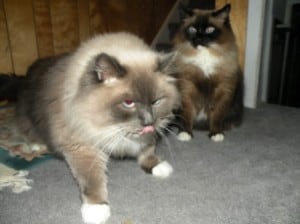 My three Ragdoll “babies” are now almost 7 years old and have been joined by 3 rescue cats that occasionally torment them but mostly just hang out with them.