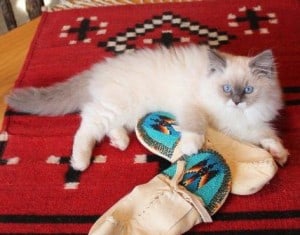 My Ragdoll kitten, Kelchi, was born on October 7, 2012 and is now eight-months-old.  Kelchi joined my pet family, a one hundred plus pound Shiloh Shepherd named Colter and my mixed tabby cat, Moshie, right after Christmas.  Since I love Native American history and collect artifacts and artwork from those cultures, I decided to give my kitten a Native American name.  Kelchi means “moccasins” in the Navajo language.  The name is pronounced KELL-chee.  As you can see from her pictures, she has little white moccasins on her feet. 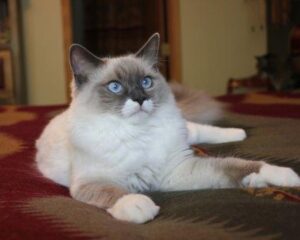 When I decided to get a second cat, I started looking for Maine Coon breeders in my area.  I was familiar with that breed because a Shiloh friend of mine out east is a breeder.  (I am from Minnesota, so she was too far away for me to get a kitten from her.)  I liked the looks of that breed, as well as their friendly, doglike personality.  Somehow in my Google search for Maine Coon breeders, I stumbled upon the Ragdoll breed.  I had never heard of Ragdolls and became intrigued.   Thus, a new Google search began.

As I researched the Ragdoll breed, I was very much taken by their striking beauty, large size, and friendly personality.  I also liked the idea that their coats don’t typically mat and don’t require a lot of maintenance.  Then there were the eyes… I absolutely fell in love with those BEAUTIFUL BLUE EYES!  I was sold on Ragdolls without ever seeing one 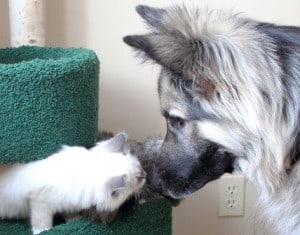 in person.  I found Gail Vettel of Angelkissed Ragdolls.  Gail resides near North Branch, Minnesota which is a little over two hours from me.  Angelkissed is a small cattery.  Gail’s cats are all part of her household.  Those two factors were important to me as I was looking for a breeder, along with the usual health and genetics issues.  I would highly recommend Gail.  She has been great to work with as a breeder and produces awesome kittens.  Kelchi is so beautiful and has such a sweet temperament.  I would get another cat from Gail anytime!

I planned to introduce Kelchi to my other two pets in a slow, methodical way.  I started Kelchi out in a room by herself, with the door closed, so she and my other animals could only smell and hear each other.  Colter was very intrigued by this new mystery.  My older cat pretty much ignored the whole thing and went about his usual naptimes.  The first day, 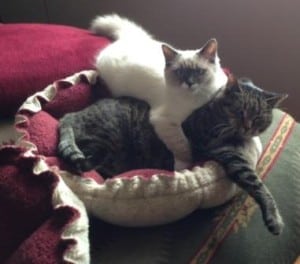 I sat on the floor in the room and let Kelchi get to know me on her own terms.  Within the hour she was on my lap and happily exploring the room.  I thought she would be in that room for a number of days.  However, after 24 hours of a closed door introduction to the others, I could see that Kelchi was ready for the next step.  So, I put up a child gate and opened the door.  Again, Kelchi moved up my time table.  By that evening, she was climbing the gate to see my very curious Shiloh Shepherd who sat on the other side.  And so, the friendship began!

Kelchi and Colter have become best of friends.  Colter has always been very gentle with her.  Kelchi thinks Colter is her own personal warming bed, as well as her best friend.   They cuddle together.  They play together.  The two of them are always waiting to greet me at the door when I come home.  I have a number of YouTube videos of Kelchi and Colter 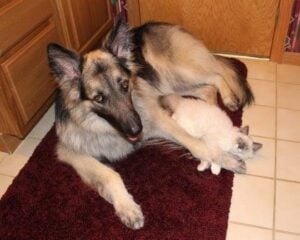 together.  You can find them on my channel.  I also wrote a storybook for my first graders (I am an elementary school teacher) about Kelchi and Colter meeting.  It is called, “Kelchi Finds a Friend.”  You can find an audio-visual version of this book on my YouTube channel as well.

Kelchi and my other cat are getting along well also.  Moshie has gotten more active since she’s been here – which is a good thing!  Kelchi is definitely part of the family now, and truly “owns” my house.  She has become quite the acrobat (or should I say “acro-cat!”), climbing high up on the tops of walls and stair railings.  She is pretty much fearless.  Owning this sweet, friendly, intelligent, and beautiful kitten has definitely turned me into a Ragdoll fan.  After having her, a Ragdoll is now my cat of choice! 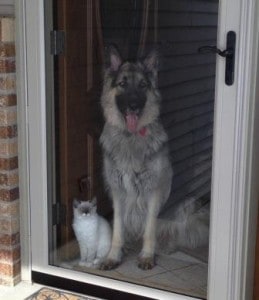 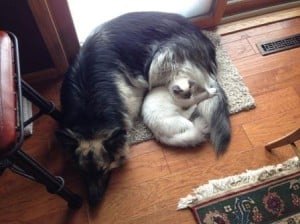 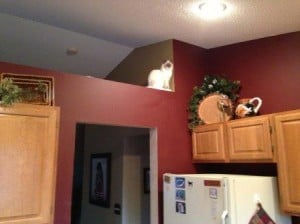