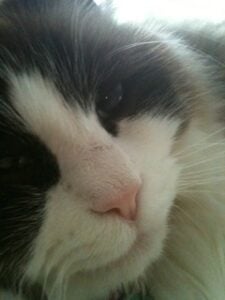 I first began my research for my very first cat in 2008 and what a journey it has been. I looked at all breeds from Savannahs to Siberians, but eventually I fell in love with the Egyptian Mau. What was I thinking?! I had just located an Egyptian Mau breeder in my area and was going to email them when I decided to do a last minute breed search. That is when I found the Ragdoll. I quickly located a breeder in my area; Bonnie at Ragtime Blues Ragdolls. She was the one that made my experience so wonderful. I contacted her and it just so happened that she was coming into my area the next weekend with her kittens to visit another potential kitten parent and she said she could stop by my place on her way back home. I was not expecting the kitten mayhem that came to my house with her. Imagine 10+ little ragdoll kittens in your living room running around while you tried to pick out the 'perfect one'. I do not know what I 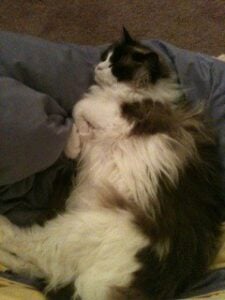 was thinking when I picked out my baby Jazmin. I should have gone with one of the more mellow males, but instead I decided to pick out this stubborn, curious, and slightly air-headed seal bicolor female. I certainly do not regret getting her though as she has provided me with much laughter over the years. Within the first two weeks of having Jazmin she got stuck behind the refrigerator, got her head caught in a hamster ball, and fell into the toilet. Twice. Now that she is almost five though, she has mellowed out and is way to big to fit in those small spaces.

Even though Jazmin has her moments, no one can dispute that she is an intelligent cat. She is an indoor cat only so I decided to teach her how to walk on a leash. 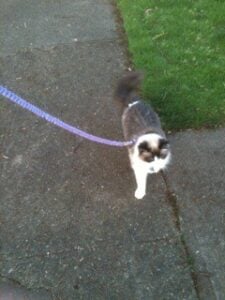 She loves walking around the neighborhood and seeing her boyfriend George, the ginger tabby that likes to live on the edge. Aside from her leash walking endeavors, Jazmin had conditioned me to accept the fact that she will never drink out of a plain old water dish. If someone ever left a glass of water sitting around without supervision, Jazmin would come drink out of it and then proceed to knock it over with her paw once she was done. To keep water spillage to a minimum around the house, I just decided to give in to her horrendous habit of drinking out of the kitchen sink. So much for no cats in the kitchen. If there were no water glasses laying around and I refused to turn on the tap for her, Jazmin then would proceed to the toilet bowl. I guess she never learned from her kitten experiences that there is no 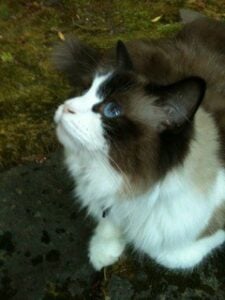 traction on a toilet seat and that the inside is actually wet. I dealt with her drinking habits until I found her Drinkwell water fountain. That thing is absolutely amazing and I think Jazmin would have driven me insane by now if it weren't for her Drinkwell.

Of course water isn't the only thing edible Jazmin is obsessed with. Her true and undying passion is food. She loves food so much that she has actually become a reliable alarm clock in the morning. She will sit on my bed and meow in my ear every single morning at 7 o'clock on the dot. The only unfortunate thing about this method though is that I cannot turn it off on the weekends. She is a complete glutton. She will scream at me at dinner time to remind me to feed her because for 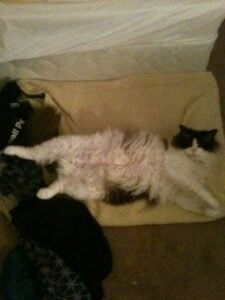 some reason she thinks that she will starve if she does not remind me to put down her food. If the meowing at meal times isn't bad enough, 15 minutes after she has eaten dinner, she will usually sit in the kitchen and wail pitifully as if she hasn't eaten in days. Jazmin will also eat anything that even seems slightly edible. She once jumped up on a shelf and took a thumbtack out of the wall with her mouth. If I had not been there, she would definitely have swallowed it.

I love Jazmin and it is mainly for her sweet temperament and her wonderful fur. Unfortunately though, Jazmin got terrible fleas one summer, so I decided to shave her. While on the phone setting up an appointment with the groomer, she asked me if Jazmin did fine while being 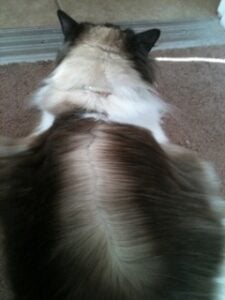 handled. Jazmin had never been professionally groomed before, but since she is a perfect angel and would never hurt a fly, I told the groomer that she wished all her clients were as well behaved as Jazmin. Boy was I wrong. When I picked Jazmin up, she looked beautiful in her lion cut but I could tell she was ashamed of her lack of fur. When I asked the groomer if Jazmin was on her best behavior, she gave me this disgusted look. She asked me if I thought it was funny to say that Jazmin was well behaved when in fact she was probably the most ill behaved cat she had ever groomed in her 15 years. The groomer said she actually had to put boots on Jazmin's paws to prevent her from scratching and put two muzzles on her because just one didn't work. Of course I was completely astounded at this dark side of Jazmin 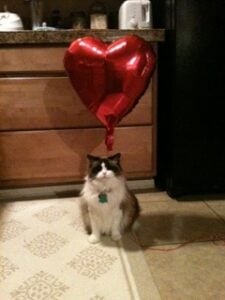 and have never gotten her groomed again.

Jazmin definitely has her quirks, but she is so sweet. I love her lumbering stride and her total lack of coordination that make her so amusing to watch. I love her way with words that make you want to give her all the chicken in the world, but most of all, I love her for the beautiful cat that she is. This may make me seem like a crazy cat lady (which I'm not) but Jazmin really is my best friend and I honestly don't know what I would do without her. 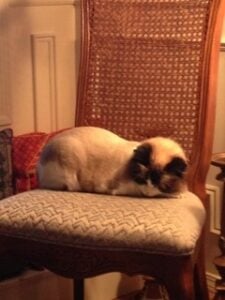