If there is one moment that any cat owner despises, that’s cleaning the cat’s litter box. You can use the best of kitty litter and buy the best litter boxes that pet shops have to offer, the cleaning part remains a chore any way you put it. You have to scoop out the fecal matter from the litter, as well as the used litter, which is packed with the pungent smell of urine. Then, you have to bag the kitty litter waste and throw it out. This will never be a pleasant process, but the right tools do make the process easier.

But what if cleaning the cat’s litter box could be as simple as flushing the litter waste away? What if it could all go away with the press of a button? Flushable kitty litter sounds like a blessing for cat owners anywhere. In fact, they should recall regular kitty litter altogether, so we can all switch to the flushable kind, right?

But let’s find out more about flushable kitty litter, how it’s different from regular kitty litter, and what happens to it when you flush it. What Is Flushable Kitty Litter?

Regular kitty litter, both clumping and non-clumping is clay-based. There is also the silica-based variety. None of these are safe to flush away in the toilet, and certainly not septic tanks. When clay-based litters come into contact with water, they harden and form a cement-like structure, and if this happens inside your pipes or tank, then you will be in dire need of a plumber. 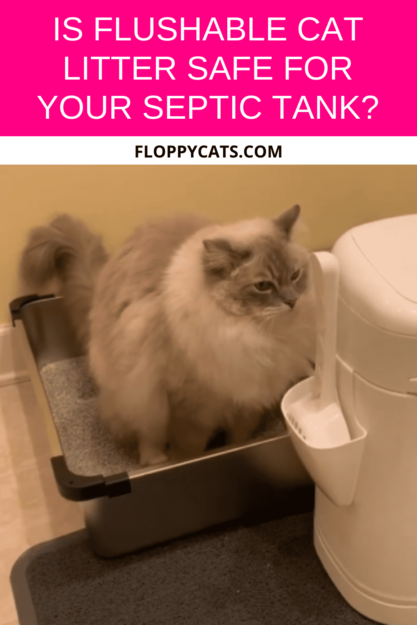 Regular kitty litter, both clumping and non-clumping is clay-based. There is also the silica-based variety. None of these are safe to flush away in the toilet, and certainly not septic tanks. Click To Tweet

Flushable kitty litter, on the other hand, is made entirely out of biodegradable materials. Some products are made using a single material, but there are others that include a combination of materials. Here are some of the materials used: As Easy as Flushing the Litter Away…Well, Not Quite

If you’re visualizing how flushable kitty litter would work in your home, you’re most likely thinking about how you could scoop all the dirty litter, throw it in a can and then flush it all away with the push of a button, right?

Well, this is almost true. The dirty kitty litter does go away, but it takes a few more pushes than you’ve expected initially. Flushable kitty litter manufacturers instruct to flush the toilet after each scoop. This is intended as a means of keeping your plumbing system safe. Flushing it scoop by scoop helps prevent clogging.

And that’s not all.

According to plumbing specialist Mike Agugliaro, “Today’s water-saving toilets use only 1.6 gallons of water per flush. That’s not enough water to keep the kitty litter moving.”, he told Today.com. Moreover, he says that the dried poop in the litter box is a danger in itself.

As we all know, cat poop becomes very hard after it stays in the litter. When these “petrified poops”, as Mr. Agugliaro called them, are flushed in the toilet, they can get lodged in the labyrinth of pipes and cause clogs. Yes, flushable kitty litter is the eco-friendly alternative to traditional kitty litter, which is not at all good for the environment. It is made out of biodegradable materials and flushing it down the toilet means that you don’t have to use plastic bags to dispose of it in the trash.

While it might seem that at least from an ecological standpoint flushable kitty litter is the better choice, according to Treehugger.com, the issue is far more complicated that it might seem initially. Up until the biodegradable litter is flushed, everything is ok, but the flushing is just the beginning.

When you flush the kitty litter and the kitty waste, you also introduce a new type of waste in the waterways. The Environmental Protection Agency considers pet waste a pollutant. “ These pollutants can harm fish and wildlife populations, kill native vegetation, foul drinking water, and make recreational areas unsafe and unpleasant.”, says EPA.

A major concern surrounding the introduction of cat fecal matter in the waterways is the spread of Toxoplasma gondii, a parasite for which the cat is the definitive host.

Cats become infected with the parasite when they eat meat that is contaminated with the parasite or hunt small mammals or rodents that carry Toxoplasma. The parasite then reproduces inside the cat and when the cat defecates, it eliminates oocytes with the fecal matter. If this is introduced in the waterways, it can take the oocytes into the environment.

The intermediary hosts of Toxoplasma gondii include a wide range of mammals and rodents (including humans). They become contaminated when they ingest soil, water, and plant material contaminated with oocytes. Find out more about the life cycle and the means of transmission for Toxoplasma from the CDC website or watch this video if you want to go into more detail.

Only a very small part of house cats are contaminated with this parasite because the vast majority of them are not exposed to it. House cats don’t usually hunt so they can’t eat the intermediary hosts of Toxoplasma. Cats that spend time outdoors, on the other hand, do have the chance to hunt mice or small birds, which could be carrying the parasite.

Toxoplasmosis is dangerous for humans because it could lead to severe ocular disease. It is especially dangerous for pregnant women because if they get contaminated during the pregnancy, the toxoplasmosis will also be transmitted to the infant. The potential results are a miscarriage, a stillborn child, or a child born with congenital toxoplasmosis, which is extremely severe.

Aside from Toxoplasma gondii, cat poop may also carry a multitude of other parasites and bacteria into the waterways. The main issue is that the purification system is equipped to clear the typical pathogens found in human fecal waste, not pet waste as well. So flushing kitty litter is not safe for your pipes, your septic tank, or the environment.

The Safe Way to Use Flushable Kitty Litter

Yes, there are still pros to using flushable kitty litter. It can’t damage your piper or your septic tank if you don’t actually flush it. It also won’t spread a new batch of pathogens into the waterway if you use it as a regular kitty litter.

By replacing your clay and silica-based litter with the biodegradable kitty litter, you are making a difference for the environment. Remember to use biodegradable bags when you dispose of it, though.

By replacing your clay and silica-based litter with the biodegradable kitty litter, you are making a difference for the environment. Click To Tweet 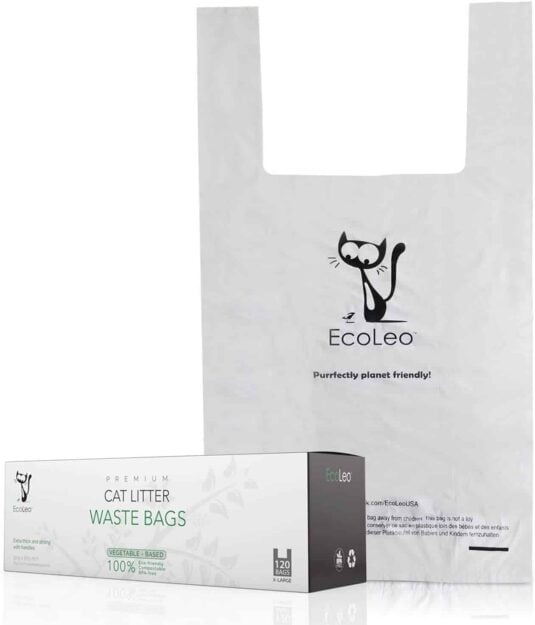 Aside from the danger it poses to your septic tank and pipes and the environment (if you actually flush it), using flushable kitty litter comes with a few more cons which you should be aware of:

The price difference between flushable kitty litter and the regular kind might be reason enough to make some cat owners reconsider making the change.

Most flushable kitty litter products do not clump at all, which makes them more difficult to clean, but even those that do clump are not as efficient as regular clumping kitty litter.

Corn and wheat are common allergens for cats as well as people. Don’t use flushable kitty litter made from corn or wheat if the cat or any member of the family is allergic to these.

To sum up, flushable kitty litter is made out of biodegradable materials like corn, wheat, wood, and paper, as opposed to the traditional clay and silica-based products. Flushing it, however, is not safe for your pipes and septic tank because they might not be using enough water to wash the litter away.

Moreover, the dehydrated cat poop can cause clogs all on its own. It is also not safe for the environment because the waterway purification systems are not equipped to deal with pathogens in cat feces. Flushable kitty litter remains a worthy option, though, if you don’t actually flush it, which might seem counterintuitive, but is the safest way to use this type of kitty litter altogether.

What do you think about flushable kitty litter? Have you ever tried to use it? How did your cat respond to it? Tell us all about it in the comments section below.

2 thoughts on “Is Flushable Cat Litter Safe For Your Septic Tank?”