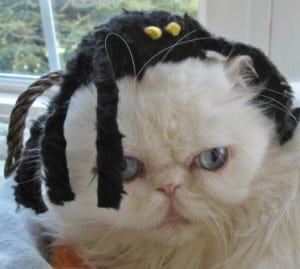 Interview with Marcia from Just Cats Boutique on Etsy

Most people who know me, know that I Love  to Create, LOVE CATS and I have a Lot of Fabric! I have been sewing and creating since childhood, and my first actual sewing project was a flannel nightgown at the age of 8! From that point on I was hooked on creating, and had wanted to pursue a carreer in Pattern and Clothing Design. However, for practical purposes I am an RN by occupation. A permanent injury to my shoulder prevented me from returning to my 27 year career as a Hospital RN, and School Nurse. Two children, and a “few” Kitties later, and I am now “Sewing for Cats” and playing with my creative side that was put away for many years! I am the slave to three Purrfect Persians, Donny the great White age 12, Rudy the Floppy Blue Himalayan age 10 and his litter mate Phoebe the Cream and tiny Princess, age 10!

1. How did you get interested in cats? How old were you when you had your first kitty?

I have always loved cats, and can remember always having a cat from the age of 5 yrs old- our first cat was a black cat named “Licorice”. Sadly, my parents let him out at nite and he was hit by a car. I have always been an animal lover, but Cats are my passion. I am an “Indoors Only Cat” Advocate!

Sometimes an idea for something will just pop into my mind and I have to create it. One day while I was sewing a Kitty Blanket, I saw a scrap of fabric that I envisioned would make the perfect mouse pattern. I begin by an idea, then try to create my mind’s picture. Then comes making a pattern, finding the fabric that goes with the idea (I drive myself crazy trying to find the fabric I want to work with). Lastly, I sew the item and my Kitties “test” it for durability and practicality. I want my items to appeal to the Kitty but also be appealing to the Kitty Human. I didn’t want to make Catnip Mice that were only functional and decided to make them a little different from the ones I had seen. ‘Boutique Mice” were born.

The first was a “Pirate Mouse” that I later named Jack. I have many ideas, but can’t always find the time to create them! But, all my Kitty tested items have to be safe for Kitties, and I do not use strings or bells on the outside that the Kitty may ingest, or button eyes,or anything that is glued on! The eyes and noses on my mice are sewn by machine embroidery free hand.

3. How did you discover Etsy?

Well I discovered Etsy on the Internet, but didn’t consider it until my husband was at PetSmart buying their stock of “Cosmic Catnip” for me. The cashier asked him what he was planning on doing with “All That Catnip”? He told her I make little Catnip Mice and she suggested I try selling on Etsy. I didn’t do it at first, but then decided to explore it for myself!

Did you consider other ways to sell your products?

Originally I was giving away all the items I made  to Cat Rescues,but it was getting too expensive, and to help defray the cost of the fabrics and catnip I was using, I was looking for a way to sell some items so I could continue to donate to the Homeless Kitties.

4. Do you sell your products in a local store in your area?

“Have you ever walked into a "Pet Boutique" only to find the "Cat Section" in a small corner in the back? " I originally did sell my products in a local Pet Gift Shop,and I adopted that motto, because his store, like every store I have visited that was for “Cats” and “Dogs” has a tiny corner for the Cat Items. He promised me a larger area, but my things were so hidden, it was upsetting, and I decided I would rather have more control over my items and how they are displayed, so I turned to Etsy. Hence the “No Dogs allowed” on my banner! I wanted a place for “Just Cats”, and not to have to be sharing with Dogs, not that I have any dislike of Dogs, but they are well served!!

5. Have you been successful at selling your products on Etsy? Have you always been successful, or did you end up getting a lot more traffic after being featured on a specific blog?

I was successful my first try at selling my signature item “Boutique Mice”. I have not branched out to many other items that I would like create and sell, but hope to at some point. I had my shop closed for a year due to illness. I plan to open a “Just Cats Boutique 2” for Kitty themed items for Kitty Humans, in the future!

6. Do your customers ever give you new ideas for products?

I haven’t had any customers give me ideas for the current products, but I would welcome them should they want to come forth!

7. Have you thought of featuring a Ragdoll cat is some way? (Had to ask.)

Well, I have a very Floppy Cat, and his name is Rudy! He is a Blue Himalayan, and if there ever was a Floppier Cat, I would be surprised! He has been one of my Cat Models, and he is the main Toy Tester! He LOVES to play by himself and loves my catnip toys!! He is the kind of cat that just melts the minute you touch him and he goes LIMP when you pick him up! Which isn’t always a good thing, as he is not a tiny Kitty like his litter mate and sister Phoebe, who is half his size!! He is quite the “Big Boy” and when he goes limp in your arms he is an armful, as I am not a large person!!

I am a one woman show when it comes to my creations and sewing. I do have three resident Persian “Kitty Helpers” Donny the Great White Persian, Rudy the Blue Himalayan, and Phoebe the tiny Cream Persian, are my staff. Donny is a very loving and deaf kitty who needs to be with me where ever I am and he keeps me company while I sew. Rudy and Pheobe love to play and test out new ideas!Phoebe comes running the minute she hears the camera, because she thinks I have a new item for her to pose with, and test out! Rudy just loves to throw around catnip toys! My daughter designed my Shop logo, and my website, and frequently my husband will make a post office run for me.

10. Do you do custom ordering? Can someone return it if they don't care for it?

I have done some custom orders, and am happy to alter sizes and colors, and duplicate of any of my items, material permitting. I would certainly allow a return, as I aim to make the Kitty Happy! If Kitty isn’t Happy, then I should not be in business!

11. Can you share a story with us behind any of your products that you especially enjoyed working on? Maybe because of the story behind the kitty?

The Kitty that started my business is named “Lilah”.She was a gray feral that seemed to connect with me, and was roaming my neighborhood.I began feeding her, and I would see her looking at me thru the windows. “Lilah” is responsible for me turning my talents and passion for Sewing and Kitties into a way of both helping Kitties and starting a small Busniness of creating Cat Toys and Cat Accessories. I started out sewing a large Pink Kitty Bed, (it was a good size) and 10 Kitten Blankets for Lilah during the weeks I tried to trap her, pregnant, and ready to deliver her second litter of kittens. Since trapping her four kittens from a previous litter months before, I had found a Cat Rescue willing to help me with her. The first four kittens got good homes (and blankets).  My sister has one named “Charlie” and the other 3 were vetted and adopted out by a nice veterianrian in the area.

Months later, after many weeks of untiring attempts to finally trap her, I sent the Kitty Bed and blankets with Lilah to a foster home and she delivered her kittens in the bed! It was the first soft thing she had slept on and I was told she loved it! The foster Mom had to pry the bed from her to wash it after she gave birth in it to her 6 kittens! It gave me such a good feeling to know my items made a difference in this poor Kitty’s life. I began sewing many, many Kitty beds, blankets and then toys for the Cat Rescue. She is the reason I am sewing Kitty items and will never forget her. I do still donate items to Kitty Rescues, the most recent is Animal Haven Shelter, in NYC. Any small profits I make from my shop are turned back into supplies so I can donate items.