Morgan the Pirate Gato arrived in CT in January 2002 as a special “vision impaired kitten” from Save A Sato in San Juan.  His original foster Mom was concerned about his odd eating habits, and inability to gain weight.

Unfortunately, she took him to Vet who saw him as her retirement golden egg.  She ran up a huge vet bill that the local shelter would not approve.  Daily calls with her created huge concerns as to what was going on with Morgan.  When she called and said they had decided he was diabetic and gave her insulin – I asked her to return it and picked him up that night.

Being the only Save A Sato volunteer in CT, the choices were me – or a plane back to San Juan for Morgan.

I spent a week monitoring him closely, calling all my Vet friends, faxing out his tests, researching the net  and trying to get some answers.  A close friend recommended a local Vet who only worked on cats, and I decided to give it a shot.  Meeting Dr. Nero changed Morgan’s life, along with my other cats.  He was not only kind and caring, but he also understood the expense challenges, and the fear of Morgan’s prognosis.  He is the ONLY known kitten to have survived being born with diabetes and cataracts. I became Morgan’s permanent Foster Mom.

Each step with Morgan was a celebration. Every pound gained, his levels regulating, being strong enough to be neutered.  Then it was time to consider the cataracts.  When Morgan turned a year old, Dr Nero and I agreed it was time to contact Cornell.  A newspaper article was done, and donations came in to cover his expenses.  That was also when Morgan’s Beds was created.  My way to help pay for Morgan’s surgery and to cover his on-going expenses.

Morgan had his surgery at Cornell, the following January.  He had his cataracts removed, and had two replacements lenses done by Dr Matthew Landry who is now in Seattle, Wa.

Morgan will always have odd medical issues, unknown infections, and he will have the diabetes all of his life.  His insulin alone is $90.00 per bottle, he has daily supplements, and eats 4 cans of Fancy Feast a day.

Every penny of the bed profits goes to pay for Morgan.  I average $10.00 a bed after buying the fabric and polyfill, so it’s 9 beds for one bottle of insulin, 2 beds for a box of syringes, 2 beds for a bottle of supplements.  I will also sometimes donate a bed, or raffle a bed to help another animal in need.

Morgan’s a happy go lucky little cat who has no idea he’s not purrfect.

All answers are copyright of Donna Lenz.

1. How did you get interested in cats?  How old were you when you had your first kitty?

I got my first cat when I was about 6, walking home from school an older boy said “Hey little girl do you want a kitten ?” and he handed me an orange tiger.  Sadly, we only had him about 2 years.

When I moved into my first apartment, my then boyfriend, now husband said I needed a pet, and took me to adopt a kitten.  Nikki spent 13 years with us, and turned us both into huge cat lovers.  We currently have 5 cats, along with 2 dogs, 4 guinea pigs, 4 rats and 2 prairie dogs. 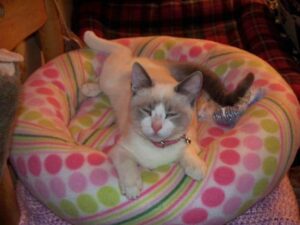 2. How did you discover Etsy?  Did you consider other ways to sell your products?

I originally sold the beds by word of mouth, and after a newspaper story on Morgan the Pirate Gato the word spread.  One of my friends mentioned Etsy, and when I looked into it I really liked it. Very user friendly, very reasonable prices, and great overall crafting community.

3. Do you sell your products in a local store in your area?

I have sold the Cat Beds at my Vet’s Office a few times, and all the money went right into Morgan’s Account there. 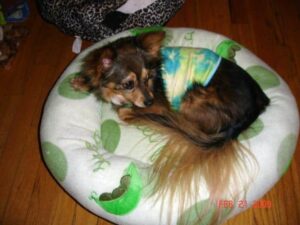 4. Have you been successful at selling your products on Etsy?  Have you always been successful, or did you end up getting a lot more traffic after being featured on a specific blog?

I’ve done pretty well on Etsy, the beds have been successful based on word of mouth from my customers. The most traffic I have ever had was after I did a Morgan’s Bed giveaway on ModernCat.  It was my best sales ever.

5. Do your customers ever give you new ideas for products?

My customers give me ideas for fabrics, but the bed designs are really all mine.

6. Have you thought of featuring a Ragdoll cat is some way?  (Had to ask.)

I have several Ragdoll customers, and they are Morgan’s Beds models in the listing. Their laidback personalities led me to fall in love with them, and I ended up adopting a Siamese Mix Gato in early December from www.saveasato.org  Willow has the same laid back personality, even though she ended up being shorthair, and she is a mix. I’m also the Shelter/Flight coordinator for Save A Sato.  My dogs and Morgan are also from there.

I do http://morganthepirategato.blogspot.com/ unfortunately I don’t spend enough time on it.  I’m currently the guest blogger for Kaytee Pets.

9. Do you do custom ordering?

Yes, and I’ve done custom sizes,along with custom designs.  Can someone return it if they don’t care for it? I’ve only had one problem with a custom dog bed order.  The customer did not consider the sizes until the beds arrived.  They were too small for her dog.  There was no question on taking them back.

Other than that, some of the beds are now 4/5 years old and are still like new.  I still have my own original dog beds which were the first I ever made.  I really am careful to buy only good fleece that will stand up to many washings.

10. Can you share a story with us behind any of your products that you especially enjoyed working on?  Maybe because of the story behind the kitty?

I enjoy making the cat/dog beds – especially when they are a gift.  I do custom gift cards along with gift wrapping at no charge.  Seeing the photos of the furballs with their gifts is really the most fun.

Since all the money goes to Morgan’s bank account for his medical bills, he is really the incentive for everything.  Being the famous Pirate Gato, we are always on the lookout for fun and unusual pirate/skull products.  I try to do beds that are unusual, fun, and will also fit into my customer’s own décor.  I do beds from fun pirates, to bugs (we have many cootie fans), to decorator style fleeces.