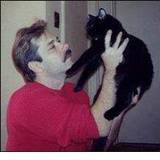 Curt Gehm is a regular commenter in Yahoo! Groups that I follow - after reading some of his comments, I realized that he had some background with the Ragdoll Cat breed and also with Ann Baker, so I asked him for an interview.  Instead of my usual send all the questions and get all the answers type of interview - we emailed back and forth over the course of a week.  It was a lot of fun - enjoy!

What is your history with the Ragdoll breed?

I was looking for a longhaired Black Cat to replace my 16 year old Black Persian. Someone mentioned I should look into the Ragdoll Breed. I called local Ragdoll Breeders in NY and much to my surprise they became annoyed and nasty when I inquired about a Black Ragdoll. I soon learned the Ragdoll is a Colorpointed ONLY Breed.. Someone eventually told me to call Ann Baker and inquire? She told me the only cats that she had that were Solid Blacks were called Miracles but she didn't have any so I found a Breeder in North Carolina who did. This Breeder knew the whole Ragdoll controversy and explained the situation. I purchased my Black IRCA "Miracle" Ragdoll and became a Breeder in 1989.

When you say colorpoint -are there colors/patterns within colorpoint that aren't legitimately Ragdoll?  For example, Lilac or Lynx?

Lynx and Red points are not traditional colors and were added later in the Breeds history. They are still colorpointed so they are legitimate and within the Breed Standard which states the Ragdoll is a colorpointed cat.

What does IRCA stand for?  Who created the IRCA?

The International Ragdoll Cat Association. Ann created the I. R.C.A. herself because as I said earlier the other Cat Associations would not register the Breeds she created.

Did you know Ann Baker on a personal level?

Ann eventually appointed me Secretary of the IRCA and I usually spoke to her on a daily basis. She was very difficult to understand since she was a very difficult woman that obviously had mental problems

Can you please expand on Ann having mental problems - it isn't obvious to me.

Ann suffered from severely paranoid. She did not trust people and she always felt that her life and those of her cats were always threatened. I believe she was also manic-depressive because she had highs and lows and thoughts of grandeur.

I noticed from your email signature that you are the RagaMuffin Breed founder - what does that mean?

In 1993, Ann Baker became terminally ill and was supposed to turn over the IRCA Coporation to it's Breeders. She eventually refused to transfer the Corporation The IRCA was a Private Cat Registry that had no affiliations or  associations within the established Cat Fancy. The Cat Fancy as a whole also DID NOT recognize Ann's cats as any official Breeds. IRCA Ragdolls, Miracles, HoneyBears, etc. could not be transferred into other Cat Associations like ACFA or CFA. We could not use the Ragdoll Breed name because it was Trademarked. I approached ACFA in late 1993 and inquired what can we do? They suggested to form a New Breed with all of Ann Baker's remaining IRCA Breeds. I named them RagaMuffins and they were accepted by ACFA in 1994 as an Experimental Breed.

Who trademarked the Ragdoll name? Why? Are any other breed names trademarked?

Ann Trademarked the "word" Ragdoll and Miracle.She wanted absolute control over HER Breeds but she could not obtain an trademark for the cats themselves or her Breeding Program. A label was created that she applied to the cat carriers.In order for the trademark to be enforceable it would have to be applied directly on the cats. The only way this could have been accomplished is with Tattoos.

What are the differences between Ragdolls and RagaMuffins?  And why does it all matter?

The major differences is that they were founded with entirely different genepools. The Ragdolls are also a Colorpointed ONLY Breed. The Fur is different as are the eyes and nose. RagaMuffins in my opinion are also larger.

How can some be sure they are getting a Ragdoll?

Purchase kittens from reputable Breeders ONLY and only from Breeders who register their cats with CFA or ACFA in the USA and the GCCF in Great Britain. TICA has a very open outcross policy so a Munchkin could be bred to a Ragdoll and the resultant litter could be registered as a Ragdoll.

What would you look for if you were wanting to buy a traditional Ragdoll?

I would seek a Breeder who shows their cats frequently, early neuters and has had their cats DNA tested for all the known HCM genes.

I believe if you purchase from a reputable Breeder and they say the Parents have tested negative the Breeders have done the testing. I would still "test" a kitten if I were purchasing a kitten as a Breeding cat to be safe than sorry.Not everyone is honest!
Also, how can someone like me that is pretty ignorant when it comes to HCM genes testing be assured that the cats have been tested for all known HCM genes? You can't so if you have suspicions about any Breeder go ahead and re-test the cat or kitten.

I believe I have heard that certain testing facilities are better than others?

UCLA Davis developed the Test so I would use them.

I assume you were a Persian breeder before you became a Ragamuffin one?  How did you get into breeding?

I bred 2 litters of Persians back in the 70's for friends and family.

You were a Ragamuffin breeder, correct?  For how long?  Did you breed other breeds other than Ragamuffins?

I bred RagaMuffins ONLY from 1994-2006. I was one of the Breed Founders and named the Breed. I was also the first elected ACFA RagaMuffin Breed Chair and showed the Breed heavily in the N.E. Region of the USA.

How did you come up with the name RagaMuffin?

Ragdoll Breeders always said the IRCA cat were Street cats so it came naturally.LOL. It could have been "Ragmuffin" but adding the "a" and capitalizing the "M" placed the RagaMuffin ahead of the Ragdoll in advertising and also ahead of "Ragdoll' during Judging.

What is your interest in following Ragdoll breeder groups?

I believe the Ragdoll Breed is in severe trouble and that certain Breeders are now looking at the Breed as a source of a quick income. The influx of Solid and Mink Breeders who know nothing about the Breed, it's history and the Ragdoll Breed Standard are becoming rampant and are having a negative effect on sales of reputable Ragdoll Breeders. People need to understand that the current Solids and Minks do not trace their ancestry back to Josephine and the other foundation cats of the Ragdoll Breed. These newer solids/minks trace their ancestry to later day IRCA cats that were IRCA registered and later became the Foundation cats of RagaMuffin Breed.

Do you currently have cats?  How many?

I have one Black and White RagaMuffin Male that just turned 7 months old and also have a Blue Mink and White Male that should arrive in a few weeks.

Do you prefer males?  Where are you adopting your RagaMuffins from?

Male or female, it doesn't matter. I wanted males since they do tend to be larger and make a better impression than a possibly smaller female. Nat is my Black and White and he is from Encore Too Cattery in Florida and Beau Blue my Blue and White Mink is from Snuggle Purrs Cattery in Wisconsin