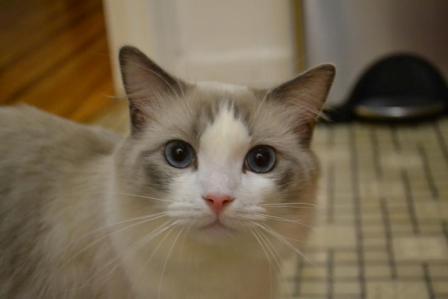 Huxley is our beautiful Blue Bicolor boy who celebrated his first birthday on January 2, 2012! My husband and I adopted him in November from LuvleeDolls, a small (and amazing!) Ragdoll cattery on Long Island. Huxley is our second Ragdoll from LuvleeDolls and we highly recommend them. They truly love the breed (and every single one of their cats) and they are committed to producing beautiful, healthy cats with the perfect Ragdoll temperament. 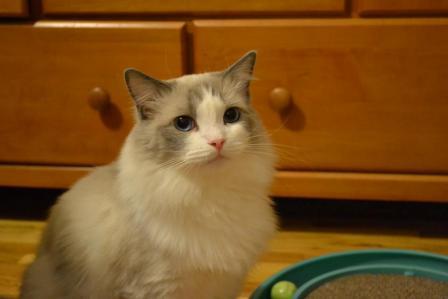 Our Huxley is a perfect example of their wonderful breeding. He is the sweetest most loyal friend you could ask for. We call him our "Sweet Gentleman." He is also a wonderful big brother. He is very patient and protective of his little half-brother, Gatsby.

Brothers Playing in a Box

Huxley is a great companion. He follows me all over the house. He is curled up right next me as I write this. He loves being rubbed, but also enjoys just being near his brother and human "parents." He is also a music lover and likes to listen to me sing around the house. Sometimes he even joins in! Huxley is practically perfect in every way and leaves all the hijinx and misbehaving to his baby brother. 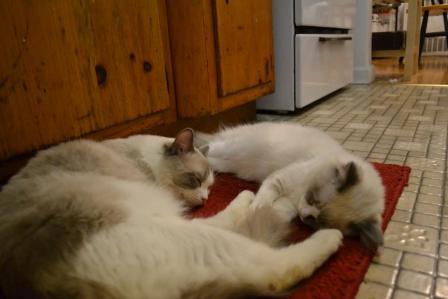 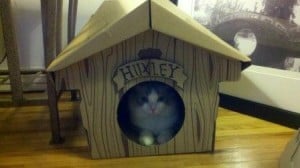 Huxley's all time favorite things are: Huxley Dislikes: Huxley's Trademark Moves:Huxley has two specialties when it comes to interacting with his human parents. He is a spectacular alarm clock. About 5-10 min before your actual alarm clock is set to go off he will climb onto your chest and start kneading you awake with his paws. It's adorable and a much better way to wake up than a blaring alarm. Huxley's other talent is giving hugs! If you are laying down he will walk up to you and wrap both his front paws around you and join you for a snuggle. He is truly precious. 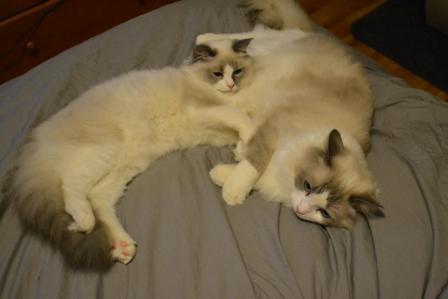 What's in a Name 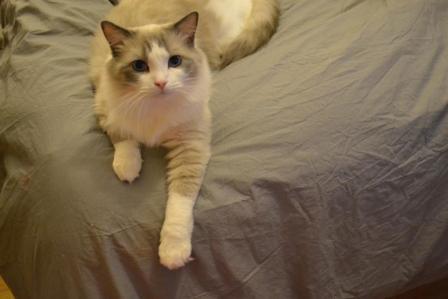 My husband and I felt that our Ragdolls should have a distinguished gentlemanly name to match their regal look. We named our first cat Gatsby because he's a spunky little kitten with a naughty side. We chose the name Huxley because it sounded just as gentlemanly and also because it fit the same literary time period and I liked the idea of having 'Art Deco' cats.Gatsby & Huxley's Facebook PageHuxley's Portrait 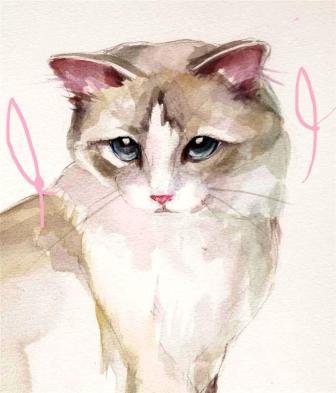 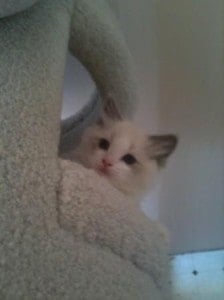 We adopted Huxley when he was 10 months old, so he spent most of his first year at LuvleeDolls Cattery where he was loved and socialized beautifully. The wonderful Lisa Sullo of LuvleeDolls was kind enough to send me some of Huxley's baby photos. He is so cute!We simply adore our Sweet Gentleman, Huxley. He completes our little family perfectly.Christine & Andrew Astoria, New York