Editor's Note: I am very excited Hugo's parents decided to share his Ragdoll rescue story and I was privy to it for months through e-mail and it was gorgeous.

Hugo - Ragdoll of the Week

Hugo’s story is probably a little different from the average Ragdoll’s. For one thing, he was adopted by my wife and myself from a shelter. But what made matters even more heartbreaking was that he had been in that shelter, living in a cage, for more than a year.

How he ended up in that shelter (a very reputable one which is part of an animal hospital here in Montclair, N.J.), is a little mysterious. What we do know is that sometime in the fall of 2014, he was found in a local cemetery, hiding, terrified and malnourished. He was brought to the shelter, where he was nursed back to health. His physical health moved along smoothly, but his psychological adjustment was long and difficult. He was withdrawn, almost as though he had given up on life. The good people who work for the shelter and its cat adoption program tried hard to bring him around, but he rarely showed signs of doing so. He would play with toys at times, and there was one male volunteer who managed to make prolonged physical contact with him (Hugo’s name in the shelter was “Simka”). The women who ran the adoption program tried very hard to find him a home, but he was unresponsive to potential adopters as well. And no one was willing to take a chance on him; “too old” (he was 3 years old when he first entered the shelter), “too big” (he is a robust Ragdoll cat!), and of course, too withdrawn.

Fast forward to October 2015. My wife and I had lost our beloved Maine Coon Cleo in June of that year, and her death was premature and devastating to us.

It took us a few months to feel ready to adopt again, but when we took that step, we had no idea we were going to encounter such a special cat as “Simka”.

We were introduced to a few other cats initially. We sat in one of the hospital’s examination rooms, and the cats were brought to us one at a time. They were nice kitties, but nothing “clicked”. Then Allie, the woman from the adoption program, said “I’ve got another cat – he’s been kind of a project for us. He doesn’t respond very well to people. I’d kind of just like to show him to you because I think it would be good for him.” We were a little confused by her hesitant manner, but then she told us his story, and we understood. She brought in a huge carrier, and inside was an appropriately HUGE cat! Bigger than our late, lamented Maine Coon! But he looked, not scared, but lost, almost like he was in a daze. He was clearly beautiful, but not altogether “with it”. But that was before she removed him from the carrier. Then something magical happened. To the astonishment of Allie and the other people at the shelter, he came alive when he met Gloria and me! He started to purr; he rubbed his head against our hands; he rolled around on the exam table;

he let us pet him like we were the oldest friends in the world! Allie said he had never done anything like this, ever, and there was no explanation for it, other than that something “clicked” when he saw us. As we were getting acquainted, Gloria decided his name had to be “Hugo”, because, well, he looked like a Hugo! It took us about ten minutes to decide that we were going to give him a home. Because he had had such a hard time at the shelter, and had been there so long, we were given lengthy instructions about how to manage his transition to living in our home. Though the adoption people were thrilled that we were bringing Hugo to our home, I got the feeling that they wondered how long it would take him to get acclimated to it.

It did take a while. The first few days, in fact, he refused to come out of his carrier. And he went without food and water for four days. I was starting to get really worried, and I began to seriously wonder (out loud, in fact) whether this was going to work out. (A fact my wife continues to bring up, teasingly, to this day!)

So the only option was to keep him in a “safe room” – in his carrier, at first, though he eventually left its confines when hunger got the better of him. We kept him closed in that room, a small room with a window, with his food and litter pan on hand. He spent about a week hiding behind my stereo system. Then there were a series of small steps forward, week to week, the first one being when he discovered the (very cat-friendly) ledge by the window. (There had been no windows in the room that housed the cages at the shelter.) The next step was when he let me pet him as he sat on that window ledge. A further step: I got down on the floor, and he joined me, and he finally let that pent-up emotion out, purring and head-butting and rolling around, just as he had when we were introduced. The next step was leaving the door to the room open. It took a while for him to step outside of it, but very, very hesitatingly. He slowly explored our adjacent bedroom, but any sudden noise or unexpected motion sent him running back to his hiding place. At night, we could hear him in the little room batting his toys around, so there were signs that he was feeling better.

By Thanksgiving, he had taken to walking around the bedroom, tip-toeing down the hall, and just barely peeking in the living room. But never for very long.

By Christmas, he took the amazing step of joining us on our bed. And, of course, once there, purring and rolling around, etc. – it was clear that this was a very affectionate kitty deep down inside!

On New Year’s Day(!) – who could make this stuff up? – he made it into the living room. His discovery of the sofa was a moment of great triumph for all concerned; from that moment on, he was At Home, and we were “his humans”.

When we think about his past, and the spirit-breaking ordeal of spending all that time living in a cage, it is amazing to see him now. Perhaps it was because he was such an affectionate, sensitive animal that he took confinement so badly. (Who wouldn’t?) And a lot of his behavior, we have learned since, is attributable to his Ragdoll nature. But this has turned out to be a cosmic win-win for all: Hugo gets a nice, cozy home to live in, with two doting, affectionate people to take care of him, and 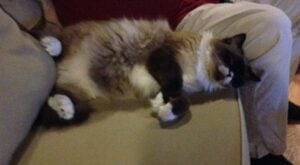 Gloria and I get to share our home with one of the most wonderful cats in the world! He is so comfortable with physical contact; there is almost never a sense that he is about to swat us away (the “enough!” response that over-stimulated cats often show). He just plain loves to be loved! And he takes to grooming as though it is just an extension of that love – something we have never encountered in another cat. He loves his toys, batting them around everywhere, losing them, and then mysteriously making them appear again a few days later! He loves to look at the world passing by through our windows (especially, no surprise, the birds who populate the trees in our yard). Though initially he was so silent we thought he might be mute, he has been meowing – a little squeaky sound! – for about a month now. Too adorable for words.

So now, four months since he was adopted, we simply can’t keep his adorableness all to ourselves! We hope you enjoyed hearing his story, a sad one with a very happy ending – as well as seeing the great soulful beauty of his pictures. Hugo’s days of sadness are behind him, and we will be making sure he has the best possible life for the remainder of his days. As my wife is fond of saying, Hugo is a very good boy!