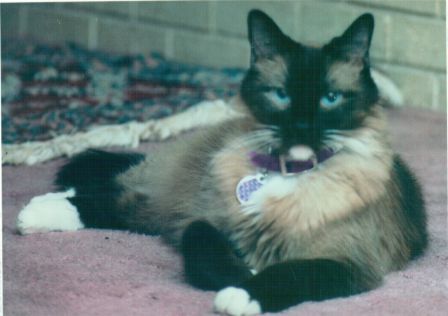 Merlin - the cat behind Merlin's Hope: A Ragdoll and Maine Coon Rescue

A cat by any other name is still a cat. Wait, that should be a rose, but you understand what I mean.  T.S. Eliot knew how important it was to choose a cat’s name. After all, he wrote an entire poem called “Old Possum’s Book of Practical Cats”:The Naming of Cats is a difficult matter, It isn't just one of your holiday games; You may think at first I'm as mad as a hatter When I tell you, a cat must have THREE DIFFERENT NAMES. First of all, there's the name that the family use daily, Such as Peter, Augustus, Alonzo or James, Such as Victor or Jonathan, George or Bill Bailey-- All of them sensible everyday names. There are fancier names if you think they sound sweeter, Some for the gentlemen, some for the dames: Such as Plato, Admetus, Electra, Demeter-- But all of them sensible everyday names. But I tell you, a cat needs a name that's particular, A name that's peculiar, and more dignified, Else how can he keep up his tail perpendicular, Or spread out his whiskers, or cherish his pride? Of names of this kind, I can give you a quorum, Such as Munkustrap, Quaxo, or Coricopat, Such as Bombalurina, or else Jellylorum- Names that never belong to more than one cat. But above and beyond there's still one name left over, And that is the name that you never will guess; The name that no human research can discover-- But THE CAT HIMSELF KNOWS, and will never confess.Three names? Really, sometimes it is hard enough choosing one, and choosing a name for your pet is an important part of your relationship. So, how do you choose a name?Websites of names: There are a number of websites that help you find names; there are pet name books and websites; there are baby name books; books about cats that help choose names (see Jenny Dean’s A Ragdoll Kitten Care Guide) are everywhere, but how do you choose? When I first met my Domestic Short Hair white girl, I was unable to adopt her.  I was in a no-pets apartment, but two weeks later I was still thinking about her, and by the time I went to adopt her (and take her home to my no pets apartment), I had already named her Nimue, after the Lady of the Lake in the Arthurian legend. That started a theme of Arthurian names (the Arthurian legend was the topic of my dissertation in college) which included Guinevere, Merlin, Lyonesse, and Taliesin.  There are also pages on Floppycats that deal with cat names: 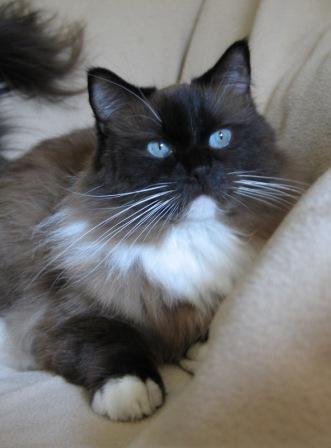 As a literature teacher, one of my favorite tools for names is myth, legend, fairy tales, and literature. Aslan came after the lion in The Lion, the Witch, and the Wardrobe. Bastien was the name of one of my favorite characters from a fantasy series. Saxon (Anglo-Saxon) is an obvious reference to the Middle Ages.  Gryffindor, of course, came from the Harry Potter series.  As much as I like literary sounding names, some cats just don’t fit the mold.Because we rescue so many cats, sometimes as many as 20 a month, we have a list of names that we can use, names from movies, books, people we meet, names we steal off of the Floppycats website. Often those names work, but we often find that we have to change the names once the cat is actually in a foster home. A gorgeous little Siamese Seal Point kitten got the unfortunate name of Boudicea (a famous warrior woman from British history); she immediately became Boo instead. A poorly named Oberon became Obi.  Several of my own personal cats have had name changes: Nimue was Jazzmine at the shelter, Merlin was Pinocchio for his long nose, Shaman was Misha. Roanoke was the almost unpronounceable Italias. 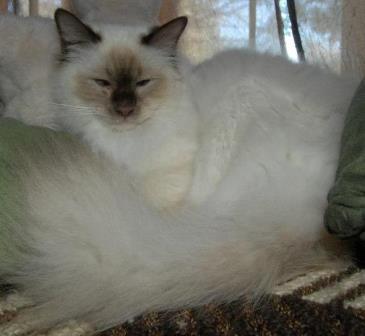 Roanoke’s name came from the historical city that became legendary when it disappeared. Historical characters, place names, and famous people from history make great names. One of my adopters, who has adopted four cats from Merlin’s Hope Ragdoll Rescue, has named his cats after presidents. One of my friends has a Samson and Delilah. I love to use Romulus and Remus when we have brother cats.  One summer, at the rescue, we did destinations: Tahiti, Georgia, Atlanta, Paris, London, Russia (who became Russ).So, how do we choose our names? Well, look first to your interests.  Books, authors, movies, actors, musicians are fertile grounds for names. One rescue in California names its cats after famous actors; one cute pair was Brad Pitt and Angelina Jolie.  Mr. Darcy makes a great name for a slightly aloof but lovable handsome boy. Hobbies can give great names; one of my rescues was named Purl. Her owner had a knitting shop. A Welsh adopter named her little girl Tuppence. A beautiful Seal Point Siamese girl might become Pyewacket after the magical cat in Bell, Book, and Candle. 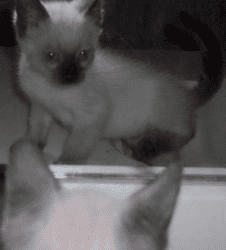 Cat colors also provide help. A gorgeous Blue Point Siamese became Blue Diamond Philips, a Blue Point Ragdoll was Blue Danube (Danny for short). A cat with gorgeous green eyes might become Emerald. I love the name Pumpkin for big red cats. Callie is a cute, if obvious, name for a calico. Inky was the name of a solid black cat that visited when I was a child. Alaska and Avalanche were the perfect names for a pair of extremely large, solid white Maine Coon mixes. Copper and Nickel were a pair of cute mix kittens (one red and one blue). Flameheart was a gorgeous Red Ragdoll mix. Using foreign words for colors--Azul for a blue cat, Rouge for a red cat, Blanco for a white cat—works well.Personality quirks make for great names. One gorgeous Ragdoll came in named Squirt. We renamed him Flirt, much cuter. The Snowshoe who came as a rescue but stayed was Prince Charming, called Charm, because he is, well, charming. A female cat with a lot of attitude might become Sassy; a prima donna cat might become Princess. My vivid calico Maine Coon, Gypsy Rose, was named after the famous dancer, Gypsy Rose Lee, but her name also fit her personality.  A poor grumpy Ragdoll became MacGrumpy, shortened to Mac after he became nicer. Other people like to use human names. One friend named her large Red Persian, Bob (short for Big Orange Boy). In the rescue, we get cats named Max, Leo, Rex, Kitty, Bella, and Sam. Human names, especially if you do a search for a particularly relevant meaning (see baby name guides) work well.  Leonidas, for example, means “lion” and is perfect for a big red Maine Coon. Charlie, short for Charles, means “man” or “warrior.”What I have personally discovered is that often, if you wait long enough, your cat will tell you his or her “everyday” name. A quick “sexy” look from a cat might earn him the name Sean Connery, a cat that flitters around the house might become Butterfly, a cat that prowls around all night might become Luna. So, a cat by any other name is still a cat, but put some thought into choosing that name. Remember that your cat and you might have to live with that name for 20 years. Oh, and don’t forget that once you have an everyday name, you still need two more names, but we’ll talk about that later.