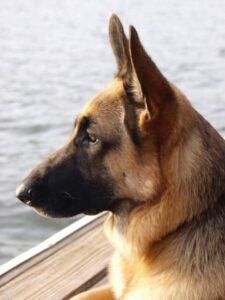 Yesterday, February 19, 2016, my family said goodbye to our 10-year old German Shepherd dog, Napa. Yesterday, Feb 19 was also her birthday.  As many of you know, my mom found tumors on Napa's stomach the day after Thanksgiving 2015, and she had surgery to remove them on Dec 1, 2015.  After the biopsy came back, it was discovered that Napa had stage 4 lymphoma - originating in her breast tissue.  The vet said that chemo wouldn't help given the aggressive nature of the cancer.  We did go to a Chinese acupuncturist and herbalist to hopefully give her some relief and prolong her longevity and quality of life.  She took Chinese herbs - later on prednisone and also got vitamin B-12 shots and Vitamin K chewables.

I posted about her passing on Facebook yesterday and some of you have asked what happened with Napa yesterday. I am a firm believer in sharing knowledge and information, in case it helps anyone down the road.

On the 18th of February, I would have never guessed what would transpire the next day.  I am still in shock that it happened as quickly as it did.

As many of you know, Napa is my sister's heart dog - meaning, she had a very special bond with her. I am 36 and my sister is 25. Amy spent her high school years and after with Napa - living with her, etc.  As I like to say, Napa is Amy's Rags.  My parents also dearly loved Napa.

Amy was in Europe (a trip planned long ago before the cancer diagnosis, and I do not share our travels on the Internet until after the fact due to our exposure on the Internet) - Amy was due back in Kansas City last night around 9pm and was excited that Napa had lasted and that she would be able to touch her again.

Yesterday morning at 9am my mom phoned me to tell me that Napa had had a seizure. In hindsight, my mom figured out that Napa had had two seizures. When she let her outside at 6am to go to the bathroom, my mom found her on the ground kicking her legs - my mom thought she had fallen and was trying to get up (it was dark and Napa has never had seizures and it was towards the end of the seizure, so there was no reason to think any different). My mom ran inside to get my dad, and Napa was able to walk back in the house.  My mom offered her food and Napa gobbled it down.  At 9am, Napa had another seizure - and my dad had phoned the vet.

I came over a little after 9am (right after my mom had phoned me) and so did my mom's twin sister, Aunt Jean.

Napa seemed OK to me - not wonderful, but OK - light in her eyes ("light in her eyes" is an essential element to me in making the final decision) and attentive to what was going on around her.

At 10am she had another seizure (she was laying down when it happened - so she didn't have far to fall) - it lasted 1 minute long and if you've ever seen a seizure it is AWFUL. We thought maybe it had to do with water  or something (she had just drank water) - weren't sure and were still waiting to hear from the vet (who was in surgery). In between the seizures, she seemed OK - but tired. We even went outside again and she walked around, trying to go to the bathroom (she had been having more trouble going #2). We were going to load her into the car to take her to the vet - but then she wanted to go back inside, so we went with her. She drank a bunch of water when we got inside.

At 11:30am she was in between the door frame to go out on my parents' back patio and started to have another (standing up this time). Thank god my Aunt Jean was right there and grabbed her back legs, so she wouldn't break them as she fell - that one lasted about 30 seconds, but it took her a lot longer to come to.

After the 11:30am one, we knew it was time. She looked exhausted and my mom knew the cancer had gone to her brain. We could have waited for Napa to gain her strength and get her in the car, but we called my brother Marsh and he was available to come over to carry her and lift her in the car (thank god).

We drove to the vet and arrived around 12:15-12:30 pm. There were many hawks flying above us and one in particular flew directly over us when the vet came to the back of my mom's car to give Napa the sedative.  My mom, my dad, my Aunt Jean and I were around Napa in the back of my mom's car - it was a beautiful day in Kansas City - 72 degrees in February, unheard of.

At the end, she was ready and asking for help - and I believe it was peaceful. She passed about 1pm.

My sister wasn't due into Chicago until 3:30pm and HAD NO IDEA anything had been going on or happening as she had been on a flight over the Atlantic. Waiting for her to call to tell us she had arrived safe and sound in the USA was excruciating for me as all I could think about was her excitement to see Napa again and the dread of delivering the opposite news.  Of course, I wanted to hear that she had arrived safe and sound, but didn't want to deliver the news and especially over the phone while she was in the middle of Chicago O'Hare.  Yet, I didn't think it appropriate to have her wait to get home to hear it (as I would not want someone keeping that from me).  When I told her over the phone (my mom was crying too hard and couldn't), the pain in my sister's voice and her repetition of the word "No, no, no, no..." is something I will hear over and over again in my head.  But what it represents is the beauty of love and I am grateful my sister had the joy of loving a dog like she does Napa.

I am also grateful that my parents had the joy of loving her as well - as she taught them a lot as well, and they are heart-broken too.

I believe we did the right thing for Napa in the right time frame, and she clearly gave us clear signs that it was time.  Do I wish that Amy could have touched her and held her once more?  You bet.  But my spiritual beliefs are such that I believe Amy wasn't supposed to see all that transpired yesterday and that her final memories of her dog will be more positive - and believe Napa's soul chose this for Amy.

I am grateful to Napa for the lessons I learned since Dec 1 and before then.  I was able to see a strength in my mom that was most impressive - especially during the seizures when I was a basket case.  My Aunt Jean's strength was also incredible and a blessing yesterday.  The love of a family dog shows you how absolutely beautiful the strength of love can be.

Rest in peace, Napa girl.  I will miss you - we all will.

Thank you to you all for all your prayers, love and support during the last 2.5 months - I will never forget it.

For the next week, we will be posting photos in tribute to Napa on our Facebook page.  We would like to share our love of her with you and hope you'll join us - Floppycats on Facebook.