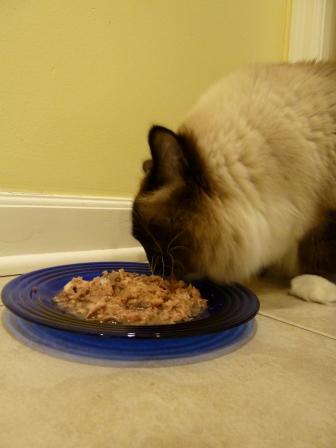 Floppycats' reader, Patti, recently emailed me asking how long can you leave canned wet food down.  I really have no idea.  Do you?

As you know, we began Pink Sugar's transition to an all wet food diet back in December (I think it was December).  Anyway....

We've been feeding her an entire 3 ounce can of wet food about 2 - 3 times a day.  On average she only really eats about 2.5 cans a day.  The rest gets thrown away (usually because it's been left out too long and she won't touch it).

We've left the wet food out for her to feed on for as long as 10 hours (mostly overnight) but now I'm thinking that may not be so healthy for her.  She had a vomiting incident the other day (it was just her wet food that was coming back up) and the first time this has happened since we transitioned her.  I don't know what caused her to get sick and throw up (in every room in the apartment...sigh).  But I'm wondering if I should not be leaving her wet food out for such long periods of time.  So, I did some research on the web and lots of sites say to leave the food out for no longer than 30 minutes to an hour (depending upon the temperature in your house).

THE QUESTION:  How long do you leave the wet food out for Charlie & Trigg to eat before you either take it up and store it in the fridge for later or throw it out?

Patti & Pink Sugar (Who is all better now and vomit-free!  Yay!)