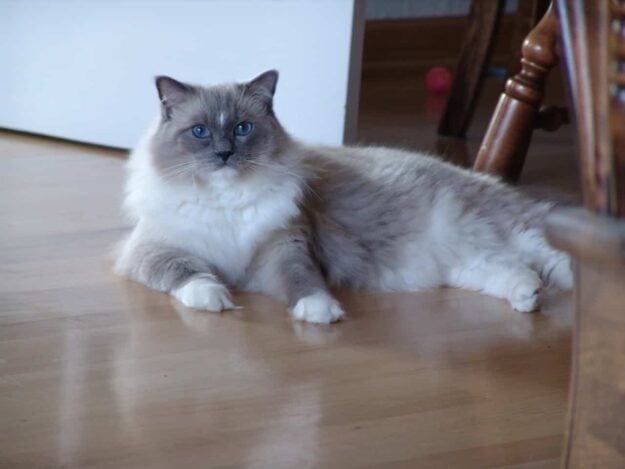 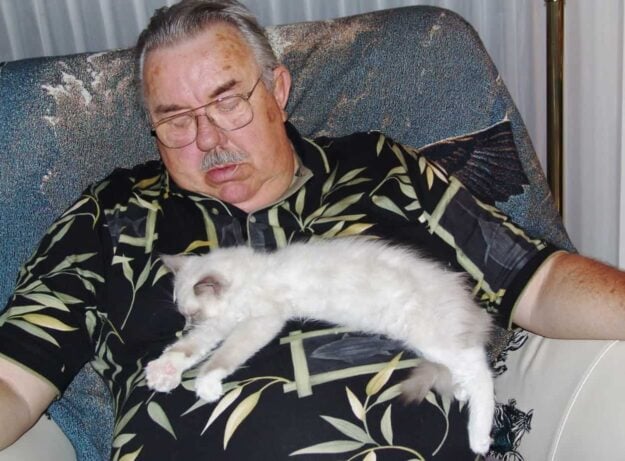 He did not start out so big, in fact when we brought him home, he was tiny. Everyone in my family knew we were bringing home a ragdoll kitten. I thought we were just going to go out to the breeder and pick him up, but my husband kept insisting we had to go to brunch first. I couldn’t figure out why and he was insistent. So I gave in, and we went to brunch.

I should have known there was something afoot. When we came home, there were lots of cars parked outside – not all that unusual as we did have lots of parties at the house, but I had not planned anything; that I remembered… 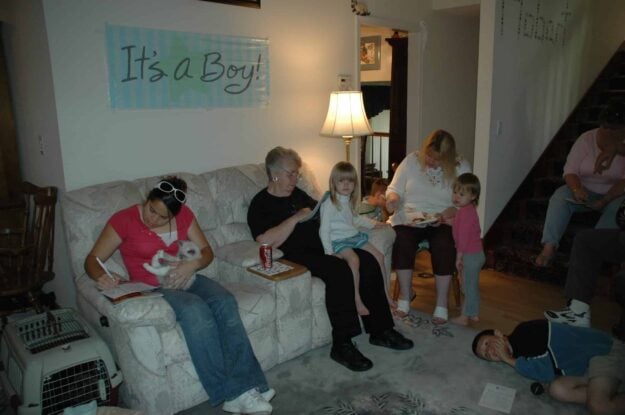 Waiting at our home were 15 or so of our family and close friends to throw me a “Kitty Shower” to welcome home Hobart! There were presents, food, cake, and silly shower games like: Name the Poop – you might not want to try this one at home – you had to identify the type of candy that was realistically nestled in kitty litter – eewww; How many Words can you make from the phrase “Hobart the Cat” – (The answer in case you are a nerd = 148); there was a Hobart Word Search and a Hobart’s Word Jumble; and one of my favorites was a tray with all kinds of cat toys, treats and other accessories – you got to view for 15 seconds, then write down as many of them as you could remember. I failed miserably – I don’t know why! My sister, the party planner is devious. 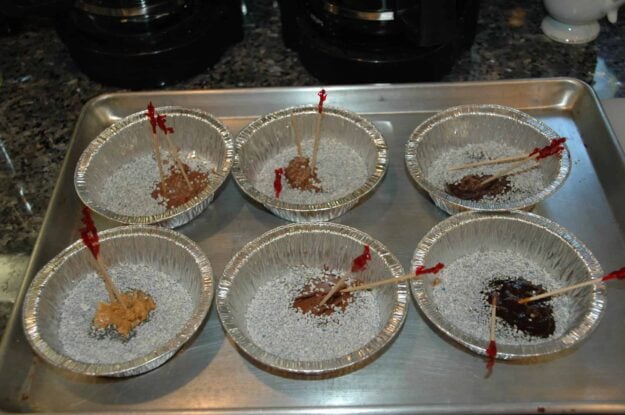 What a wonderful way to welcome our new baby home! 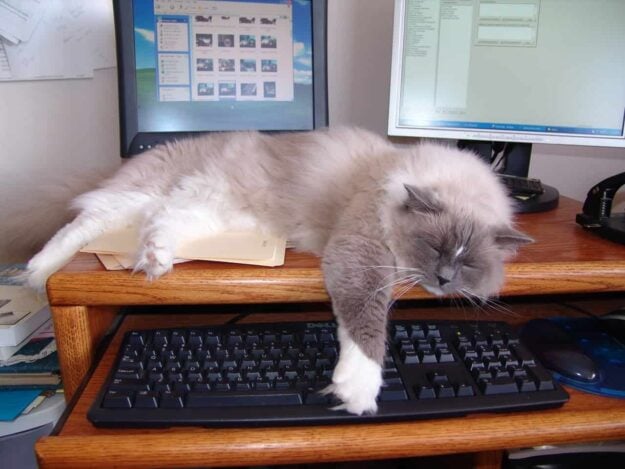 Unfortunately Hobart never grew to like crowds. He preferred just HIS people. We were quiet and crowds were noisy. Whenever we had parties, Hobart was sentenced to “Kitty Jail”. He was sent to our bedroom and the door was closed. He didn’t like to be left there, but it was better to leave him there than to lose him if he ran outside because he was scared. He was always happy to see us when all of the guests left. 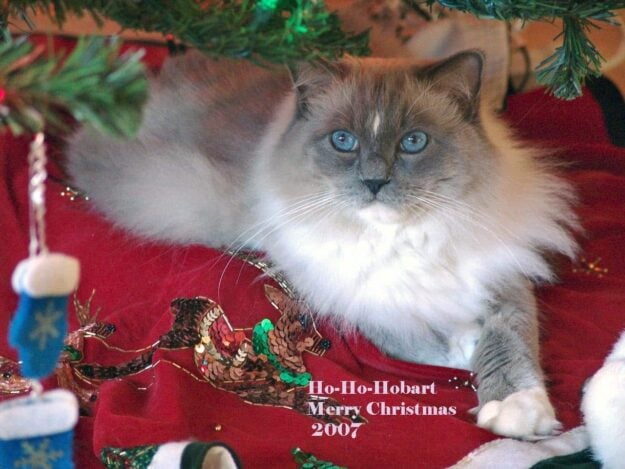 He loved HIS Christmas tree. He would protect it and nap under it from the day I put it up to the day I took it down. If the grandkids came over, he would hide under the tree and charge them if they got too close. He had his own ornaments – unbreakable blue felt mittens. I always hung them on a bottom branch so he could see them. If he played with them it was ok because they were not going to break. 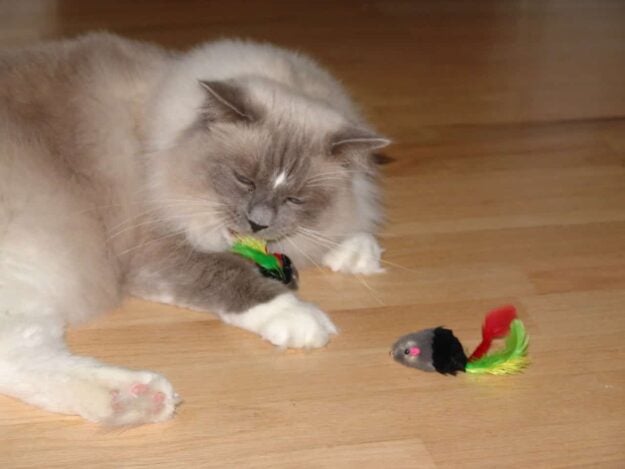 Something else Hobart loved was toys. His preference were plastic springs or those little furry mice with rattles inside. He would chase them all over the house, usually losing them under our couch or china hutch, sometimes under the piano. We even fashioned a “toy getter” out of a wire clothes hanger to dig the lost toys out from behind the china hutch. It was amazing how many lost toys were located back there.
One of the best things our Hobart did was purr. He was a cuddler. He would sleep next to me, usually nuzzled up against my chest, purring softly in my ear. He wanted to be near his people, even if that meant lying right in the middle of your desk while you were working – typical ragdoll! We even gave him his own stool in the kitchen so he would be up high and not under foot, but still be with us when we were cooking. 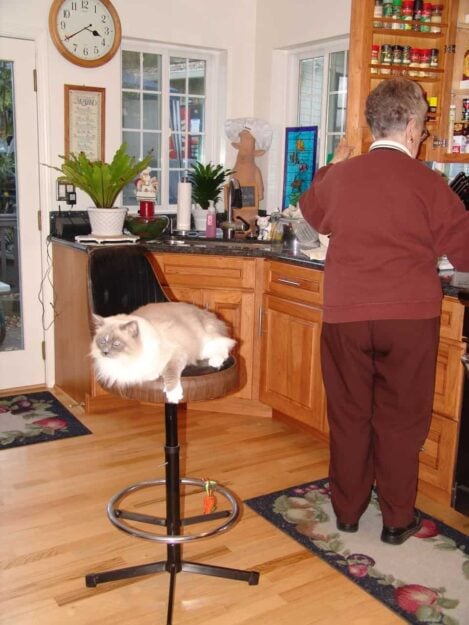 The hardest part was trying to keep him off the counters. You always knew when he got down because the thud when he hit the floor would give him away. I could not scold him, who could do that to such a pretty boy?

He has been gone nearly one year, I miss him every day.