After growing up with dogs, iguanas, horses, three bull frogs (Bubbles, Burp and Belch), that last thing I thought I’d be is a cat person. After trading ICHC LOLs with friends, and even getting one LOL of the day myself, it suddenly hit me: Why didn’t I actually get a cat of my own? If nothing more I could take embarrassing videos, have them go viral and use ‘em to market my software. 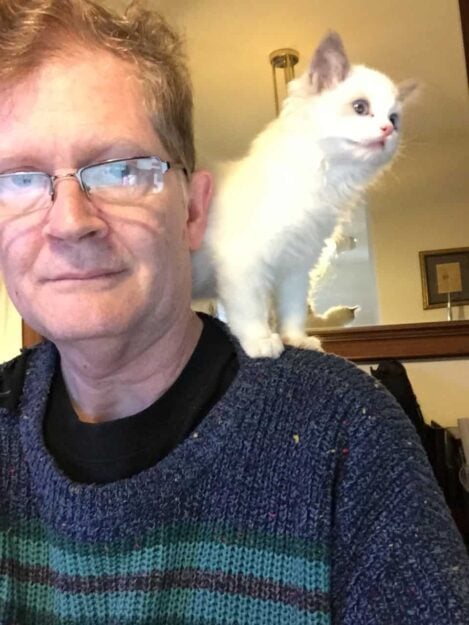 I finally decided to make the leap after a tough time personally, in which I used Emergency Kittens to keep me laughing, even if for a few minutes a day. (There’s a pattern emerging here, I just know it). After getting recommendations for Fur-Real Ragdolls, south of Sacramento, I picked out a beautiful floofy little boy. Two weeks later he was ready to pick up and became the first feline-based life unit (of the seal-point variety), to invade Chez Mike.

The floppycat earns his reputation.

After worrying about making sure all of my power cords were covered, and fearful that might not actually know how to use the litter box, it was all pointless as he fit right in. Needless to say, my camera got a good workout those first few days, and as such I will never, ever, ever complain about friend’s baby pictures again. Never.

Because I went to a breeder for the first one, I planned on getting a rescue kitty for a companion to help balance things out.

Originally I had planned on naming one Neil and the other Buzz, but finally settled on Higgs, for the Raggie, and Boson for the kitten to be rescued later (names purely for the enjoyment for those of you who are up-to-date on recent discoveries in sub-atomic physics). Note that I do have some nicknames: Staypuft and Q-Tip are my favorites for the Raggie.

I never knew how verbal kittens where, or the great variety of little noises they would make. I was instantly charmed each morning when Higgs would great me like clockwork at my bedroom door. If he heard me stirring in the morning, he’d let out two timid little mews, followed by a third that sounded disappointed if I didn’t open the door in time. 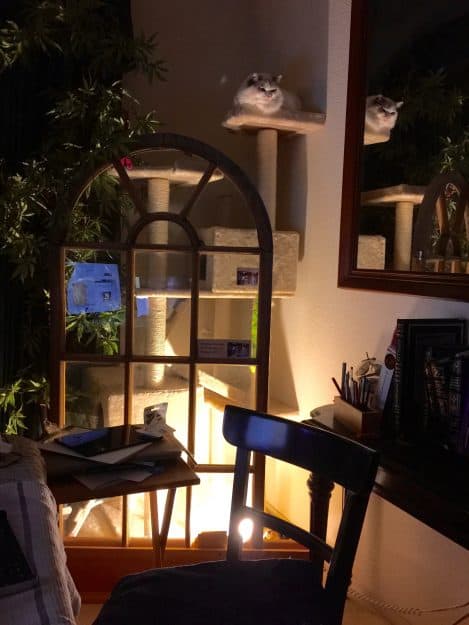 The first night I had him, I had my legs crossed, and while working on the computer I felt something odd tickling my foot. Glancing down I caught Higgs on his back, batting around my dangling foot. Another time while reclining on the sofa, he’d strut up my chest, gently bite me on each side of my chin then amble away cooing or gurgling or chirping or whatever it’s called while I was giggling myself silly.

Little Higgs also loved ice-cubes, and could bat them around like a hockey champion on the kitchen floor. Then I learned that cats love to place fetch. Three to four times a day, he’d bring me one of his toys, drop it at my feet and give one barely audible little mew or a gentle nip on foot. A few times I just gave him a stare and did nothing to see what he’d do, and he’d usually kick the toy a few inches closer.

However, even as a Raggies are supposed to be the most sociable of kitties, he really didn’t care to be held much, usually putting up with me for about 30 seconds, then turning into a cry baby until I put him down. But being held is part of the job description, so that’s something he’s going to have to get used to.

If there was a problem, it was the fur. Now I know. Fortunately I have a white carpet, so white cat hair blends in just a little. Unfortunately Higgs hated being brushed. Only after months of trying, experimenting with seven different de-shedding brushes and combs, have I finally got the rhythm down, but could only get in about 30 seconds at a time before he’d get up and move away for a less annoying part of his floor (meaning, away from my computer table). However I’ve made a breakthrough. Just last week he came to me with his “I want something” creaking-mew. He had no toy for fetch, and it wasn’t nearly time for dinner, so I finally determined that he actually wanted me to brush him. Something he can now tolerate for a full five minutes. . Inconceivable!

Now at the rip old age of two, Higgs no longer really needs to be with me all of the time. But if he’s in another room, he’ll usually park it where he can at least see me. I like to think it’s to ensure I am well taken care of. After all, we all need a guardian-kitty in our lives. 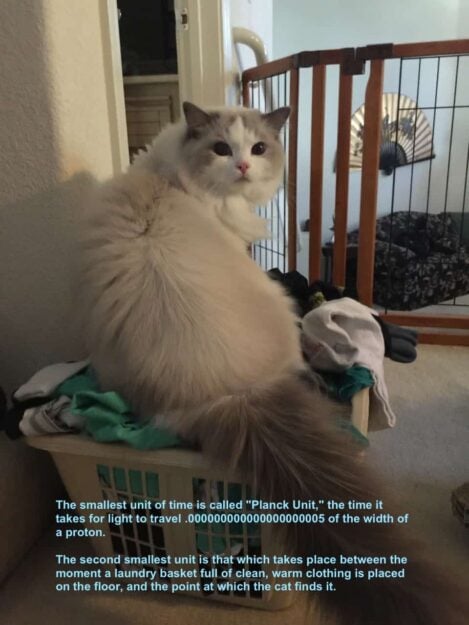 The next spring I heard that May and June were “kitten season” so opted to pick up the official FoH, (Friend of Higgs), feline-companion unit at that time. I finally settled on an adorable kitten (are there any kittens that are not adorable?), named Ellie. She was a flame point Siamese, weighing in at only a scant two lbs. And as with Higgs, I had the same trepidation about her 12 weeks of life experience, but when one night she slipped under the covers with me, or would curl up about 3 inches from my ear, purring 24/7, I knew she’d work out. And every so often I still will wake up with kitten toys next to me or in my shoes, or…

The most worrisome task of all now finally came up: that of introducing the two with a minimum of bloodshed. I had kept Ellie in my bedroom until she got used to me, while I planned for her ID, “Introduction Day.” So I created a “kitten simulator.” I shot about 5 minutes of video on my iPad of her in her carrying case just making all sorts of racket (no more adorable racket has yet to be found). I took the iPad and let Higgs watch it for a couple of times a day for three days. Next, I brought the case down, sans kitten, and put the iPad inside leaning against the front hatch. That way Higgs would get her scent along with the noise and appearance. Three days after that while Higgs was watching, I slowly removed the iPad and Ellie was there for real. This would repeated a few times each day for two more days. Finally, I opened up the gate and with nary a hiss, they seemed to almost instantly bond.

couple of photos of my Kitten Simulator 3000 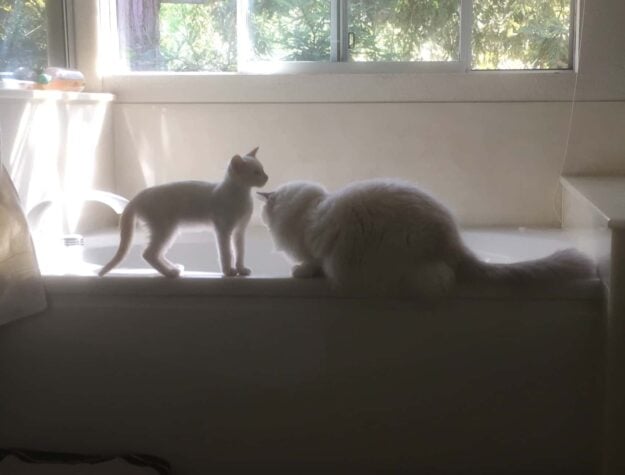 Now since Higgs had a little sister of sorts, he stopped coming to me to play fetch. I felt vaguely insulted. Three weeks after ID, I discovered that Little Miss Boson had the dreaded one word (or is it two?) condition, ringworm. Back to my bedroom for two weeks. Ugh. Higgs in the meantime spent several days moping around, wondering where his friend was. After three days I got that old familiar nip on the feet, and looking down, there was Higgs with one of his toys, wanting to play fetch again! I think I’ll keep him after all.

One more little note about cat training. The only thing about Ellie that really became a nuisance was the way she’d try to grab some food off of my plate during dinner. She’d jump up on the table, I’d grab her and put her on the floor, she’d jump up again, and so on and so on, blah blah, blah, you’ve been there I am sure. After weeks of this I finally realized that she didn’t speak my language, so I would have to speak in a tongue she’d understand. That next evening when she headed for the plate, I got right in her face, and…barked. Loudly. She got saucer eyes, backed off by about 3 feet wondering what hellspawn she walked in to. She silently snuck around to the other side, I barked again and she backed off. One last time, just to make sure, she slipped out from behind the sofa. This time I just growled.

She ran and hid. 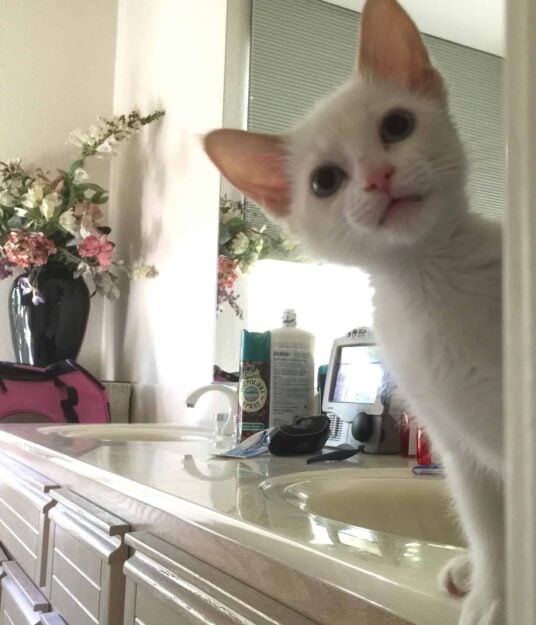 The runner up for Most-Adorable Cat

The next night she got on the chair next to me as I ate, and made not a single motion to the dinner plate. This was nearly a year ago, and I have had not a single problem since then. Not. A. One. 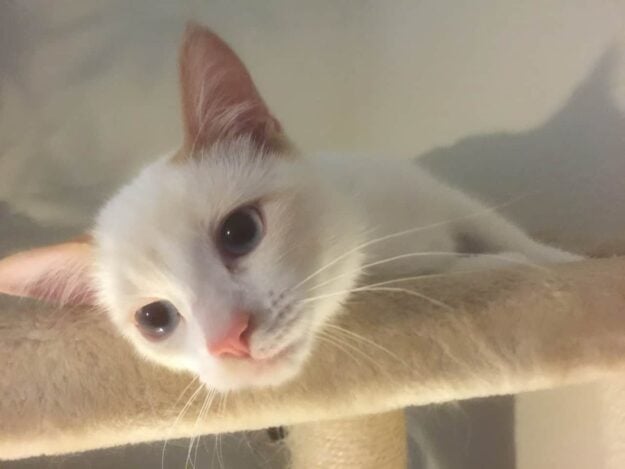 So, when I see friends who were dyed-in-the-wool cat-heads, I say to them “now I know!” Now I know how charming they can be, how infuriating, how much fun. Now I can, almost, but not quite, understand crazy cat ladies, find myself getting birthday or Christmas gifts with cats on them, space-cat socks anyone?

I knew my transformation was complete when I was in Florida last year for a fundraising event for the Astronaut Scholarship Foundation (started by a number of x-astronauts). One of the events was celebrating the 25th anniversary of the deployment of the Hubble Space Telescope. In a local planetarium the Space Shuttle crew from that mission had a panel discussion of the events surrounding the Hubble’s delivery to orbit. Right next to me was a new acquaintance and his wife. When I found out she had a cat, I pulled up one of my favorite images of Higgs, taken while he was hiding out in a spacesuit replica I have. She said: I gotta have that picture! Please send me a copy! We then both started showing various cat photos on our phones, completely ignoring the discussion about the most significant scientific instrument since Galileo’s original telescope over 400 years ago. 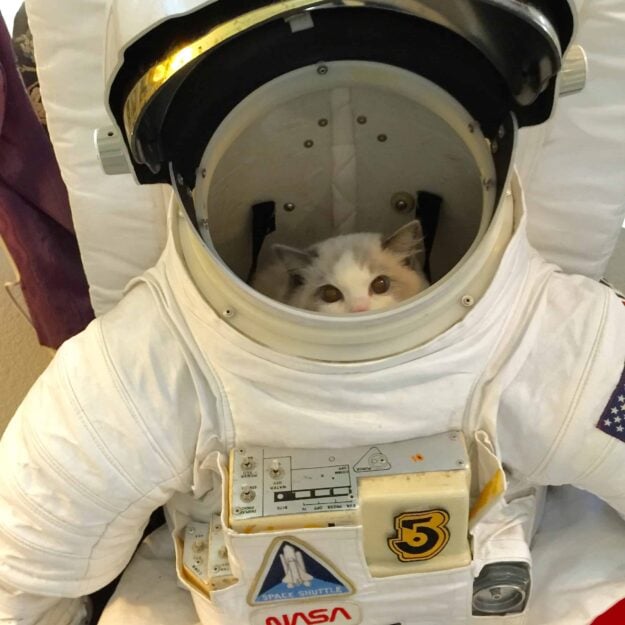 So, that’s my story. Now, to check on TinyKittens and see what I missed. 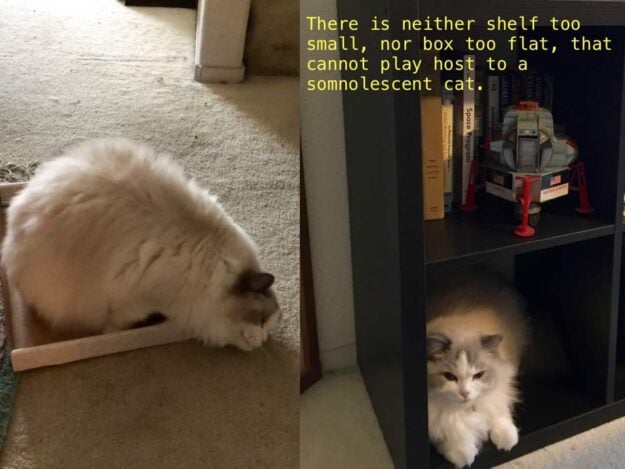 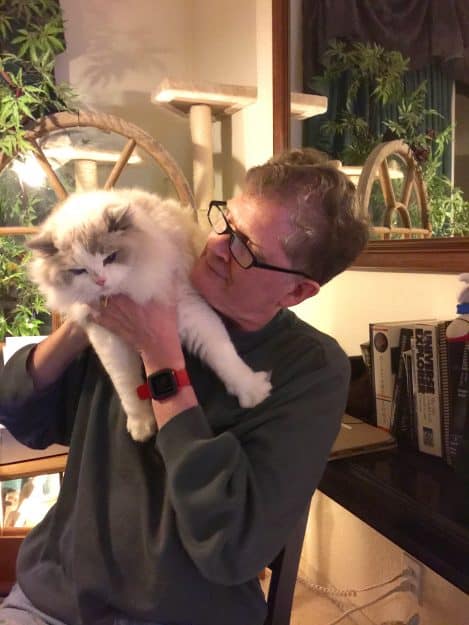